The "snows" of Africa's Mount Kilimanjaro inspired the title of an iconic American short story, but now its dwindling icecap is being cited as proof for human-induced global warming.

However, two researchers writing in the July-August edition of American Scientist magazine say global warming has nothing to do with the decline of Kilimanjaro's ice, and using the mountain in northern Tanzania as a "poster child" for climate change is simply inaccurate. 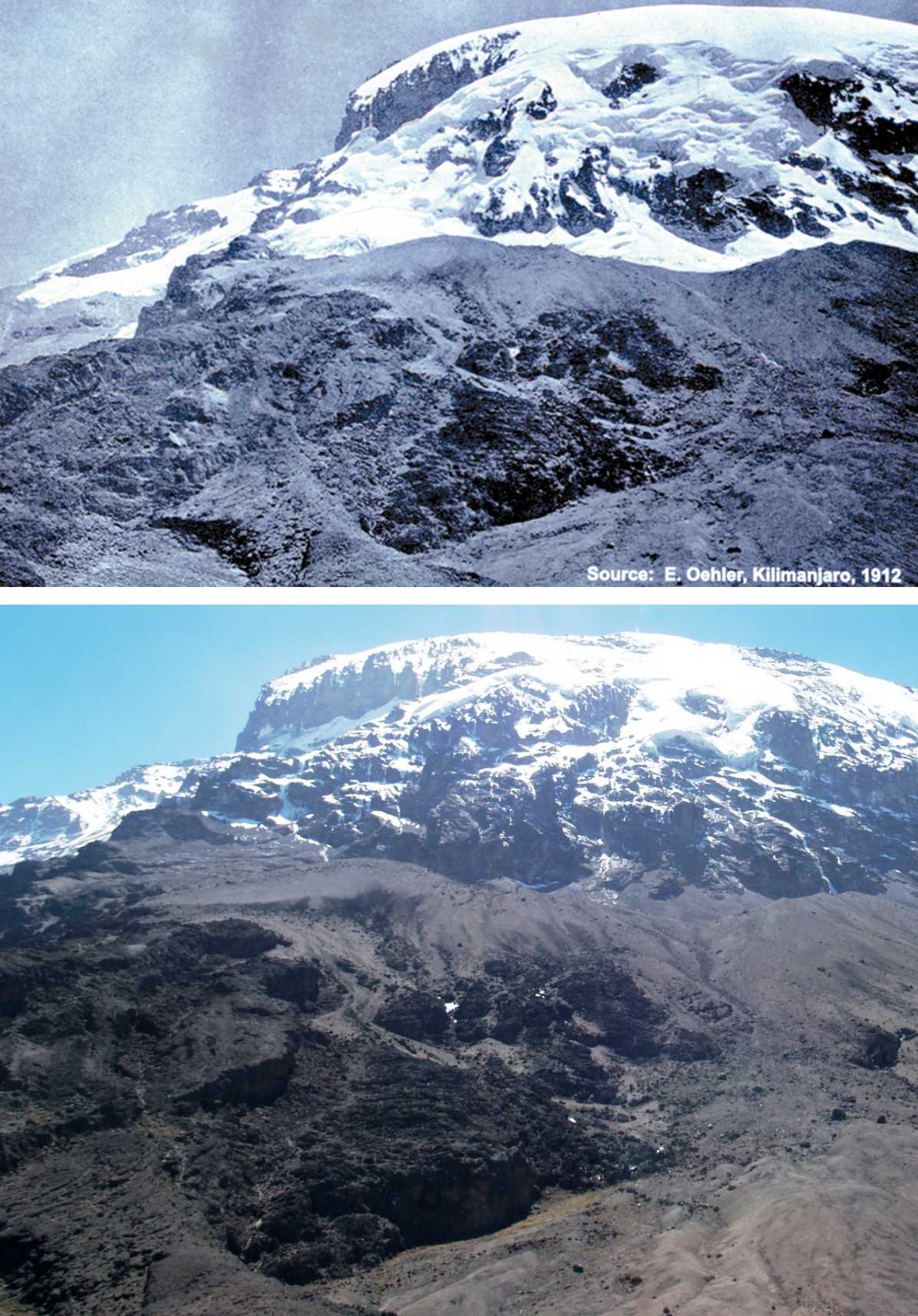 CLICK ABOVE FOR FULL SIZE.
A photograph by Edward Oehler taken in 1912 (top) shows the extent of the icecap atop Mount Kilimanjaro, and a similar photo taken in 2006 by Georg Kaser illustrates the icecap's decline

"There are dozens, if not hundreds, of photos of midlatitude glaciers you could show where there is absolutely no question that they are declining in response to the warming atmosphere," said climatologist Philip Mote, a University of Washington research scientist.

But in the tropics – particularly on Kilimanjaro – processes are at work that are far different from those that have diminished glacial ice in temperate regions closer to the poles, he said.

Mote and Georg Kaser, a glaciologist at the University of Innsbruck in Austria, write in American Scientist that the decline in Kilimanjaro's ice has been going on for more than a century and that most of it occurred before 1953, while evidence of atmospheric warming there before 1970 is inconclusive.

They attribute the ice decline primarily to complex interacting factors, including the vertical shape of the ice's edge, which allows it to shrink but not expand. They also cite decreased snowfall, which reduces ice buildup and determines how much energy the ice absorbs – because the whiteness of new snow reflects more sunlight, the lack of new snow allows the ice to absorb more of the sun's energy.

Unlike midlatitude glaciers, which are warmed and melted by surrounding air in the summer, the ice loss on Kilimanjaro is driven strictly by solar radiation. Since air near the mountain's ice almost always is well below freezing, there typically is no melting. Instead ice loss is mainly through a process called sublimation, which requires more than eight times as much energy as melting. Sublimation occurs at below-freezing temperatures and converts ice directly to water vapor without going through the liquid phase. Mote likens it to moisture-sapping conditions that cause food to suffer freezer burn.

Fluctuating weather patterns related to the Indian Ocean also could affect the shifting balance between the ice's increase, which might have occurred for decades before the first explorers reached Kilimanjaro's summit in 1889, and the shrinking that has been going on since.

Glaciers in more temperate latitudes have declined sharply as the troposphere around them has warmed (the troposphere is the atmospheric layer from the Earth's surface to about 10 miles in altitude). The best example of a glacier declining because of atmospheric warming might be the South Cascade Glacier in Washington state, perhaps the most-studied glacier in North America.

Photographs by government scientists in 1928 and in 2000, along with detailed surveys, showed that the glacier lost half its mass during that time. Similar evidence exists for a number of other glaciers, Mote said.

But in their analysis of already published research, Kaser and Mote say the same factors do not apply to Kilimanjaro's icecap, even though its decline has been cited in forums such as the Academy Award-winning documentary film "An Inconvenient Truth."

"There is no evidence to support that assertion," Mote said. "It's not that it is impossible, but rather the decline is most likely associated with processes dominated by sublimation and with an energy balance dominated by solar radiation, rather than by a warmer troposphere."

The level of nearby Lake Victoria, the world's largest tropical freshwater lake, also declined in the late 19th century, when the decline of Kibo's icecap began. The lake and the icecap likely suffer from a precipitation decline caused by Indian Ocean variability, which also could also have caused the icecap to vary in size and shape over millennia, Mote said.

"It is certainly possible that the icecap has come and gone many times over hundreds of thousands of years," he said. "But for temperate glaciers there is ample evidence that they are shrinking, in part because of warming from greenhouse gases."