draws on data for 10 key climate indicators that all point to the same finding: the scientific evidence that our world is warming is unmistakable. More than 300 scientists from 160 research groups in 48 countries contributed to the report, which confirms that the past decade was the warmest on record and that the Earth has been growing warmer over the last 50 years.

Based on comprehensive data from multiple sources, the report defines 10 measurable planet-wide features used to gauge global temperature changes. The relative movement of each of these indicators proves consistent with a warming world. Seven indicators are rising: air temperature over land, sea-surface temperature, air temperature over oceans, sea level, ocean heat, humidity and tropospheric temperature in the “active-weather” layer of the atmosphere closest to the Earth’s surface. Three indicators are declining: Arctic sea ice, glaciers and spring snow cover in the Northern hemisphere. 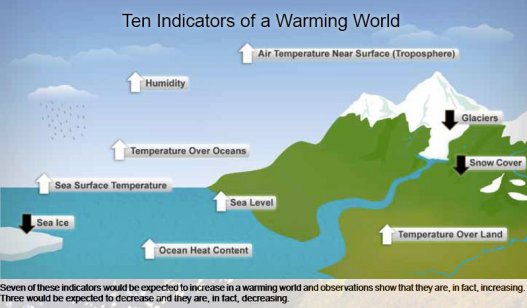 The full report can be downloaded at:
http://www.ncdc.noaa.gov/bams-state-of-the-climate/2009.php

She quotes Peter Stott, head of climate monitoring at the UK’s Met Office, one of the agencies participating:

“The whole of the climate system is acting in a way consistent with the effects of greenhouse gases.” “The fingerprints are clear,” he said. “The glaringly obvious explanation for this is warming from greenhouse gases.”

She also quotes Bob Ward, policy director of the Grantham Institute at the London School
of Economics:

“This confirms that while all of this [Climategate] was going on, the earth was continuing to warm. It shows that Climategate was a distraction, because it took the focus off what the science actually says,”

She also cites Jane Lubchenco, administrator of NOAA, who:

said the study found that the average temperature in the world had increased by 0.56° C (1° F) over the past 50 years. The rise “may seem small, but it has already altered our planet ... Glaciers and sea ice are melting, heavy rainfall is intensifying, and heat waves are more common.”

I wonder if Fiona Harvey, reporting on any other area of science would feel the need to include comments from an opposing perspective for the sake of 'journalistic balance'.  Anyway, having quoted three sources who support the science she goes on to quote three other people: Myron Ebell, Pat Michaels, Dave Herro.  And Steve Goddard.  That's some balancing act.

Myron Ebell, of the Competitive Enterprise Institute in the US, said the new report would not change people’s minds. “It’s clear that the scientific case for global warming alarmism is weak. The scientific case for [many of the claims] is unsound and we are finding out all the time how unsound it is.”

Ah! Yes!  Take the noun phrase 'global warming' and make it function as a modifier to the noun 'alarmism'.  Switch and bait - a classic propagandist tactic.  No claim was made against global warming, only against alarmism.  Cute!

Pat Michaels, a prominent climate sceptic, ex-professor of environmental sciences and fellow of the Cato Institute in the US, said the NOAA study and other evidence suggested that the computerised climate models had overestimated the sensitivity of the earth’s temperature to carbon dioxide. This would mean that the earth could warm a little under the influence of greenhouse gases, but not by as much as the IPCC and others have predicted.

Well, when the ice is gone and the warming Arctic Ocean starts belching out its load of CO2 we will see just exactly how sensitive our climate is to CO2.  I don't think we have long to wait before the conclusive experimental results are in.

Is that because NOAA doesn't dabble in the hyper-ethical, squeaky-clean financial markets?

Steve Goddard, a blogger, said the conclusion that the first half of 2010 showed a record high temperature was “based on incorrect, fabricated data” because the researchers involved did not have access to much information on Arctic temperatures.

And of course, those record high temperatures must be fake, else they would have been reported in the media.  Notoriously cold places like Russia would be having heatwaves.  If CO2 is driving global warming, then theory says that the Arctic will warm fastest and there will be reports of more tundra and taiga fires than normal at least in Arctic and sub-Arctic Canada and Siberia.  Countries which are normally hot should be reporting how global warming is causing desertification.

Of course, any proof that 2010 is hot can be discounted unless we have 'on the ground' evidence that it really is worse than other years - which it can't be, given the irrefutable fact that there has been a forecast of cold weather in the Andes during southern winter.


I wonder how far the 'fabricated data' conspiracy goes.  Could it really be true that all of the world's industrialized nations are conspiring together to convince the people of small
island states that their island homes are going to vanish underwater due to global warming?

And when I look out of my virtual spacecraft window at a rapidly changing planet: is that MODIS Rapidfire image of a circumnavigable melting ice-cap and out-of-control fires a picture of the reality of global warming, or just more 'fabricated data'? 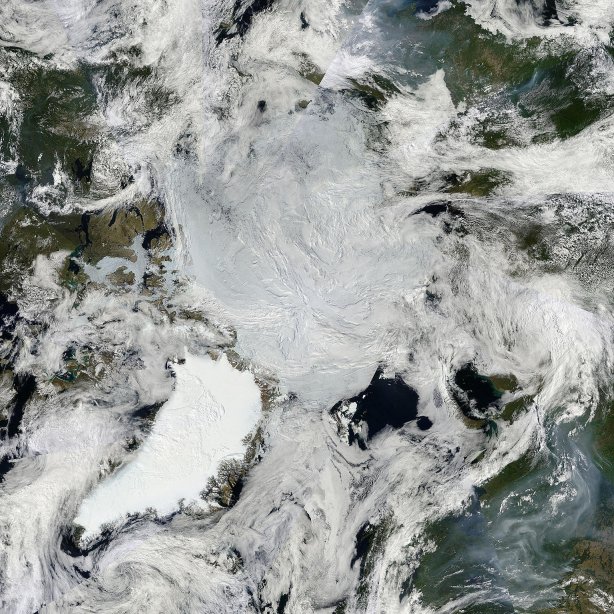