Nanoscale magnets in the form of iron-containing molecules might be used to improve the contrast between healthy and diseased tissue in magnetic resonance imaging (MRI)--as long as the concentration of nanomagnets is carefully managed--according to a new report* by researchers at the National Institute of Standards and Technology (NIST) and collaborators. Molecular nanomagnets are a new class of MRI contrast agents that may offer significant advantages, such as versatility in design, over the compounds used today. 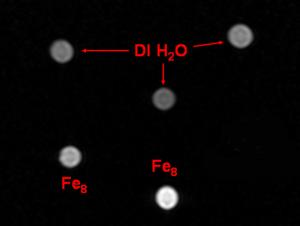 Contrast agents are used to highlight different tissues in the body or to help distinguish between healthy and diseased tissue. NIST is working with two universities and a hospital to design, produce and test nanomolecules that might make MRI imaging more powerful and easier to perform. The new paper resolves a debate in the literature by showing that iron-containing magnets just two nanometers wide, dissolved in water, do provide reasonable contrast in non-clinical MRI images--as long as the nanomagnet concentration is below a certain threshold. (A nanometer is one billionth of a meter.) Previous studies by other research groups had reached conflicting conclusions on the utility of molecular nanomagnets for MRI, but without accounting for concentration. NIST scientists, making novel magnetic measurements, were able to monitor the molecules' decomposition and magnetic properties as the composition was varied.

The injectable dyes currently used as MRI contrast agents are of two types. Magnetic ions, which alter the nuclear properties of hydrogen in water, offer the advantage of consistent identical design but provide low contrast. The second category encompasses particles of thousands of atoms or crystals, which alter local magnetic fields; they provide contrast variation in a larger region but have irregular designs and magnetic properties that are difficult to control. By comparison, molecular nanomagnets can be designed to have consistent properties and high contrast. In addition, they might be modified to act as "smart" materials whose contrast could be turned on only when bonded to a target molecule or cell. Toxicity is not believed to be an issue, because iron is naturally found in the body and other studies have found that these materials are non-toxic at the concentrations used in MRI.

NIST works with Florida State University to make single-molecule magnets less than five nanometers (nm) in diameter, and works with the University of Colorado at Boulder to make nanocrystals in the 10-50 nm range. The agency is pioneering methods for manipulating and measuring the magnetic properties of these compounds and is developing instrumentation for understanding how contrast agents work and how to control contrast properties. Researchers correlate the measured properties to the observed MRI response under non-clinical conditions using imagers at The Children's Hospital in Denver. The information gained is fed back into recipes for making even better nanomagnets. The work described in the new paper was supported in part by the National Science Foundation.