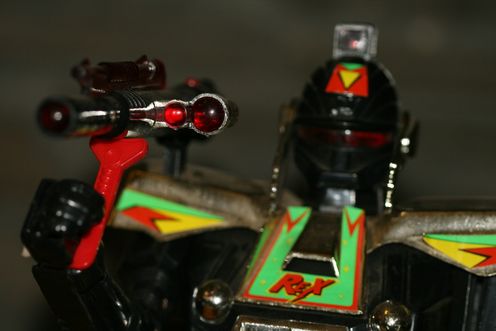 Nano-robots have cancer in their sights. Credit: StephenMitchell/Flickr, CC BY-NC-ND

It sounds like a scene from a science fiction novel – an army of tiny weaponized robots traveling around a human body, hunting down malignant tumours and destroying them from within.

But research in Nature Communications from the University of California Davis Cancer Centre shows the prospect of that being a realistic scenario may not be far off. Promising progress is being made in the development of a multi-purpose anti-tumor nanoparticle called “nanoporphyrin” that can help diagnose and treat cancers.

Cancer is the world’s biggest killer. In 2012, an estimated 14.1 million new cancer cases were diagnosed and around 8.2 million people died from cancer worldwide.

This year, cancer surpassed cardiovascular diseases to become the leading cause of death in Australia; 40,000 Australians died as a result of cancer last year. It’s no wonder that scientists explore every possible technology to efficiently and safely diagnose and treat the disease.

Nanotechnology is one such revolutionary cancer-fighting technology.

A nanometer is a very small unit of length, just one billionth of a meter. Nanotechnology looks at building up incredibly tiny, nano-level structures for different functions and applications.

How small is a nanoparticle, really?

One such nanoparticle-based application is the development of precise cancer diagnostic technology and safe, efficient tumor treatment. The only problem is nanoparticles must be tailored to specific jobs. They can be time-consuming and expensive to research and build.

So how do nanoparticles work? They can be made using inorganic or organic components. Each has different properties:

The new organic nanoparticle – nanoporphyrin – can do all this.

Ins and outs of nanoporphyrin

Nanoporphyrin is only 20-30 nanometers in size. If you want to get technical, it’s a self-assembled micelle consisting of cross-linkable amphiphilic dendrimer molecules containing four porphyrins. If you want to get less technical, it’s a loosely bound group of molecules (or “micelle”) with their hydrophilic (“water-loving”) heads pointing outwards and their hydrophobic (“water-hating”) tails pointing inwards. Each molecule contains organic compounds called porphyrins. Porphyrins can occur naturally, the best-known being heme, the pigment in red blood cells.

Nanoporphyrin’s small size gives it an intrinsic advantage as it can be engulfed by and accumulate in tumor cells, where it can act on two levels:

Armed and dangerous (to tumors)

Functional nanoparticle processes can be similar to those of an armed nano-robot. For example, when a tumor-recognition module is installed in a delivery nano-robot (organic particle), the armed drug-loaded nano-robot particles can target and deliver the drug into tumor tissue. They kill only those cells, while being harmless to surrounding healthy cells and tissues.

If a tumor-recognition module is installed in a probe nano-robot (inorganic particle), the armed nano-robot particles can get into tumor tissue and activate a measurable signal to help doctors better diagnose tumors.

The production of nanoporphyrin is an efficient strategy in the development of multifunctional, integrated nanoparticles. The same strategy could be used to guide further versatile nanoparticle platforms to reduce nanomedicine costs, develop personalized treatment plans and produce self-assessing nanomedicines.

Jason Liu, Postdoctoral Researcher in Nanoparticles at Monash University, does not work for, consult to, own shares in or receive funding from any company or organization that would benefit from this article, and has no relevant affiliations.