Sascha Vongehr
Nanotechnology is my own field of research for 12 years now. It is one of the, if not the most important of the emerging technologies, and it is widely believed to be the vital ingredient to many by transhumanists desired transformations, be it slowing down aging, computer to brain network-neuron interfaces, or the development of ever faster (quantum) computers. Nano is still the big buzz word and I am afraid to have become the uninvited party-pooper.

I do not so much take issue with the dangers per se, say horror scenarios of self-reproducing nano-robots turning planet earth into a gray soup of nanobots or the total lack of co-evolution of our Pleistocene bodies with non-organic nano-structures. The more general problem relevant to the ethics of emergent technologies is that nanotechnology is widely acknowledged to be potentially dangerous, but there is no oversight. Can one trust the field to be self-monitoring, self-regulating? 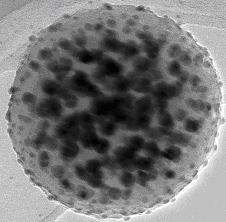 Nano-porous micro-carbon sphere with only 500 nanometers diameter and metal nano-particles in its interior. We make such highly catalytic (read: bio active) structures with help of a conventional kitchen microwave, 100000000000000 in five minutes, easily scalable. The metals involved here are from salt solutions with low concentrations like those in foods. Vitamin C can be the necessary so called ‘reducer’ (turning salts into metals) and it occurs in high concentrations in many foods. We do not know why microwaves are necessary or what such compounds would do if digested, nor are there tests for unknown nano-compounds in microwaved food.

For trusting self-regulation, it would be nice to have some indications for nanotechnology being an especially trustworthy field, open to criticism and rational discourse, upholding the scientific ideals, the scientific method and integrity. However, I cannot but report some very disconcerting insights: nanotechnology comes probably in last according to those parameters. We should be worried!

My disappointment with ethical aspects started early on in the field when I witnessed how experimentation is done and how the publishing game works. These issues have only worsened over time. However, nothing compares to how bad it turns out if you try your luck on critical work in this field. Looking back over the years, my personal experience adds up to a very odd picture: An almost strict anti-proportionality between the significance and scientific rigor of work on one hand and the ease of publication and success to get noticed at all on the other!

Critical articles have been over and over rejected. It took almost five years to publish on dubious statistical methods employed in a sub-field I know extremely well and have contributed interesting discoveries to. And no, it was not by finally passing proper peer-review, but I am not at liberty to discuss details, except for that the journal is a Chinese one that nobody in the field reads!

Scientific work is quite generally seldom ever rejected for actual mistakes, which may perhaps not surprise many readers after the recent obviously flawed claims about arsenic based life forms made it all the way to Science, NASA, and many a news front pages. Critical work is plainly unable to overcome potentially criticized people’s power over the whole publish-or-perish (what I like to call POP-science)process and so called ‘peer review’. Critical work is effectively made invisible.

Call me a masochist if you like, but I tried another project that directly showed flawed conclusions being drawn in specific published papers. Suchlike, at least that is supposedly usual practice, should be published in the same journals as the original work of course. Again, the sociological aspects constraining nanotechnology made sure that we needed two years in order to finally be able to only publish it in a journal that, again, nobody in the relevant sub-field reads.

Sure, you are free to assume the work is really bad, but consider that we encounter few problems to publish much less rigorous or significant stuff in prestigious journals. The most prestigious journal in the field of microscopy just published an article by us and the work even already spawned a book chapter; this work took a tenths of the time to complete, is far less significant than the two critical papers mentioned above, but encountered no problems publishing it. If you believe that the presumed quality of a journal is somehow related to whatever value, we seem to be able to ensure such dubious ‘quality’ if we want to. Call me stupid or obsessed if you must, but I refuse to go down that path.

Please do not get me wrong here – I am not out to receive your pity. My point here is strictly to show a moral deficit especially in nanoscience, i.e., I claim that conditions are worse than in medicine, or say string theory, a field that I have also personally worked in. To do so, we are now on a third project of criticizing a widely hyped recent discovery and relating it with the nanotechnology culture of much flawed research and largely non-reproducible experimental ‘results’. I work in the field and know exactly what I am talking about here, and I have tentatively criticized some of it before on the web [e.g. (1),(2),(3)].

In the newest project, we discuss in detail that it is especially fields like nanotechnology where experimental results lack reproducibility and theory is often a pseudo-scientific tossing about of meaningless formulas. Scientific integrity as such (say concerning plagiarism, cheating, the value of honest statistics, importance of meaningful accuracy estimations and reproducibility) has been bred away by the nature of nanotechnology’s subject matter combined with a selective environment that is almost pure publish-or-perish (POP) culture.

In other controversial, high stakes and ultra competitive fields like high energy particle physics, POP undermines the science too, but reproducibility for example is still highly valued and the mathematics of a string theoretical paper can and will be checked. In nanoscience, this looks very different.

POP culture turned science into an endeavor where deception is vital to get ahead, and nanotechnology ranks as one of the worst. A scientific field that has evolved this far into being a structure where deception is basically systemic cannot be trusted to self-regulate. No conspiracy theory here folks! This is plain evolution and sociology. It is not about bad people I do not like because they have crossed me. No no – these are normal people getting on with their stressed lives. The idea to criticize or be at all concerned about potential dangers plainly does not cross their minds.

I am playing with the thought of not letting it all just rot again for years in my drawer. If large reader interest should exist, I will develop it right here.