As humans exert ever-greater influence on the Earth, their preferences will play a substantial role in determining which other species survive. New research shows that, in some cases, those preferences could be governed by factors as subtle as small color highlights a creature displays.

In the case of penguins, mostly black-and-white flightless birds that live predominantly in the Southern Hemisphere, those most popular with humans appear to be the ones that display markings of warm colors such as red, orange or intense yellow, said David Stokes, a conservation biologist at the University of Washington, Bothell. 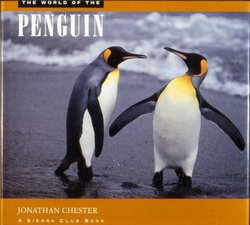 The cover of "The World of the Penguin" by Jonathan Chester, published by the Sierra Club in 1996, features Emperor penguins with orange and bright yellow neck and ear patches. The book is one of four used to judge the attractiveness to humans of various penguin species. (Jonathan Chester)

He and his undergraduate students calculated the popularity of various species by studying photographs in four large-format photograph books about penguins. Decisions about how many and which photographs to use and how large to make them presumably were made by the books' editors based on their own preferences or on their beliefs of what would appeal to the book-buying public.

"Penguins are lucky because they are popular with people, especially right now. But that's not true of 99.9 percent of the species out there," Stokes said. "Even the penguin species I found to be among the least appealing to people are tourist attractions."

Tops on the list are the Emperors, featured in the film "March of the Penguins," and their close cousins the King penguins. Second are crested penguins, including Rockhoppers and Macaroni.

Species at the bottom of the list are Adelie, Yellow-eyed and Little Blue. Stokes was surprised by the relative lack of popularity of Adelie penguins because that species is probably the most familiar to the public.

There are 17 penguin species, and in the past some were hunted for food or boiled to extract their oil. Some species now struggle to survive climate change, changing food patterns and encounters with humans or human activity, such as oil drilling at sea.

The species are fairly similar, with some larger and some smaller, Stokes said. But the ones that appear to be most popular are the ones that display the warmest colors in the upper body, the neck and head. He likened the effect to that of a man in a tuxedo pinning on a red carnation. Unlike some other types of animals, human preference for particular penguin species does not seem to be driven by a "cuteness" factor.

The four books Stokes examined were published in the last decade and were aimed at the popular adult audience. He eliminated photographs from consideration when factors other than the penguins themselves -- the surrounding landscape, for example, or accompanying humans -- could have played a role in their selection. He was left with 304 pictures that clearly showed specific penguin species, and he concluded that a species' popularity wasn't because it was easy to get to, or because it had the largest population, or because of similar factors.

"I went to great lengths to ensure that what I was looking at was a purposeful set of pictures and not one just based on logistics," he said. The popularity rankings were similar across all four books, he added, which suggests that human preferences could be widely shared.

The work has been published in the online edition of the journal Human Ecology, and will appear in an upcoming print edition.

Color is not the only factor that determines a species' attractiveness to humans. Characteristics such as size and neoteny -- the retention of babyish physical traits such as large eyes and large head -- also can play major roles for some animals. Pandas, zebras and elephants, for example, are black and white or gray but are highly preferred by humans. Millions of insects and the countless slimy invertebrates that occupy the oceans are likely not as lucky, Stokes said.

"The work pretty conclusively shows there is a large difference of appeal among organisms, even among closely related organisms," he said. "For different kinds of organisms, different qualities seem to cause differences of appeal."

The work is a signal to conservationists to be mindful of the role of public popularity, and what might cause it, when making decisions about how to deal with various species, even invasive species. He noted that mountain goats introduced to Olympic National Park in Washington state have damaged park ecosystems, but because of their popularity it has been difficult for park managers to remove them. Likewise, while groups of conservationists gather on weekends to pull invasive English ivy from trees and shrubs on public lands, some homeowners continue to plant the attractive vine in their yards, where it can spread to the wild.

"We do have these big differences in how we feel about living things," Stokes said. "These feelings are going to play a big role in what we choose to conserve."

Note: This article has been adapted from a news release issued by University of Washington.