Australian Skinks And Why Some Species Are More Diverse Than Others
By News Staff | September 19th 2007 06:01 PM | Print | E-mail

A new study of finger-sized Australian lizards sheds light on one of the most striking yet largely unexplained patterns in nature: Why is it that some groups of animals have evolved into hundreds, even thousands of species, while other groups include only a few?

The study takes a look at Australia's most diverse group of vertebrates -- more than 252 species of lizards called skinks. Researchers at the Cornell Lab of Ornithology have found evidence that the "drying up" of Australia over the past 20 million years triggered this explosive diversification. 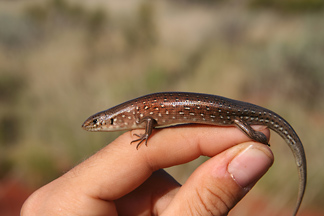 Skinks have incredible species diversity throughout the Australian deserts. In fact, this group contains so many species that most do not even have a common English name. Pictured is a leopard skink. Credit:Dan Rabosky

Lead author Dan Rabosky, a Cornell graduate student, spent many months in the remote Australian outback, trapping skinks as they skittered from one prickly clump of grass to another. By documenting where the various skink species live and using their DNA to define their evolutionary tree, he found that the groups with the most species are those that live in the driest parts of Australia.

"There's something about colonizing the desert that caused these skinks to diversify at an incredibly high rate," said Rabosky.

An unusual finding of this study is that these skinks upend the usual pattern of species diversity found in other parts of the world.

"We typically think of lush tropical rainforests as being the world's major centers of diversity," said co-author Irby Lovette, director of the laboratory's Fuller Evolutionary Biology Program. "With the skinks, just the opposite has happened: The rainforest skinks in Australia have much lower diversity, and a lot of the evolutionary 'action' in this system is taking place in the deserts."

Over the last 20 million years, most of Australia has changed from humid and tropical to bone-dry desert. "Living in the desert is stressful for animals that are adapted for wetter habitats," said Rabosky. "But somewhere in the distant past, a few skinks developed the ability to survive in their increasingly arid world."

It is the descendents of these few early desert colonists that evolved into amazingly large numbers of skink species, say the researchers.

"Australian skinks are really fascinating," Rabosky said. "Two groups in particular have gone evolutionarily crazy, each splitting into as many as 100 different species. In contrast to skinks on other continents, and even some other groups in Australia, the diversity of these particular groups has really exploded."

Rabosky's study included skinks with spots, stripes, four legs, two legs and no legs. Rabosky said that there are at least 252 species of these lizards living down under, and probably many more that remain to be discovered.

The evolution of these skinks, he said, mirrors that of many groups of organisms -- from grasses and beetles to humans and our relatives -- in which some groups have spectacular diversity and others a paucity of species.

"For me as a scientist," said Rabosky, "one of the great things about skinks is that there are just so darn many species, making the patterns in their diversity really clear."