While the human species is unquestionably a member of the Primate group, the identity of the next closest group to primates within the entire class of living mammals has been hotly debated. Now, new molecular and genomic data gathered by a team including Webb Miller, a professor of biology and computer science and engineering at the Penn State University, has shown that the colugos -- nicknamed the flying lemurs -- is the closest group to the primates. The team was led by William J. Murphy, associate professor in the Department of Veterinary Integrative Biosciences at Texas A & M University.

Debates over which of several mammalian groups is the closest relative to the primates have become more intense in the last ten years because of new fossil and molecular evidence. Some scientists have suggested that the group Scandentia, which includes the small tree shrews that scamper up and down trees in Asia, deserves the honor. Tree shrews have fluffy tails, long, pointed snouts, and a very large brain size for their body size. 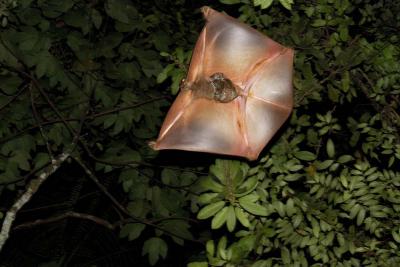 Colugos glide from tree to tree in Malaysia forests using their special skin fold, or patagium, for support. This mother and baby (Cynocephalus variegatus) looks like a living kite but is closely related to primates, the order of mammals that includes lemurs, monkeys, apes, and humans. Credit: Norman Lim, National University of Singapore

Others scientists favor dermopterans, a relatively little-known group that includes two living species of colugos in southeast Asia. Although colugos are colloquially termed "flying lemurs," they are not lemurs and they do not fly. Instead, they have a specialized skin fold, called a patagium, that stretches from the neck to the forelimbs, back to the hindlimbs, and finally to the tail. A colugo gliding from tree to tree at dusk uses its patagium for support and resembles nothing so much as a furry kite.

Since 1999, all three groups -- primates, scandentians, and dermopterans -- have been recognized as comprising a single taxonomic unit, or clade, known as Euarchonta, or "true ancestors." The exact evolutionary relationships among the three groups within Euarchonta have proven elusive due to their overall closeness and the existence of a number of features that are shared among the groups. "The triad of the Euarchonta was too important to let this question remain unresolved," Miller said.

Three hypotheses have been generated by researchers prior to this study. The "Primatomorpha hypothesis" is that colugos and primates together comprise a single group, the Primatomorpha, which separated evolutionarily from a common ancestor with the tree shrew group. A second hypothesis is that tree shrews and colugos -- inhabiting the geographic region known as Sunda and having many features in common -- are more closely related to each other than to primates. Thus, in this "Sundatheria hypothesis," primates split off from the sundatherians, which later subdivided into scandentians and dermopterans. The third hypothesis is that primates are most closely related to tree shrews alone, with colugos being more distant from both, which can be called the "tree shrew hypothesis."

"We decided to design an exacting study that would test the three hypotheses using two independent molecular approaches," explains Miller. "Before evaluating the different hypotheses, we wanted to make sure that the Euarchonta was, indeed, a valid evolutionary group that had arisen from a single ancestral lineage," Miller said. The team screened a set of 197,322 known exons -- areas of the human genome that code for proteins -- looking for insertions or deletions -- collectively called "indels" -- which are rare genetic changes. From 300 candidate indels, the team found 196 that potentially could indicate the validity of the Euarchonta group and could determine primate affinities. Unfortunately, many of the 196 indels were not informative or were so variable as to give ambiguous answers. After eliminating those 196 indels, and adding genomic information from a number of living primates for comparison, the team found strong support for the growing consensus that the Euarchonta was a valid clade.

The reseachers then analyzed the rare genetic changes to see which indels were shared by which groups. Seven rare genetic changes showed a close relationship between primates and colugos, supporting the idea that the Primatomorpha is a valid taxonomic group within the Euarchonta. Only one indel suggested a closer relationship between tree shrews and primates than between colugos and primates. No indels supported the idea that tree shrews and colugos together made a single group, Sundatheria, that was the sister group to primates.

"In short, these molecular data strongly suggest that colugos are the sister group to primates," says Miller. "Primatomorpha is a valid term and the Primatomorpha hypothesis is well-supported by the indel data."

To confirm this conclusion, the team turned to a second approach using genomic data. They assembled and analyzed a 14-kilobase dataset from nineteen nuclear gene fragments from two genera of living colugos, three living tree shrews, and six living primates. The genomic data also were used in a molecular-clock analysis to estimate divergence times of the difference branches within the Euarchonta group.

"Based on these data, the most probable phylogeny is that the Euarchonta arose as a distinct taxonomic group at 87.9 million years ago -- during the heyday of the dinosaurs, more than 20 million years before they went extinct," Miller said. This fundamental divergence was followed relatively rapidly by the separation, about 86.2 million years ago, of the Scandentia group --which included tree shrews and their relatives -- from the Primatomorpha group -- which includes primates and some gliding mammals (dermopterans). Within the Primatomorpha, the split between primates and dermopterans came at about 79.6 million years ago. These rapid-fire evolutionary divergences left relatively short periods of time for genetic differences to accumulate, which is why the team needed to use two different approaches to resolve the triad question.

A surprising by-product of the study -- with implications for species-conservation efforts -- was genetic information emphasizing the uniqueness of the pen-tailed tree shrew, which is represented by a single living species, Ptilocercus lowii. The pen-tailed tree shrew diverged from the other tree shrews approximately 63.4 million years ago, near the boundary between the Cretaceous and Tertiary periods. "Because this is such an early divergence, and because the only living species in this group is found in lowland forests in a restricted part of southeast Asia, we suggest that a global priority be placed on the conservation of this species and its habitat," Murphy says.

Further, because of the new-found importance of understanding colugos as the nearest relative to primates, the team urges that a draft genome of a colugo be established as soon as possible. According to Miller, "colugos are going to be much more important species to study now that we know their relationship to primates."

In addition to Miller and Murphy, other researchers on the project include the paper's first author, Jan E. Janecka, a post-doctoral fellow in the Department of Veterinary Integrative Biosciences at Texas A & M University; Thomas H. Pringle, the founder of the Sperling Foundation of Eugene, Oregon; Frank Wiens of the Department of Animal Physiology at the University of Bayreuth in Germany; Mark S. Springer, professor of biology at the University of California, Riverside; Annette Zitzmann, of the Zoological Institute at Johann Wolfgang Goethe-University in Frankfurt, Germany; and Kristofer M. Helgen, an affiliated scientist of the National Museum of Natural History at the Smithsonian Institution.

The study was supported by National Science Foundation grants to William J. Murphy and Mark S. Springer, as well as by a National Institutes of Health grant to Webb Miller. Access to unpublished sequence data was provided by the Broad Institute of the Massachusetts Institute of Technology and Harvard University, the Human Genome Sequencing Center at the Baylor College of Medicine, and the Washington University Genome Sequencing Center.

A paper announcing the results will be published in the journal Science on 2 November, 2008.