Earth generates a strong magnetic field extending from the core out into space that shields the atmosphere and deflects harmful high-energy particles from the Sun and the cosmos. Without it, our planet would be bombarded by cosmic radiation, and life on Earth's surface might not exist. The motion of liquid iron in Earth's outer core drives a phenomenon called the geodynamo, which creates Earth's magnetic field. This motion is driven by the loss of heat from the core and the solidification of the inner core.

But the planet's inner core was not always solid. What effect did the initial solidification of the inner core have on the magnetic field? Figuring out when it happened and how the field responded has created a particularly vexing and elusive problem for those trying to understand our planet's geologic evolution, a problem that Carnegie's Peter Driscoll set out to resolve. 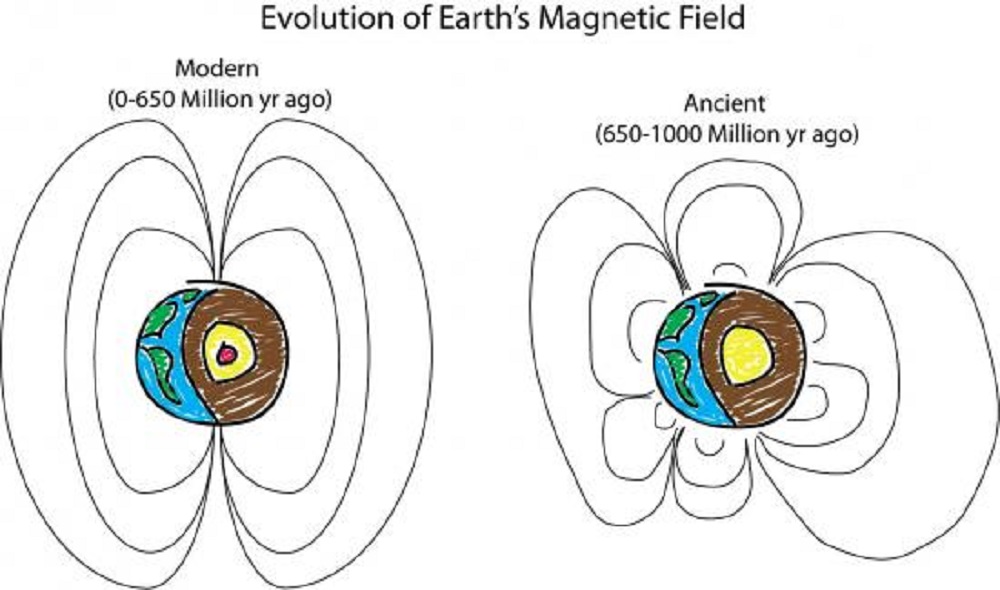 Here's the issue: Scientists are able to reconstruct the planet's magnetic record through analysis of ancient rocks that still bear a signature of the magnetic polarity of the era in which they were formed. This record suggests that the field has been active and dipolar--having two poles--through much of our planet's history. The geological record also doesn't show much evidence for major changes in the intensity of the ancient magnetic field over the past 4 billion years. A critical exception is in the Neoproterozoic Era, 0.5 to 1 billion years ago, where gaps in the intensity record and anomalous directions exist. Could this exception be explained by a major event like the solidification of the planet's inner core?

In order to address this question, Driscoll modeled the planet's thermal history going back 4.5 billion years. His models indicate that the inner core should have begun to solidify around 650 million years ago. Using further 3-D dynamo simulations, which model the generation of magnetic field by turbulent fluid motions, Driscoll looked more carefully at the expected changes in the magnetic field over this period.

"What I found was a surprising amount of variability," Driscoll said. "These new models do not support the assumption of a stable dipole field at all times, contrary to what we'd previously believed."

His results showed that around 1 billion years ago, Earth could have transitioned from a modern-looking field, having a "strong" magnetic field with two opposite poles in the north and south of the planet, to having a "weak" magnetic field that fluctuated wildly in terms of intensity and direction and originated from several poles. Then, shortly after the predicted timing of the core solidification event, Driscoll's dynamo simulations predict that Earth's magnetic field transitioned back to a "strong," two-pole one.

"These findings could offer an explanation for the bizarre fluctuations in magnetic field direction seen in the geologic record around 600 to 700 million years ago," Driscoll added. "And there are widespread implications for such dramatic field changes."

Overall, the findings have major implications for Earth's thermal and magnetic history, particularly when it comes to how magnetic measurements are used to reconstruct continental motions and ancient climates. Driscoll's modeling and simulations will have to be compared with future data gleaned from high quality magnetized rocks to assess the viability of the new hypothesis.