Paleomagnetists Create Controversy So They Can Solve It
By Hank Campbell | October 2nd 2009 12:19 PM | Print | E-mail

Hank Campbell
Did you even know there was a discipline called paleomagnetics?   Probably not.(1)   It isn't easy to find a category on this site to put it in, that's for sure.

But a discipline it is and it even has its own controversies, as all science must; namely, the nature of Earth's magnetic field 1.1 billion years ago.

The Earth's magnetic field in two sentences:   it wraps around the globe and helps shield us from cosmic rays - lest we all burst into flame or turn into orange rock and say things like, "It's clobberin' time!"


If you don't have superpowers or look like a Jack Kirby drawing, blame Earth's magnetic field. ©  Marvel Comics and/or Disney, depending on when you read this article.

The magnetic field is a result of the planet's iron core, the spinning of the Earth and differences in temperature between the inner core's outer layers and the lower mantle.

By examining t the 1.1 billion-year-old volcanic rocks on the north shore of Lake Superior, they say they have found that Earth's ancient magnetic field was a geocentric axial dipole -  that's a large bar magnet centered in the core and aligned with the Earth's spin axis.

So what's the rumpus?   Earlier studies of those same rocks led researchers to believe that the magnetic field of ancient Earth had four or even eight poles, which meant that modern models of the supercontinents that relied on that paleomagnetic data and its axial dipole assumption were wrong.

Nope, says the new report in Nature Geoscience, those other researchers were just confused by the migration of the continent toward the equator in the past.

Why does it matter?   If we don't know how continents moved in the past and how they massed to form supercontinents, we can't accurately model ocean currents, global average temperatures and wind patterns - which means models of ancient climate would be a lot less made up than they are right now.

You may not have heard of paleomagnetics before but how they deduced this was interesting.   They studied the lava flows near previously mentioned Lake Superior, obtained magnetic measurements and used magnetic minerals within the rocks to record the orientation of the geomagnetic field at the time the rocks erupted onto the Earth's surface.

Clever, right?  Using the layers, they were able to track how the Earth's magnetic poles have flipped over the eons, when the North Magnetic Pole became the South Magnetic Pole and so on. They studied three of these reversals that occurred over a few million years.

According to recent hypotheses, a supercontinent known as Rodinia (a Russian word meaning “homeland”) existed between 1 billion and 800 million years ago.  As it broke up, and the climate cooled 700 million years ago, it is believed the the rapid evolution of primitive life began. 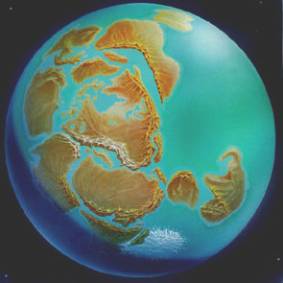 Artist’s conception of the supercontinent Rodinia circa 750 million years ago.  What will be North America lies in the center of the surrounding lands. Original painting by Tomo Narashima.

You've probably heard of the  Pangaea supercontinent which came together about 300 million years ago and scientists learned about Rodinia in much the same fashion - detective work  comparing rocks with similar geological features that are now widely dispersed.

That means the science of ancient geology can be a lot more ... scientific.

(1) Princeton had a paranormal research group for 40 years also.  They cover all the bases.
Science 2.0
More Articles All Articles
About