A new study increases and strengthens the links that have led some to propose the "transposon theory of aging" centering on the rogue elements of DNA that break free in aging cells and rewrite themselves elsewhere in the genome.

They believe this is potentially creating lifespan-shortening chaos in the genetic makeups of tissues.

As cells get older, prior studies have shown, tightly wound heterochromatin wrapping that typically imprisons transposons becomes looser, allowing them to slip out of their positions in chromosomes and move to new ones, disrupting normal cell function. Meanwhile, scientists have shown that potentially related interventions, such as restricting calories or manipulating certain genes, can demonstrably lengthen lifespans in laboratory animals.

"In this report the big step forward is towards the possibility of a true causal relationship," said Dr. Stephen Helfand, Brown University professor of biology and senior author of a new study in the Proceedings of the National Academy of Sciences. "So far there have been associations and suggestions that to all of us make sense, but the difference in science is that you need the data to back up your opinion." 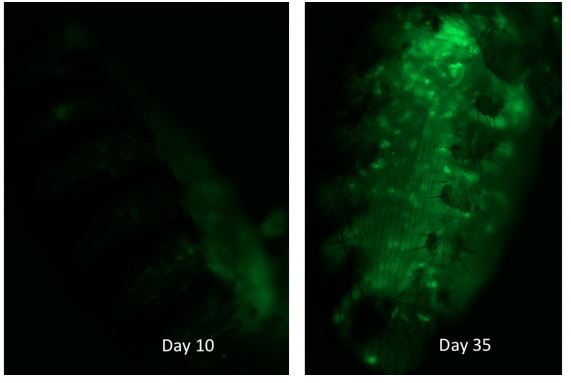 Fluorescence in the fat body of fruit flies tracks the activity of transposable elements of DNA. It increases markedly with age. Credit: Jason Wood/Brown University

Many lines of evidence

The new results, led by faculty investigator Jason Wood, come from several experiments that are thorough and direct in connecting the dots among weakening heterochromatin, increased transposon expression, aging and lifespan.

In one set of experiments, the team visually caught transposable elements in the act of jumping around in fruit flies as they aged. They inserted special genetic snippets into fat body cells, the equivalent of human liver and fat cells in flies that would glow bright green when specific transposable elements move about in the genome. Under the microscope the scientists could see a clear pattern of how the glowing "traps" lit up more and more as the flies aged.

The increase in transposon activity was not steady as flies grew older. "Flies reach a certain age and then it takes off more exponentially," Wood said. The data show that the timeframe in which transposable element activity really begins to increase is tightly correlated with the time when the flies start to die.

Several experiments in the paper also show that that a key intervention already known to increase lifespan, a low-calorie diet, dramatically delays the onset of increased transposon activity.

To further explore the connection between transposon expression and lifespan, the team tested the effects of manipulating genes known to improve heterochromatin repression that are not only found in flies, but also in mammals. For example, increasing expression of the gene Su(var)3-9, which helps form heterochromatin, extended maximal fly lifespan from 60 to 80 days. Increasing expression of a gene called Dicer-2, which uses the small RNA pathway to suppress transposons, added significantly to lifespan as well.

Finally, they showed that an anti-HIV drug called 3TC, which inhibits activation of transposons and their movement into new positions in the genome, can restore some lifespan to flies that have a mutation that disables Dicer-2.

For all the new results,  it's still not quite time to declare outright that transposons are a cause of aging's health effects.