Achalasia is a rare disease, affecting 1 in 100,000 people, characterized by a loss of nerve cells in the esophageal wall and manifested as chest pain during eating, weight loss, and regurgitation of food.

When we swallow, a sphincter in the lower esophagus opens, allowing food to enter the stomach. Nerve cells in the esophageal wall control the opening and closing of this sphincter, but in people with achalasia, these nerve cells gradually disappear. Without these cells, the esophageal sphincter fails to relax, causing food to accumulate in the esophagus. This results in the swallowing problems, regurgitation, vomiting, nighttime coughing, chest pain and weight loss. 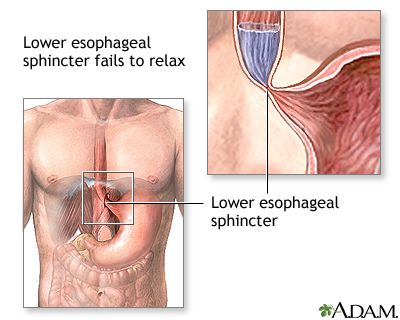 Because so little is known about achalasia, current treatments are limited to stretching the esophageal sphincter endoscopically with a balloon or surgically cutting the sphincter. But while these treatments can help alleviate the disease's symptoms, they do not address its cause.

While its cause remains unknown, a new study by a team of researchers has found that achalasia is autoimmune in origin.

Researchers have long suspected that an autoimmune response lies at the root of the disease, but an explanation for why the immune system of people with achalasia responds as it does remains elusive. One possible explanation is that esophageal nerve cells are targeted by the body's defenses due to a miscued immune response to an earlier viral infection – the immune system mistakes the nerve cells for the virus and attacks them.

Based on their results, the researchers think that genetics may play a more important role than previously thought in determining who is at risk for achalasia. Because the disease is so rare, cohorts in previous genetic studies have been too small (less than 300 patients) to draw significant conclusions.

Together with German colleagues, researchers at KU Leuven studied the DNA of 1,506 achalasia patients and 5,832 healthy volunteers from Central and Southern Europe. The study is the first systematic, genome-wide association study on achalasia and involves the largest cohort ever analyzed for the disease.

The researchers genotyped 196,524 single-nucleotide polymorphisms (SNPs) in the immune-related DNA of people with achalasia, and compared the results with the DNA of the healthy volunteers. 33 SNPs were found to be associated with achalasia.

All 33 were located in the so-called 'major histocompatibility complex' (MHC) region of chromosome 6, the most gene-dense region in the human genome. This region is also known to be associated with other autoimmune disorders, including multiple sclerosis, type 1 diabetes and lupus. This evidence was enough for the researchers to confirm that achalasia is itself an autoimmune disease.

The researchers also pinpointed a specific string of amino acids inserted in the DNA of people with achalasia but not in the controls. The string, 8-amino acids long, is located in the cytoplasmic tail of HLA DQβ1. Moving forward, the researchers will examine the functional effects of these extra amino acids – in the hope of finding the cause, and eventually the cure, of this enigmatic disease.