Erin Richards
If you suffer from occasional or frequent heartburn, you know who you are. You may avoid eating certain foods, keep an arsenal of antacids beside your bed, and still suffer from pain caused by renegade stomach acid wrecking havoc on your esophagus.

Someone who experiences frequent acid reflux, may have a faulty sphincter. This image shows the stomach acid in the lower part of the stomach, and when the lower esophageal sphincter is relaxed and open, it can allow stomach acid to leak out. This may be due to certain food stimuli, excess acid, or to relaxing sphincter muscles. Photo credit: UAB Health System

There are countless medicines to treat excess acid and acid reflux including antacids like Tums and Pepsid, which counteract the extra acid in the stomach with added base chemicals. There are also a whole class of medications which act as proton-pump inhibitors, which prevent the stomach from making more acid. Proton-pump inhibitors include medicines like Prevacid, and the newly FDA approved Kapidex, which are approved to treat excess acid and erosive esophagitis. Even though medications target the excess acid, a faulty esophageal sphincter can still allow leaks.

Looking at GERD treatment from a different angle, are researchers from Torax Medical Inc., a medical device design company. They have recently announced launch of a study to examine the safety and efficacy of their own minimally invasive LINX™ Reflux Management System, a small implant, on patients who suffer from GERD and are still experience symptoms despite anti-acid medications. 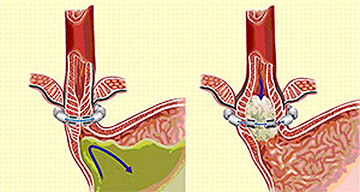 The LINX Reflux Management System is a band of magnetic beads placed outside the lower esophagus and helps to support the function of the esophageal sphincter. Proper function of this sphinter allows for normal digestion, and also prevents stomach acid from leaking into the esophagus. Photo credit: UCSD News

Torax’s new acid-reflux treatment is designed to target faulty sphincters that continue to allow acid to leak into the esophagus. Their study will implant the LINX Reflux Management System laparoscopically, through a small incision in the abdomen. The device is a band of magnetic beads which are placed around the lower esophagus. After placement, the magnetic attraction of the beads supports the esophageal sphincter to avoid acid leakage, but also is flexible enough to allow for normal digestion.

Robert Ganz, M.D. of Minnesota Gastroenterology and a Principal

Investigator in the trial said, "Many people who suffer from GERD do

not get complete relief of symptoms with drug therapy. The LINX System

is intriguing because it may provide both symptom relief and correction

of the physiologic defect."

Targeting faulty sphincters allows patients to be free of chronic acid reflux and without the side effects or long term consequences of anti-acid drug therapy and acid reflux.