News Staff
In the animal kingdom, predators use a full range of strategies, such as camouflage, speed and optical illusions, to catch their prey. Meanwhile, prey species resort to the same tactics to escape from their predators. Such tricks are also used at the molecular level, as discovered by researchers from the CNRS, INRA, CEA and INSERM in one of the most devastating bacterial plant pathogens in the world, which bypasses plant cell defenses by preventing an immune signaling from being triggered.

Even more surprising is the fact that plant cells have developed a receptor incorporating a decoy intended to catch the invader in its own trap.


As in humans, interception of pathogens by the immune system is essential for plants, allowing them to ensure their survival, growth and productivity. Their defense responses rely entirely on genetic resistance (innate immunity) conferred by a family of receptors expressed in individual cells. These receptors are inactive until they are activated following recognition of specific pathogenic molecules, called effectors, whose objective is often to block immune pathways.

The speed at which microbial pathogens can produce new effectors that promote infection puts considerable pressure on plants, forcing them to constantly acquire new detection capabilities. In this article, published in the journal Cell, the researchers describe a particularly ingenious defense mechanism in the model plant Arabidopsis. This mechanism enables the plant to convert the virulence activity of a bacterial effector into a trigger for a rapid immune response. 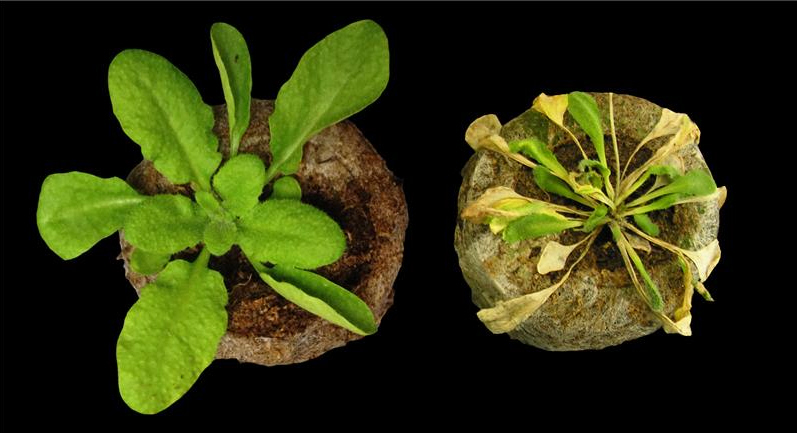 Arabidopsis plants inoculated via the roots with a strain of Ralstonia solanacearum producing effector PopP2.Right, a plant lacking the decoy receptor is unable to recognize the presence of the bacterium that thus succeeds in killing its host.Left, a plant with the decoy receptor is able to detect the presence of the PopP2 effector injected by the bacteria and thus to establish an immune response that blocks the invasion.© Laurent Deslandes - Laboratoire des interactions plantes micro-organismes (CNRS / INRA)

Ralstonia solanacearum, a bacterium responsible for bacterial wilt of many plant species, including tomato and tobacco, has developed a particularly effective invasion strategy. Among the many effectors that the bacterium injects into host cells to block the immune defenses is the protein PopP2, whose mode of action was brought to light in the present study. PopP2 was examined within the cell nucleus, where DNA regions are capped with proteins (transcription factors) responsible for regulating the expression of defense-related genes. Once inside the nucleus, PopP2 uses its enzymatic activity to inhibit the binding of some transcription factors in relation to their target sequences. Thus dislodged and neutralized, these proteins are unable to activate the defenses, allowing the invader to "clean-up".

From this discovery in Arabidopsis thaliana, which is one of the "preys" of the bacterium Ralstonia solanacearum, the researchers identified a defense mechanism just as radical as that deployed by the bacterium. Among the proteins that PopP2 interferes with, one was found to be a decoy directly integrated into an immune receptor. By attacking this decoy, PopP2 accidentally triggers the plant's alarm signal as this receptor, once separated from the DNA, becomes able to orchestrate the defense response.

The integration of a "decoy" into the studied receptor has a distinct advantage: such a "monitoring system" is difficult for the pathogen to overcome since it is the intrinsic activity of the effector that activates the immune response. Bypassing the usual process of evolution, in which each party improves its arsenal in turn, gives the plant cell the upper hand. As a result, even if PopP2 evolves but as long as its activity remains unchanged, it will inevitably activate the cell's defense mechanisms.

This molecular strategy of "integrated decoys" may be more widespread than it seems, which raises the question of whether the areas of unknown function in the immune receptors of many plant species could be related to decoys. This discovery is more than a step forward in the understanding of an original mechanism as it paves the way for the development of new immune receptors that could very efficiently intercept the virulence factors of the pathogens responsible for significant agricultural losses every year.