News Staff
The ocean is a huge reservoir of dissolved organic molecules, many of them stable against microbial utilization for hundreds and even thousands of years.  They contain a similar amount of carbon as compared to carbon dioxide (CO2) in the atmosphere and the origin of these persistent molecules has been something of an enigma.

Dissolved organic matter (DOM) in the ocean is a highly complex mixture of different carbon-based substances which are metabolic or excretory products from organisms or have formed through decomposition processes. A proportion of the DOM can be consumed by bacteria and re-mineralized to carbon dioxide. However, the majority of the DOM found in the ocean (more than 90 percent) is resistant to bacterial utilization and can be 4,000 to 6,000 years old on average. 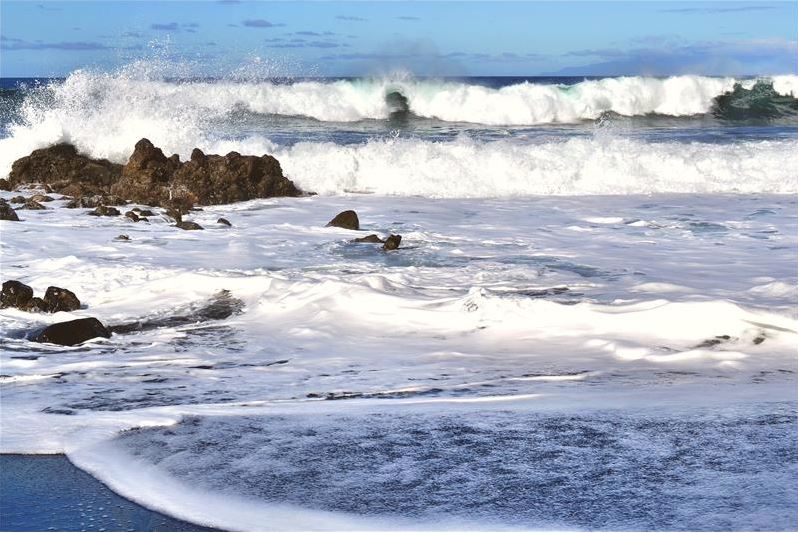 Algae and bacteria in the ocean have a great impact on the equilibrium between the drawdown and release of carbon dioxide (CO2) from the atmosphere and therefore on the global climate. Photo: Andreas Hermsdorf_pixelio.de

"Bacteria have an enormous repertoire of enzymatic mechanisms to break down organic material and use it as a source of energy," said Dr Oliver Lechtenfeld of the Helmholtz Centre for Environmental Research (UFZ), who carried out the study at the University of South Carolina. "It's remarkable that such a large reservoir of DOM seems to be resistant to breakdown in the ocean. And it raises the question: where does this persistent DOM actually come from?"

Studies have shown that bacteria in laboratory experiments produce DOM that can be stable for over a year. Lechtenfeld: "We wanted to find out whether the DOM produced by bacteria in the laboratory is chemically comparable with the persistent DOM that occurs naturally".

For their study, the researchers placed bacteria from the sea in artificial sea water, in order to ensure that the water was DOM-free at the beginning of the experiment. The bacteria were fed using known carbon sources.

"By doing this, we knew that the DOM measured in the incubations was produced by the bacteria," explained Lechtenfeld.

After four weeks the DOM produced by bacteria was analyzed using high-resolution chemical methods (nuclear magnetic resonance spectroscopy and ultra high-resolution mass spectrometry) and compared with the DOM found naturally in sea water. "Our study reveals that bacteria rapidly produced complex DOM that was similar in it's chemical composition to natural DOM. The results were surprising and indicate that bacterial metabolites are a source of the persistent molecules in the ocean," said Dr Ronald Benner from the University of South Carolina.

As a consequence, the researchers got an answer to their question as to the origin of persistent DOM: "It seems very clear that bacteria are a major driver in keeping a fraction of the atmospheric carbon dioxide in the ocean for long periods of time," said Dr Norbert Hertkorn of the Helmholtz Centre Munich. "Although the percentage of persistent substances in our experiment was apparently very low, their stability suggests that they may accumulate in the ocean. This is how bacteria efficiently contribute to carbon storage in the ocean and play an important and so far underestimated role for our climate."

Lechtenfeld wants to carry out further investigations to find out which chemical structures and mechanisms are responsible for bacteria being unable to break down persistent substances. In doing so he will extend his focus to include the soil ecosystem: "Even less is known about which processes in the soil are responsible for capturing carbon in the form of persistent organic molecules. That is, however, an important aspect for agriculture and for the treatment of drinking water. As for some years, there have been increased DOM concentrations measured in catchment areas of water dams," said Lechtenfeld. "How climate change with rising average temperatures and changing precipitation patterns is going to affect the composition of bacterial communities in the sea and in soil and their ability to store carbon, requires further research efforts."