That's not the case in the North Pacific, say Phoebe Lam and James Bishop of the Earth Sciences Division at the Department of Energy's Lawrence Berkeley National Laboratory

They report that the key source of iron in the Western North Pacific is not dust but the volcanic continental margins of the Kamchatka Peninsula and the Kuril Islands. 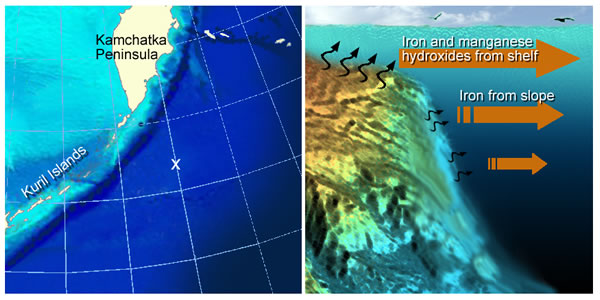 From a site at 47 degrees north latitude and 160 degrees east longitude in the Western North Pacific (marked X), iron and manganese found at depths of 100-200 meters originated hundreds of miles away, from the continental shelves of the Kamchatka Peninsula and Kuril Islands. Particulate and dissolved iron and manganese hydroxides came from the upper shelf, and, after further processing, more iron (now poor in manganese) came from deeper on the slopes.

Understanding the origins, transport mechanisms, and fate of naturally occurring iron in high-nutrient, low-chlorophyll surface waters is important in calculating climate change. For example, artificial iron-fertilization schemes, although based on inadequately tested assumptions, hope to reduce greenhouse gases by stimulating plankton blooms to suck carbon dioxide from the atmosphere and store it in the oceans.

It's iron that enables phytoplankton to use nitrate; without it the plants are denied access to often substantial nitrogen sources in HNLC regions, of which the Subarctic North Pacific is one of three major such regions in the world.

"In the open ocean, the biopump wants to grab all the iron it can," says Bishop. "There were two recognized natural sources of iron out there, atmospheric dust and upwelling from below. Where we've looked in the North Pacific, we're seeing a new and important third source, the continental margins. The rules for the role of iron in the ocean carbon cycle need to be revised."

The wind-blown-dust theory of iron fertilization had no direct evidentiary support until Jim Bishop himself made the first observation of dust in action. In the spring of 2001, two robotic Carbon Explorer floats recorded the rapid growth of phytoplankton in the upper layers of the North Pacific Ocean after a passing storm had deposited iron-rich dust from the Gobi Desert. The Carbon Explorers had been designed by Bishop with colleagues at the Scripps Institution of Oceanography; their measurements, radioed back to him by satellite, marked the first time wind-blown terrestrial dust had been recorded fertilizing the growth of aquatic plant life.

"But the plankton blooms the two Carbon Explorers saw lasted only two weeks," Bishop says, "which raised questions about how important this transport mechanism really is."

Further doubts arose when, beginning in 2001, Lam analyzed samples that Bishop had collected five years earlier well out in the Eastern North Pacific. In February, 1996, a rare break in the winter weather had allowed Bishop to deploy a Multiple Unit Large Volume Filtration System (MULVFS), an array of collectors lowered over the side of the research vessel by cable. What MULVFS brought back were samples that contained iron plus evidence of a vigorous plankton bloom -- in the middle of the Eastern Subarctic Pacific, in the cold, dark days of midwinter.

There was no evidence dust storms could have carried terrestrial iron to the North Pacific that February, nor was the chemistry of the iron in the samples characteristic of iron from upwelling or past deposited dust. As the source of the iron, only the continental margins were logical.

Lam and Bishop and their colleagues published their studies in 2006, concluding that the iron had indeed come from the continental margins of the Aleutian Islands, 900 kilometers to the northwest of the site where the midwinter plankton bloom had been found. Iron particles and soluble iron had been carried there along a layer of denser water roughly 100 to 150 meters deep (the pycnocline), and the iron had been stirred up by storms that made it available to near-surface plankton in the dead of winter.

Lam and Bishop's recent studies of iron in the North Pacific HNLC region were focused on a region thousands of kilometers farther west. They used samples they collected with MULVFS in the late summer of 2005, during a VERTIGO project cruise led by scientists at the Woods Hole Oceanographic Institution (VERTIGO stands for Vertical Transport in the Global Ocean). The cruise concentrated on a site in the Western Subarctic Pacific that was hundreds of kilometers south of the Kamchatka Peninsula and east of the Kuril Islands.

Like other HNLC regions, this area has low biomass compared to what might be expected for such nutrient-rich waters, although it does have higher biological productivity than the Eastern Subarctic Pacific. It also has higher iron concentrations, traditionally explained by its proximity to sources of Asian dust storms, which deposit three times as much dust in these waters as in the Eastern North Pacific.

Iron from the Ring of Fire

Lam and Bishop again found particulate iron beneath the surface, and again the concentrations peaked at depths between 100 and 200 meters. But these concentrations were six times greater than those they had found in the Eastern Subarctic Pacific. The chemistry was a giveaway: the iron was "reduced," that is, having less oxygen than oxidized samples from the surface of the Earth (oxidized iron is better known as rust). Like material brought up from Earth's mantle, many of these iron-rich samples had not been weathered; in fact they were characteristic of basalts found in the continental shelves of the Kurils and Kamchatka, part of the Pacific's volcanic Ring of Fire.

Iron must be dissolved to be accessible to phytoplankton, and the reduced iron in volcanic silicates from island-arc sediments may dissolve more readily than iron in dust. As in the Eastern Subarctic Pacific, the particulate iron Lam and Bishop found in the Western Subarctic Pacific -- and by inference the dissolved iron essential to plankton growth -- was concentrated at depths indicating it had traveled from the ocean edges along the pycnocline. Upwelling or vertical mixing would make concentrations of continental iron at these depths readily available to plankton.

Conservative estimates of bioavailable iron (iron that can fertilize plankton) from both wind-blown dust and continental sources led Lam and Bishop to conclude that a minimum of 55 percent of the bioavailable iron they found at this site -- and probably much more -- comes from the nearby volcanic continental margins.

Says Lam, "It takes only a simple calculation to show that iron delivered from the continental shelf, under the surface, is at least as important here as iron from airborne dust. And we suspect this is the case for the iron supply in other, similar regions of the oceans." 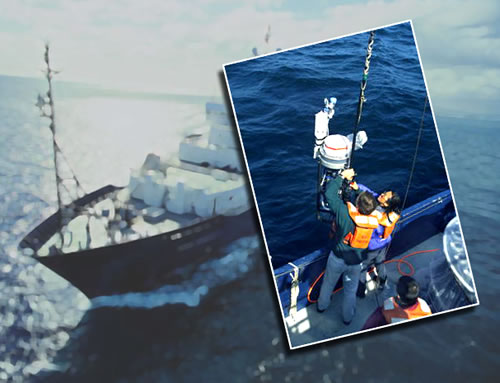 Aboard the R/V Roger Revelle in the Western Subarctic Pacific, Jim Bishop and Phoebe Lam collected seawater containing iron with MULVFS, a system that can simultaneously take samples from a dozen intervals down to a kilometer deep.

Lam and Bishop's findings have implications far beyond correcting estimates of the iron budget in HNLCs.

"Just looking at a map and considering the history of geochemical processes like volcanism and their influence on the biology of the oceans -- and what's already happening as the climate gets warmer, the glaciers melt, and the edges of the continents are altered drastically -- it's clear how little we understand how these changes are likely to affect the productivity of the ocean and its ability to store atmospheric carbon," Bishop says. "Before we start playing around with massive-scale, commercial iron fertilization, we have a lot of science yet to do. Natural iron, and associated elements, seem to cause a significantly different biological response than has been seen in the dozen fertilization experiment to date. It would be good to know why."

This research was funded by the U.S. Department of Energy's Office of Science, Biological and Environmental Research Program, and by the Woods Hole Oceanographic Institution, the Richard B. Sellars Endowed Research Fund, and the Andrew W. Mellon Foundation. Portions of the work were carried out at DOE's Advanced Light Source at Berkeley Lab and DOE's Stanford Synchrotron Radiation Laboratory.