A new battery-less cardiac pacemaker is based on the automatic wristwatch concept - it is powered by heart motion.

The prototype device  presented at ESC Congress 2014 by Adrian Zurbuchen from Switzerland does not require battery replacement.

Zurbuchen is a PhD candidate in the Cardiovascular Engineering Group at ARTORG, University of Bern and said, "Batteries are a limiting factor in today's medical implants. Once they reach a critically low energy level, physicians see themselves forced to replace a correctly functioning medical device in a surgical intervention. This is an unpleasant scenario which increases costs and the risk of complications for patients.

"The heart seems to be a very promising energy source because its contractions are repetitive and present for 24 hours a day, 7 days a week. Furthermore the automatic clockwork, invented in the year 1777, has a good reputation as a reliable technology to scavenge energy from motion." 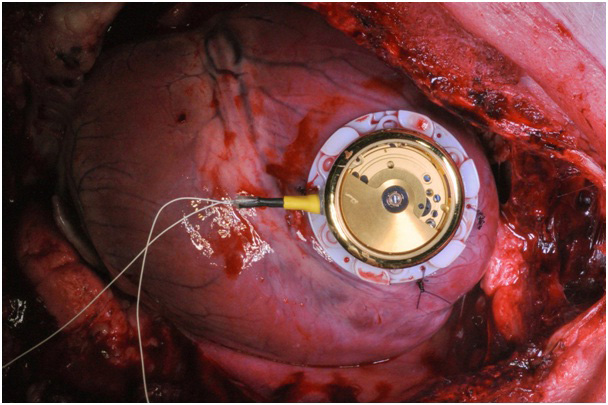 The energy harvesting device is sutured directly onto the myocardium. Credit: ESC

The researchers' first prototype is based on a commercially available automatic wristwatch. All unnecessary parts were removed to reduce weight and size. In addition, they developed a custom-made housing with eyelets that allows suturing the device directly onto the myocardium .

The prototype works the same way it would on a person's wrist. When it is exposed to an external acceleration, the eccentric mass of the clockwork starts rotating. This rotation progressively winds a mechanical spring. After the spring is fully charged it unwinds and thereby spins an electrical micro-generator.

To test the prototype, the researchers developed an electronic circuit to transform and store the signal into a small buffer capacity. They then connected the system to a custom-made cardiac pacemaker (photo 2). The system worked in three steps. First, the harvesting prototype acquired energy from the heart. Second, the energy was temporarily stored in the buffer capacity. And finally, the buffered energy was used by the pacemaker to apply minute stimuli to the heart. 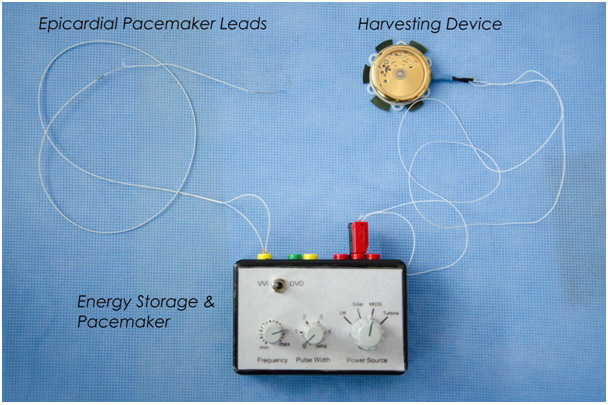 The batteryless pacemaker was tested by connecting the energy harvesting device to an electronic circuit that transformed and stored the signal into a small buffer capacity. The buffered energy was used to power a custom-made cardiac pacemaker. Electrical stimuli were delivered to the heart by epicardial leads. Credit:ESC

The researchers successfully tested the system in in vivo experiments with domestic pigs. The newly developed system allowed them for the first time to perform batteryless overdrive-pacing at 130 beats per minute.

Zurbuchen said: "We have shown that it is possible to pace the heart using the power of its own motion. The next step in our prototype is to integrate both the electronic circuit for energy storage and the custom-made pacemaker directly into the harvesting device. This will eliminate the need for leads."

He concluded: "Our new pacemaker tackles the two major disadvantages of today's pacemakers. First, pacemaker leads are prone to fracture and can pose an imminent threat to the patient. And second, the lifetime of a pacemaker battery is limited. Our energy harvesting system is located directly on the heart and has the potential to avoid both disadvantages by providing the world with a batteryless and leadless pacemaker."