Divorce rates have gone down; the oft-cited 1970s statistic that 'half of all marriages end in divorce' was never really correct, but the belief that it was made divorce much more common.

More young people today are also avoiding divorce by avoiding marriage. As a result, more than half of all American children will have an unmarried mother - and regardless of all of the cultural whitewashing and rationalizations that cultural apologists engage in, the absence of a biological father increases the likelihood that a child will exhibit antisocial behaviors like aggression, rule-breaking and delinquency. Young boys in that environment are 40 percent less likely to finish high school or attend college, regardless of race.

Writing in EducationNext,  scholars Sara McLanahan of Princeton's Woodrow Wilson School of Public and International Affairs and Christopher Jencks of Harvard wrote their paper to coincide with the 50th anniversary of the controversial "Moynihan Report," a 1965 study by sociologist (and later incredibly respected New York Senator) Daniel Patrick Moynihan, that argued that growing up in homes without a male breadwinner led to a life of poverty, unemployment and crime, especially for African Americans.

Imagine if someone said that today. Cultural militants are determined to launch their Internet Superweapons if an ESA engineer wears an ugly shirt on television, no academic could argue that children do better with a father around and keep their job. 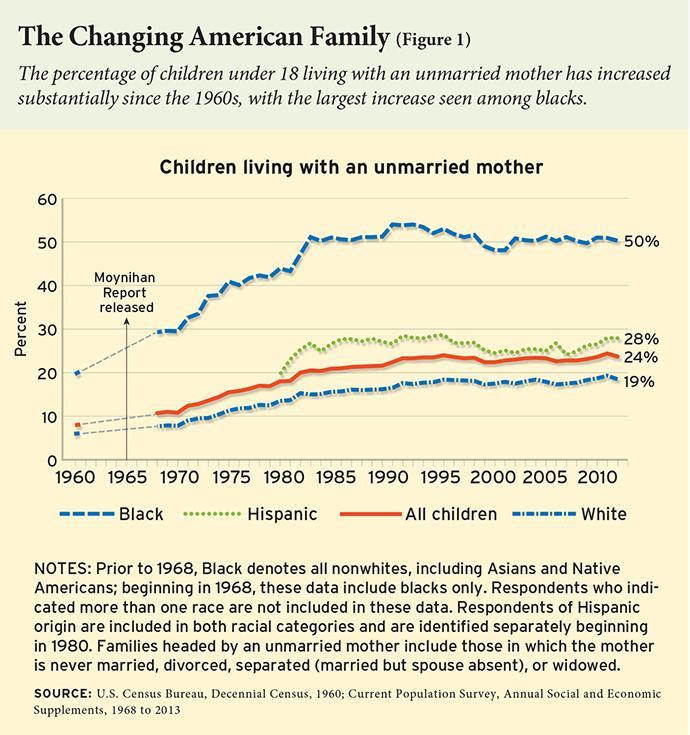 The percentage of children under age 18 living with an unmarried mother has increased substantially since the 1960s, with the largest increase seen among blacks. Credit: EducationNext

McLanahan and Jencks examine the trends since Moynihan's report was denounced in the 1960s.

The researchers found that since 1965, the percentage of children raised by unmarried mothers has risen from 25 to 50 percent among blacks, and 7 to 19 percent among whites. ("Unmarried" mothers are defined only by marital status, not whether the mother lives with a partner.)

However, the racial makeup of single-mother families has not changed much over time. In 1970, 31 percent of single-mother families were black, 68 percent were white and 1 percent were "other race." In 2013, the figures were 30 percent black, 62 percent white and 8 percent "other." Evidence on the impact of these trends comes from the Fragile Families and Child Wellbeing study, pioneered by McLanahan, which is following a cohort of nearly 5,000 children born in large American cities between 1998 and 2000.

In the past five decades, the meaning of single motherhood has changed dramatically, McLanahan and Jencks write. Single mothers today are far less likely than their predecessors to have ever been married. Now, single motherhood usually occurs earlier in a child's life, or even at the very beginning. It is not uncommon for women to be single when their first child is born. Also, the high rate of partner turnover during a mother's peak fertility years means that children now experience multiple men entering and exiting their lives.

"Both the departure of a father and the arrival of a mother's new partner disrupt family routines and are stressful for most children, regardless of whether the father was married to the mother or just living with her," said McLanahan, director of the Bendheim-Thoman Center for Research on Child Wellbeing at Princeton's Woodrow Wilson School of Public and International Affairs. "Likewise, this shift to never-married motherhood has probably weakened the economic and emotional ties between children and their absent fathers."

Another change is that unmarried motherhood has spread fastest among mothers who have not completed college. For blacks, the number of children living with a mother who lacks a high school diploma has increased from 56 percent in 1980 to 66 percent in 2010. For whites, the percentage of children whose mothers lack a high school degree has remained essentially unchanged, hovering at around 18 percent between 1980 and 2010.

The official poverty rate in 2013 among all families with children was 40 percent if the family was headed by an unmarried mother and only 8 percent if the family was headed by a married couple. Among blacks, the rates were 46 percent in single-mother families and 12 percent in married-parent families. Among Hispanics, the figures were 47 percent and 18 percent, and among whites the rates were 32 percent and 4 percent, respectively. The percentage of births to unmarried mothers is twice as high for blacks as for whites, and across all groups the rate has increased over the last 50 years. Credit:  EducationNext

"The fact that single motherhood is increasing faster among women with less than a college degree means that children growing up with a single mother are likely to be doubly disadvantaged," said McLanahan. "They spend less time and receive less money from their biological fathers than children who live with their fathers. At the same time, the mother - who is now the primary breadwinner - has lower earnings than the typical mother in a married-parent family." The percentage of children under 18 living with a single mother is highest among black children whose mothers do not have a high school diploma. Credit:  EducationNext

Changing the current dynamic will be difficult, the authors write. It would require giving less-educated women incentives to invest in education and careers and to use more reliable contraceptive methods, McLanahan and Jencks said. At the same time, the economic prospects of the young men who father the children also must improve.

Article: "Was Moynihan right? What happens to the children of unmarried mothers," Dec. 9 in EducationNext.