News Staff
In cultural perception, an artificial hand looks something like a Steampunk reworking of a hand, with gears and pistons and rods. In the future, an artificial hand would look just like a hand, except with muscles made from smart metal wires.

Engineers at Saarland University have equipped an artificial hand with muscles made from  nickel-titanium shape-memory wire, enabling the fabrication of flexible and lightweight robot hands for industrial applications and novel prosthetic devices. The muscle fibers are composed of bundles of the ultra-fine nickel-titanium alloy wires, each about the width of a human hair, and they are able to tense and flex and the material has sensory properties allowing the artificial hand to perform extremely precise movements. 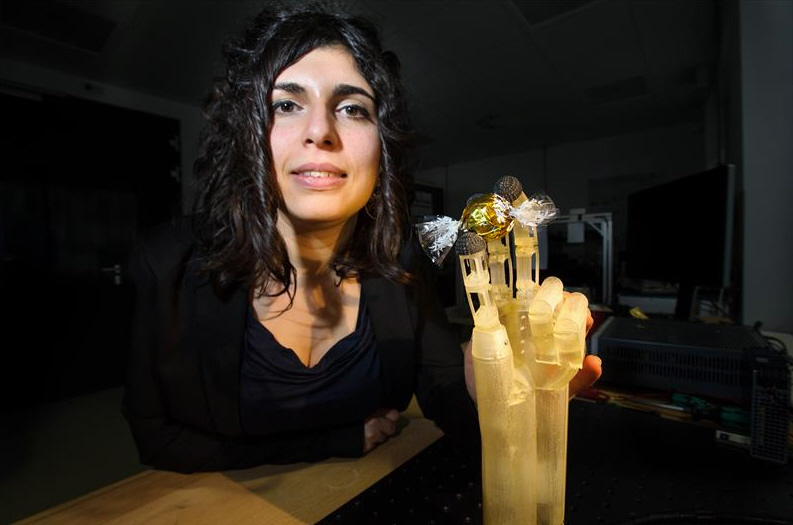 Filomena Simone with a prototype of the artificial hand. Foto/Credit: Oliver Dietze

Shape-memory alloy (SMA) wires offer significant advantages over other techniques, says Professor Stefan Seelecke from Saarland University and the Center for Mechatronics and Automation Technology. Artificial hands such as those used in industrial production lines have relied on a lot of complex background technology. As a result they are dependent on other devices and equipment, such as electric motors or pneumatics, and they tend to be heavy, relatively inflexible, and expensive. "In contrast, tools fabricated with artificial muscles from SMA wire can do without additional equipment, making them light, flexible and highly adaptable. They operate silently and are relatively cheap to produce. And these wires have the highest energy density of all known drive mechanisms, which enables them to perform powerful movements in restricted spaces."

The term ‘shape memory’ refers to the fact that the wire is able to ‘remember’ its shape and to return to that original predetermined shape after it has been deformed. "This property of nickel-titanium alloy is a result of phase changes that occur within the material. If the wire becomes warm, which happens, for instance, when it conducts electricity, the material transforms its lattice structure causing it to contract like a muscle," says Seelecke.

The engineers use ‘smart’ wires to play the role of muscles in the artificial hand. Multiple strands of shape-memory wire connect the finger joints and act as flexor muscles on the front-side of the finger and as extensor muscles on the rear. In order to facilitate rapid movements, the engineers copied the structure of natural human muscles by grouping the very fine wires into bundles to mimic muscle fibres. These bundles of wires are as fine as a thread of cotton, but have the tensile strength of a thick wire. "The bundle can rapidly contract and relax while exerting a high tensile force," explains Filomena Simone, an engineer who is working on the prototype of the artificial hand as part of her doctoral research. "The reason for this behaviour is the rapid cooling that is possible because lots of individual wires present a greater surface area through which heat can be dissipated. Unlike a single thick wire, a bundle of very fine wires can undergo rapid contractions and extensions equivalent to those observed in human muscles. As a result, we are able to achieve fast and smooth finger movements"

Another effect of using the shape-memory metal wires is that the hand can respond in a natural manner when someone intervenes while a particular movement is being carried out. This means that humans can literally work hand-in-hand with the prototype device. A semiconductor chip controls the relative motions of the SMA wires allowing precise movements to be carried out. And the system does not need sensors.

"The material from which wires are made has sensor properties. The controller unit is able to interpret electric resistance measurement data so that it knows the exact position of the wires at any one time," says Seelecke. This enables the hand and the fingers to be moved with high precision.

The research team will be exhibiting their system prototypes at HANNOVER MESSE 2015 from April 13th to April 17th. The team, who will be exhibiting at the Saarland Research and Innovation Stand in Hall 2, Stand B 46.
News Articles
More Articles All Articles
About