News Staff
Though gluten sensitivity can be claimed by anyone embracing a popular food fad, celiac disease must be diagnosed, and that requires a tissue sample from the small intestine, which can be extremely unpleasant.

But it's important because in celiac disease the immune system regards gluten as a virus or bacteria, which causes the body to trigger an unnecessary inflammatory reaction in the small intestine - an autoimmune reaction. When the food that you eat enters the small intestine, it is reduced to tiny fractions and presented to the T cells on HLA molecules. The HLA molecules present various elements of what you consume, as well as what is inside the cells.

The task of the T cells is to monitor cells to see if they are infected by viruses or bacteria.
In the case of celiac disease, the T cells think that gluten is a virus or bacteria. Tissue and enzymes are attacked, the villi become damaged and the patient can suffer weight loss, reduced absorption of nutrients and stomach pains.

Diagnosis also has some pain. It requires a tissue sample from the small intestine while consuming gluten-containing foods, which may result in pain and considerable discomfort, and the tissue samples are taken by gastroscopy, which means a tube being inserted down through your throat to the duodenum. The tissue samples must also be taken in order to obtain a definite diagnosis. 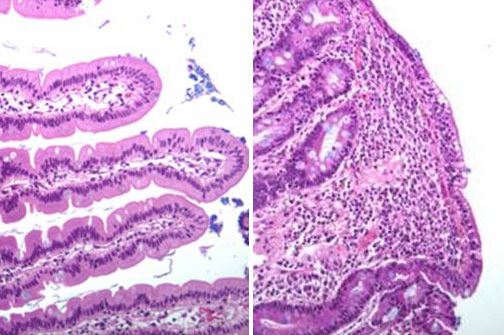 A new blood test instead provides a rapid, painless alternative. If the test is approved and released on the market, a blood test and a reagent composed of HLA molecules and fractions of gluten added to the sample will make the determination. A reagent is a substance to which something is added to detect the presence of another substance. In this case the reagent binds itself to the T cells that are in the blood sample. Magnetized antibodies are also added which in turn bind to the reagent.

“When we allow blood cells to flow through a magnetic column, the cells that react to gluten remain suspended in the column while all the other cells flow through it. We observe that coeliacs have a much higher number of gluten-reactive T cells in their blood than non-celiacs. The level is more or less independent of how much gluten they eat,” says Asbjørn Christophersen, post-doctoral researcher at University of Oslo Faculty of Medicine.

This means that we can diagnose celiac disease irrespective of whether you are consuming foods containing gluten or not. You can thereby avoid the discomfort that may result from the intake of gluten, not to mention that you avoid the gastroscopy. Diagnosis becomes more effective as well as less unpleasant for the patient.

The researchers are now conducting a large-scale clinical trial with three groups: celiacs, healthy individuals and persons with symptoms similar to celiac disease.
News Articles
More Articles All Articles
About