News Staff
In a complex system like the human body, it's no surprise things can sometimes go wrong in development but evolution has made the system rather forgiving. When children inherit chromosomes from their parents, some minor genetic changes frequently occur without consequence but chromothripsis - chromosomal shattering - has been linked to severly affected children of healthy mothers in a small study.

The researchers studied three families whose children suffer from multiple abnormalities due to chromothripsis that they inherited from their mothers. Although the children's mothers were unaffected or only mildly affected, the women's genomes harbored even more genome breakage than their children's. Two of the mothers had experienced prior difficulties with getting pregnant, which was probably associated with their complex genomic rearrangements.

The results certainly highlight the amazing ability of the human genome to tolerate gene disruption but also indicate that chromothripsis can impact female reproduction and should be considered during counseling of couples dealing with infertility. 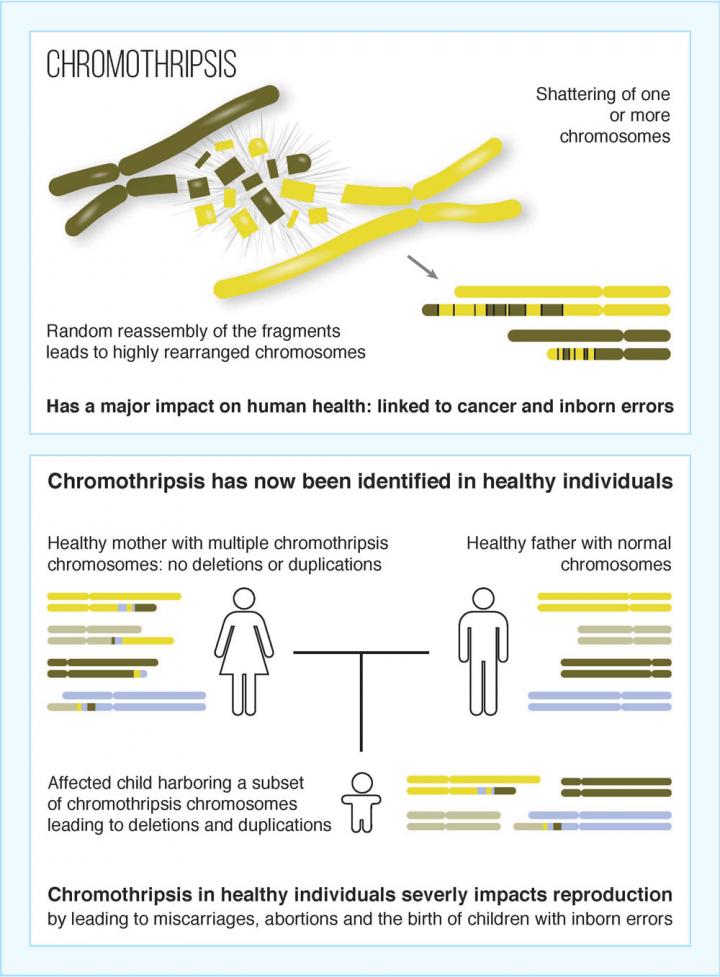 "Our study shows that despite its dramatic effects on chromosomal architecture, chromothripsis--which involves shattering of one or multiple chromosomes followed by random reassembly--does not necessarily lead to disease," says senior author Wigard Kloosterman, PhD, of University Medical Center Utrecht, in The Netherlands. "However, the presence of this phenomenon in healthy individuals impacts reproduction by leading to difficulties getting pregnant, miscarriages, and the birth of children with multiple birth defects, including intellectual disability."

Kloosterman noted that it is difficult to estimate the frequency of chromothripsis in the general population, and many of the commonly used analytical techniques lack the resolution to detect it to its full extent. The chromothripsis in the three mothers in this study was balanced, meaning that there were no deletions or duplications (changes in the number of copies of a gene) of any of the genes that were rearranged. Two children inherited only a subset, rather than all, chromothripsis chromosomes from their mother. In the third family, an additional rearrangement occurred during chromosome transfer to the child. In all three children, the alterations resulted in deletions and duplications of chromosomal regions, which most likely explains the children's birth defects.

"If one would solely perform currently widely used array-based diagnostic tests for detecting the number of copies of a gene in these families, one would only detect the genomic defects in the children but fail to detect the changes in the mother," said Kloosterman. "This would lead to a substantial underestimation of the recurrence risk for future pregnancies." Therefore, it is important to use a combination of genetic screening techniques, preferably whole-genome sequencing, in certain cases.