Highly-paid environmental lobbyists invoke Frankenstein's monster for everything, apparently never having read the novel. But there is some biology that is a little like Shelley's monster, massive DNA molecules stitched together from other parts of the genome  that appear in some tumors, according to a new study.

Writing in Cancer Cell, the authors say their finding solves a decades-old mystery and explains how these tumors ensure their own survival. The discovery also identified a potential drug target for treating cancers that are well known to harbor these molecules, dubbed 'neochromosomes' - giant, extra chromosomes found in up to 3 percent of all cancers, most commonly in liposarcomas (tumors of fat tissue), sarcomas (soft tissue tumors) and some brain and blood cancers.

Chromosomes are the packages of genetic information found in all cells of the body. Each normal cell has 23 pairs. Neochromosomes were first identified in the 1950s, but their development was a mystery until now. They are large, often many times the size of the largest normal chromosome, and harbor many extra copies of 'oncogenes'; altered genes known to drive cancer development.

The researchers found that spontaneous and catastrophic chromosomal 'explosions' trigger formation of neochromosomes. The shattered relics reassemble haphazardly, followed by a genetic frenzy of amplification and deletion. Genes known to be important for cancer development are massively amplified, assuring the cancer's survival. 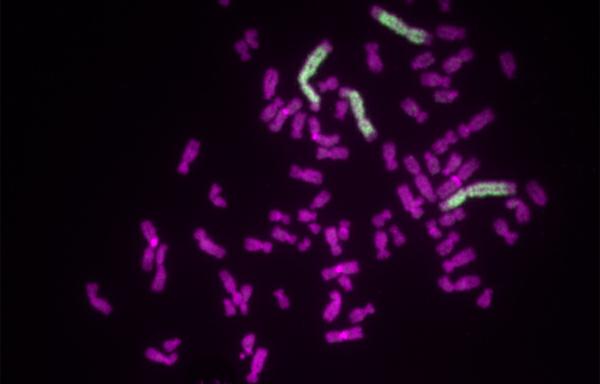 The researchers, led by Professor David Thomas and Associate Professor Tony Papenfuss, mapped the neochromosomes from liposarcomas, using next-generation DNA sequencing. The team then used mathematical modeling to reconstruct the sequence of events that caused the neochromosome to form, deducing that only chromosomal shattering could be to blame.

Associate Professor Papenfuss, from the Walter and Eliza Hall Institute and Peter MacCallum Cancer Centre, said the research was like archeology, sifting through the ruins of a past catastrophic event to understand the present.

"We showed that chromosome 12 shatters and its remnants form a ring of DNA in a haphazard fashion," he said. "As cells divide, and the circular chromosomes get copied and pulled into different cells, a constant abnormal morphing takes place. Small circles gradually become giant circles, progressively amplifying certain genes in what appears to be a selective process. The growing giant also sucks in DNA from all parts of the genome. At a certain point, the circle stops growing and becomes linear. By the time we look at tumor cells through the microscope, we see giant linear chromosomes."

Professor Thomas, Director of The Kinghorn Cancer Centre at the Garvan Institute, said the extent of the genetic rearrangement was truly astonishing. "These cancers manipulate the normal replication process in an ingenious way, creating a monster that can selectively steal and amplify the genes it needs to grow and survive," he said. "In some liposarcoma cell lines, DNA from every chromosome in the cell was found in the neochromosome, with between 60 and 100 copies of key oncogenes. Patient tumors also exhibited similar gene rearrangement."

The study also identified a potential therapeutic target to explore for treating liposarcomas, Professor Thomas said. "When the key oncogenes that were massively amplified in the cancer cells were blocked, the cancer cells died," he said.