Cloying Or Clever? Coffee That Only Brews When The Energy Is Renewable
By News Staff | November 4th 2014 10:06 PM | Print | E-mail

News Staff
Like coffee but your liberal guilt won't let you enjoy it if the energy to heat the water might have come from natural gas or nuclear energy?

There may be hope for the future. Researchers at Lancaster University have used a Raspberry Pi to determine the optimum time for a cup of tea in terms of impact on the environment - it only allows a kettle to boil when the University’s wind turbine is producing electricity. Windy Brew is the brainchild of Dr. Will Simm, Dr. Peter Newman, Dr. Maria Angela Ferrario and Dr. Stephen Forshaw.

It envisions a future where man does not reshape nature, but where we are hostage to it. 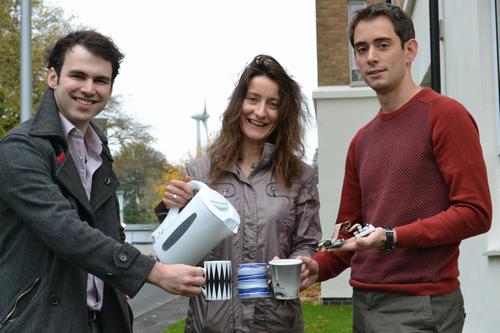 “Windy Brew has been inspired by a possible vision of the future where we can’t just use energy whenever and wherever we like, but have to synchronize our consumption to the availability of renewable energy sources rather than burning fossil fuels,” explains Simm. “We thought about the tasks that we do here in the office and we do like our brews. What if were able to sync the times we make our brew with our renewable energy sources? Would it allow us to develop a sensitivity for renewable energy, which is not always available?"

The University’s Information Systems Services unit provided a live feed of data from the turbine direct to the research team giving a second by second report of energy outputs. When the University turbine is generating power, the Raspberry Pi activates the radio controlled plug socket which, in turn, switches on the kettle and sends a tweet when it boils – the perfect ‘green’ brew, unless you count the materials for the Pi, the kettle, the wind vanes, the cups, the radio controlled plug socket, and shipping the tea from 8,000 miles away.

“This equipment, unlike others, is not about sourcing a cost effective energy supply,” said Dr Peter Newman. “It’s not about reducing energy consumption but it is about using energy more intelligently when it is more renewable. Reduced costs are a bi-product benefit.”

The team have also worked on producing a night-time mobile phone charger using the same technology but which, if the turbine has also been dormant, kicks in to power-up the phone an hour before rise and shine time.

“What we want to do now is look at more things on campus and see what we can add,” said  Newman. Future plans may well include a similar test drive project at the University’s laundry.

Windy Brew is one of a series of prototypes developed as part of the OnSupply project, which focuses on the remote island of Tiree, the outermost of the Scottish Inner Hebrides, where the team work with the community to uncover the role of renewables and to support a community in making the best use of their renewable energy when it is available. On Supply is part of the Catalyst Project, a community-led research initiative aimed at next generation digital technologies for social innovation and funded by the Engineering and Physical Sciences Research Council.
News Articles
More Articles All Articles
About