That's still a bit of a mystery. Despite the name, it has nothing to do with comets. In 1976, several elongated comet-like objects were discovered in pictures taken with the UK Schmidt Telescope in Australia. Because of their appearance, and despite any connection with comets, they became known as cometary globules. They were all located in a huge patch of glowing gas called the Gum Nebula. They had dense, dark, dusty heads and long, faint tails, which were generally pointing away from the Vela supernova remnant located at the center of the Gum Nebula. Although these objects are relatively close by, it took astronomers a long time to find them as they glow very dimly and are therefore hard to detect.

The cometary globule shown in this new picture, CG4, is also referred to as God’s Hand and is located about 1300 light-years from Earth in the constellation of Puppis ( also called The Poop, or Stern). 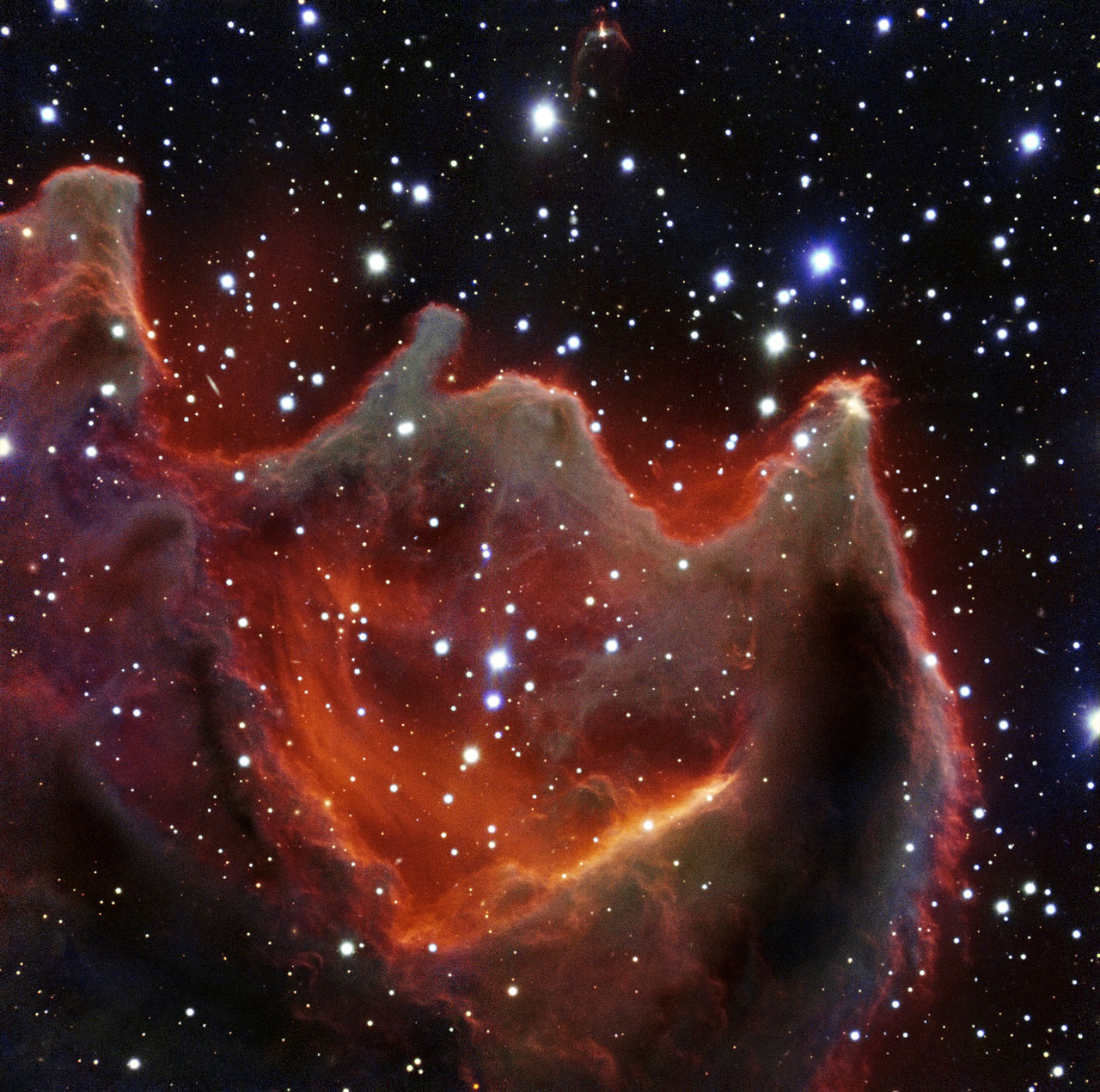 God's Hand? More like the Mouth Of The Beast, at least in this image from ESO’s Very Large Telescope. Although it looks huge and bright in this image it is actually a faint nebula and not easy to observe. Credit: ESO

The head of CG4, which is the part visible on this image and resembles the head of the gigantic beast, has a diameter of 1.5 light-years. The tail of the globule — which extends downwards and is not visible in the image — is about eight light-years long. By astronomical standards this makes it a comparatively small cloud.

The head part of CG4 is a thick cloud of gas and dust, which is only visible because it is illuminated by the light from nearby stars. The radiation emitted by these stars is gradually destroying the head of the globule and eroding away the tiny particles that scatter the starlight. However, the dusty cloud of CG4 still contains enough gas to make several Sun-sized stars and indeed, CG4 is actively forming new stars, perhaps triggered as radiation from the stars powering the Gum Nebula reached CG4. 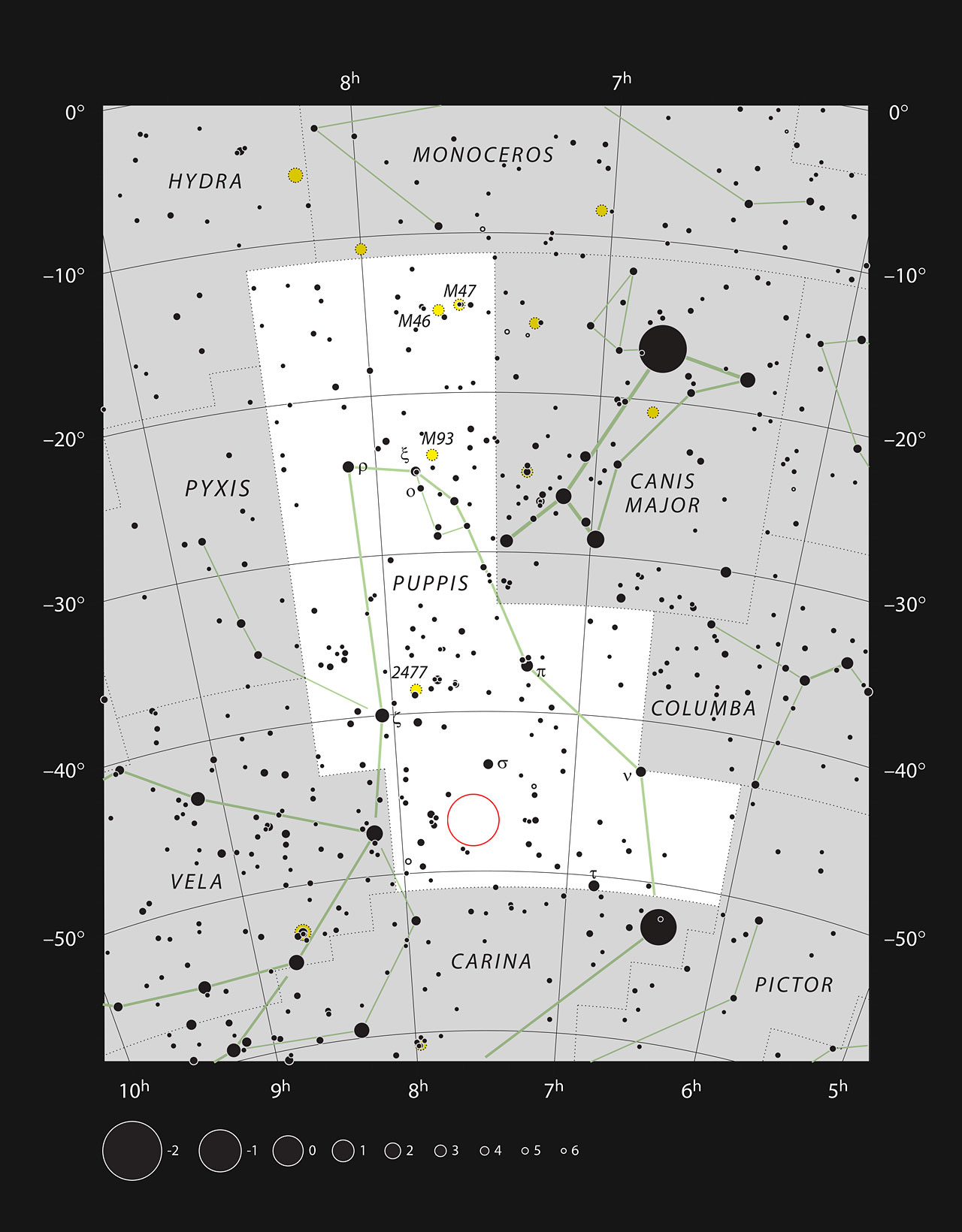 This chart of the southern constellation of Puppis (The Poop, part of the mythological ship Argo) shows most of the stars visible with the naked eye on a dark and clear night. The position of the strange cometary globule CG4 is marked, although this object is too faint to be seen visually and evaded detection by astronomers until the twentieth century. Credit: ESO, IAU and Sky&Telescope

Why CG4 and other cometary globules have their distinct form is still a matter of debate among astronomers and two theories have developed. Cometary globules, and therefore also CG4, could originally have been spherical nebulae, which were disrupted and acquired their new, unusual form because of the effects of a nearby supernova explosion. Other astronomers suggest, that cometary globules are shaped by stellar winds and ionising radiation from hot, massive OB stars. These effects could first lead to the bizarrely (but appropriately!) named formations known as elephant trunks and then eventually cometary globules.

To find out more, astronomers need to find out the mass, density, temperature, and velocities of the material in the globules. These can be determined by the measurements of molecular spectral lines which are most easily accessible at millimetre wavelengths — wavelengths at which telescopes like the Atacama Large Millimeter/submillimeter Array (ALMA) operate.
News Articles
More Articles All Articles
About