Two new species of sea-dwelling, mushroom-shaped organisms have been discovered.

Scientists classify organisms based on shared characteristics using a taxonomic rank, including kingdom, phylum, and species. In 1986, the authors of this study collected organisms at 400 and 1000 meters deep on the south-east Australian continental slope and only just recently isolated two types of mushroom-shaped organisms that they couldn't classify into an existing phylum.

The new organisms are multicellular and mostly non-symmetrical, with a dense layer of gelatinous material between the outer skin cell and inner stomach cell layers. The organisms were classified as two new species in a new genus, Dendrogramma enigmatica and Dendrogramma discoides, in the new family, Dendrogrammatidae. 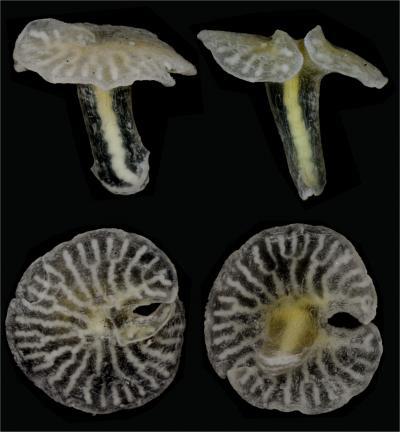 This is a photo of the new deep sea mushroom-shaped
Dendrogrammatidae
organism. Credit: Just et al.

Scientists found similarities between the organisms and members of Ctenophora and Cnidaria and suggest that they may be related to one of these phyla. Scientists also found similarities to 600 million year-old Pre-Cambrian extinct life forms, suggested by some to be early but failed attempts at multi-cellular life.

The authors originally preserved the specimens in neutral formaldehyde and stored them in 80% ethanol, which makes them unsuitable for molecular analysis. However, they suggest attempting to secure new samples for further study, which may provide further insight into their relationship to other organisms.

Jørgen Olesen added: "New mushroom-shaped animals from the deep sea discovered which could not be placed in any recognized group of animals. Two species are recognized and current evidence suggest that they represent an early branch on the tree of life, with similarities to the 600 mill old extinct Ediacara fauna."