When it comes to our senses, there is a lot of diversity in people. One person might have 10X the taste buds on their tongue as another person, for example, so they are more sensitive to bitters and sweets. But is there a quantifiable gender difference in the ability to hear or taste?

A new paper says women smell better than men - not as in their odor, but in their ability to detect and evaluate odors. If so, they postulate that sex differences in olfactory detection may play a role in differentiated social behaviors and may be connected to one's perception of smell, which is naturally linked to associated experiences and emotions.

The big question is whether or not any olfactory superiority is cognitive or emotional rather than perceptual. 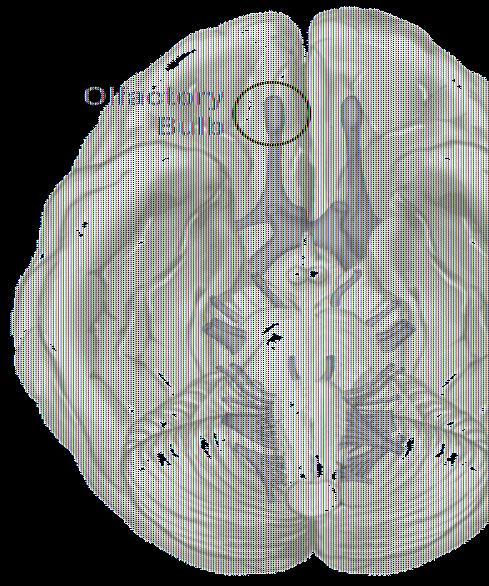 The olfactory bulb transmits information from the nose to the brain. Credit: Roberto Lent

Previous studies investigating the biological roots of greater olfactory sensitivity in women have used imaging methods that allow gross measures of brain structures. The results of such studies have been controversial, leaving unanswered the question of whether differences in olfactory sensitivity have biological roots or whether they represent a mere by-product of social and cognitive differences between genders.

The isotropic fractionator, a fast and reliable technique previously developed by a group of researchers at Federal University of Rio de Janeiro, measures the absolute number of cells in a given brain structure such as the olfactory bulb, which is the first brain region to receive olfactory information captured by the nostrils.

Using this technique, a group of researchers led by Prof. Roberto Lent from the Institute of Biomedical Sciences at the Federal University of Rio de Janeiro and the National Institute of Translational Neuroscience, Ministry of Science and Technology in Brazil, has finally found biological evidence in the brains of men and women that may explain the olfactory difference between genders.

The group examined post-mortem brains from seven men and 11 women who were all over the age of 55 at the time of death. All individuals were neurologically healthy and none worked in professions requiring exceptional olfactory abilities, such as coffee-tasting or professional cooking. By calculating the number of cells in the olfactory bulbs of these individuals, the group (that also included researchers from the University of São Paulo, the University of California, San Francisco, and the Albert Einstein Hospital in São Paulo) discovered that women have on average 43% more cells than men in this brain structure. Counting neurons specifically, the difference reached almost 50% more in women than men.

The question remains whether this higher cell number accounts for the differences in olfactory sensitivity between sexes. "Generally speaking, says Prof. Lent, larger brains with larger numbers of neurons correlate with the functional complexity provided by these brains. Thus, it makes sense to think that more neurons in the female olfactory bulbs would provide women with higher olfactory sensitivity".

The fact that few cells are added to our brains throughout life suggests that women are already born with these extra cells. But why do women's brains have this pre-wired ability? What mechanisms are responsible for this higher number of cells in their olfactory bulbs? Some believe this olfactory ability is essential for reproductive behaviors such as pair bonding and kin recognition.

If this holds true, then superior olfactory ability is an essential trait that has been inherited and then maintained throughout evolution, an idea expressed by Romanian playwright Eugene Ionesco when he said "a nose that can see is worth two that sniff".