News Staff
Potatoes are an essential food for humans and now two new varieties produced by the Basque Institute for Agricultural Research and Development have been added to the Registry of Commercial Varieties.

‘Entzia’ has a purple flesh and has been created to have high antioxidant components, which will get it considered a functional food by nutritionists. It also has a considerable quantity of anthocyanins, a pigment with a great bioactive potential and beneficial effects for human health. Its concentration of bioactive compounds, such as phenols and vitamin C, and its antioxidant capacity are significantly higher than in the rest of the conventional varieties. Its phenol values are between 4 and 30 times higher than in the rest; and its antioxidant capacity, between 2 and 10 times higher. It also has a high concentration of iron, zinc, potassium and magnesium, four essential minerals for proper human nourishment. A 100g portion of this fresh potato contains about 25% of the recommended daily intake (RDI) of iron and zinc plus 17% and 22% of the RDI of potassium and magnesium. 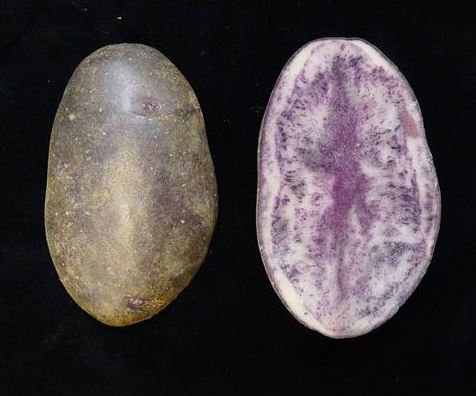 The ‘Miren’ variety has a concentration of carotenes, an essential chemical element in the diet, higher than that of the ordinary commercial varieties and is probably more commercial since it is straightforward to wash and has the oval shape people expect.

Another feature of ‘Entzia’ and ‘Miren’ are their increased resistance to disease, mainly to the ‘Y’ potato virus and Pectobacterium atrosepticum, respectively. Both diseases weaken the plant and deplete output considerably.

The advantages of these local varieties include greater yield, cost cutting, greater resistance to a range of diseases, apart from not having to rely on externally acquired varieties.
News Articles
More Articles All Articles
About