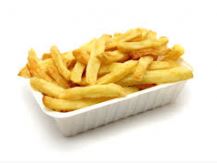 Lovers of french fries, rejoice: the new, non-bruising potato made by Idaho food giant Simplot has hit the market.

The spuds have joined a growing list of GM crops designed to appeal to consumers who want health and appearance benefits; foods like the non-browning GM Arctic apple, and modified vegetable oils with fewer saturated fats and more Omega-3 fatty acids. Companies developing these new products hope they’ll be able to win over skeptical or health-conscious consumers.

Simplot spent more than 14 years formulating the new potato varieties. The process is called “gene silencing,” where scientists extract genes from cultivated potatoes and insert them in their target varieties. The new genes then mute the old genes that lead to bruising and browning. You can read the American Council on Science and Health’s in-depth publications on biotechnology here.

And here’s a kicker for both foodies and chemophobes: The GM potato is considered healthier than the traditional potato because gene silencing has also enabled the release of about 70 percent less acrylamide when the spuds are deep fried. Acrylamide is a chemical that forms in foods containing carbohydrates as a result of cooking at high temperatures and is found in about 40 percent of the calories consumed by Americans. It has been around for as long as people have been baking, roasting, toasting or frying foods but a recent (unwarranted) fear of chemophobes is that the chemical is cancer-causing.

But actually, acrylamide is a neurotoxin — not a carcinogen — in high-exposure levels among occupationally-exposed workers, or those with extremely high dose exposures. It is not harmful in low doses when released from frying potatoes, so it would make sense that folks who tend to worry over any chemical they hear is in foods would applaud this development.

Will that be enough to tater, excuse us — cater — to the organic consumer? We’d like to think so, but probably not.