News Staff
Astronomers have found more than 300 alien (extrasolar) worlds so far. Most of these are gas giants like Jupiter, and are either too hot (too close to their star) or too cold (too far away) to support life as we know it.

Sometime in the near future, however, astronomers will probably find one that's just right – a planet with a solid surface that's the right distance for a temperature that allows liquid water -- an essential ingredient in the recipe for life.

But the first picture of this world will be just a speck of light. How can we find out if it might have liquid water on its surface? If it has lots of water – oceans – we are in luck.


Video from EPOXI shows the moon transiting Earth using a red-green-blue filter. The first pictures of an Earth-like extrasolar planet will not be this detailed. Instead, the images will be more like the Voyager picture of Earth as a single point of light (below).  Videos credit: Donald J. Lindler, Sigma Space Corporation/GSFC; EPOCh/DIXI Science Teams

NASA-sponsored scientists looking back at Earth with the Deep Impact/EPOXI mission have developed a method to indicate whether Earth-like extrasolar worlds have oceans.

"A 'pale blue dot' is the best picture we will get of an Earth-like extrasolar world using even the most advanced telescopes planned for the next couple decades," said Nicolas B. Cowan, of the University of Washington. "So how do we find out if it is capable of supporting life? If we can determine that the planet has oceans of liquid water, it greatly increases the likelihood that it supports life. We used the High Resolution Imager telescope on Deep Impact to look at Earth from tens of millions of miles away -- an 'alien' point of view -- and developed a method to indicate the presence of oceans by analyzing how Earth's light changes as the planet rotates. This method can be used to identify extrasolar ocean-bearing Earths." 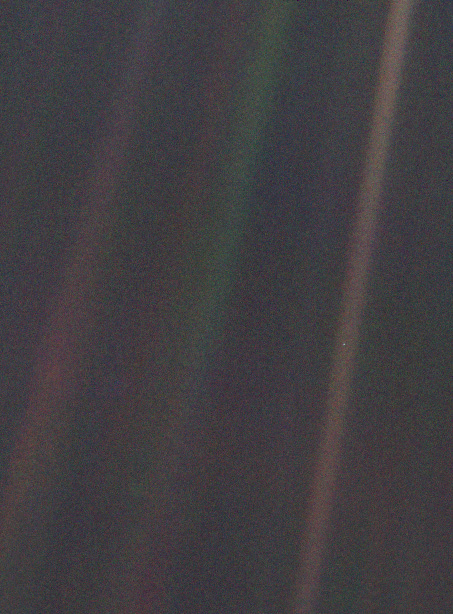 This narrow-angle color image of the Earth, dubbed 'Pale Blue Dot', is a part of the first ever 'portrait' of the solar system taken by Voyager 1. The spacecraft acquired a total of 60 frames for a mosaic of the solar system from a distance of more than 4 billion miles from Earth and about 32 degrees above the ecliptic. From Voyager's great distance Earth is a mere point of light, less than the size of a picture element even in the narrow-angle camera. Earth was a crescent only 0.12 pixel in size. Coincidentally, Earth lies right in the center of one of the scattered light rays resulting from taking the image so close to the sun. This blown-up image of the Earth was taken through three color filters -- violet, blue and green -- and recombined to produce the color image. The background features in the image are artifacts resulting from the magnification. Credit: NASA JPL

Cowan is lead author of a paper on this research appearing in the August 2009 issue of the Astrophysical Journal. Our planet looks blue all the time because of Rayleigh scattering of sunlight by the atmosphere, the same reason that the sky appears blue to us down on the surface, points out Cowan. "What we studied in this paper was how that blue color changes in time: oceans are bluer than continents, which appear red or orange because land is most reflective at red and near-infrared wavelengths of light. Oceans only reflect much at blue (short) wavelengths," said Cowan.

The maps that the team created are only sensitive to the longitudinal (East - West) positions of oceans and continents. Furthermore, the observations only pick out what is going on near the equator of Earth: the equator gets more sunlight than higher latitudes, and the EPOXI spacecraft was above the equator when the observations were taken.

These limitations of viewing geometry could plague observations of extrasolar planets as well: "We could erroneously see the planet as a desert world if it had a nearly solid band of continents around its equator and oceans at its poles," said Cowan. 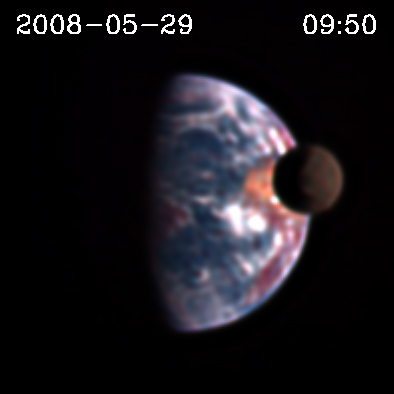 From 31 million miles away and cropped from a much larger photograph.  Credit: NASA

Other things besides water can make a planet appear blue; for example, in our solar system the planet Neptune is blue due in part to the presence of methane in its upper atmosphere. "However, a Neptune-like world would appear as an unchanging blue using this technique, and again it's the changes in the blue color that reveal oceans to us," said Cowan. "There are some weird scenarios you can dream up that don't involve oceans but would lead to varying patches of blue on a planet, but these are not very plausible."

"A spectrum of the planet's light that reveals the presence of water is necessary to confirm the existence of oceans," said Drake Deming, a co-author of the paper at NASA's Goddard Space Flight Center in Greenbelt, Md.

Instruments that produce a spectrum are attached to telescopes and spread out light into its component colors, like a prism separates white light into a rainbow. Every element and molecule emits and absorbs light at specific colors. These colors can be used like a fingerprint to identify them.

"Finding the water molecule in the spectrum of an extrasolar planet would indicate that there is water vapor in its atmosphere, making it likely that the blue patches we were seeing as it rotates were indeed oceans of liquid water. However, it will take future large space telescopes to get a precise spectrum of such distant planets, while our technique can be used now as an indication that they could have oceans," said Deming. The technique only requires relatively crude spectra to get the intensity of light over broad color ranges, according to the team.

NASA's Deep Impact made history when the mission team directed an impactor from the spacecraft into comet Tempel 1 on July 4, 2005. NASA recently extended the mission, redirecting the spacecraft for a flyby of comet Hartley 2 on Nov. 4, 2010. EPOXI is a combination of the names for the two extended mission components: a search for extrasolar planets during the cruise to Hartley 2, called Extrasolar Planet Observations and Characterization (EPOCh), and the flyby of comet Hartley 2, called the Deep Impact eXtended Investigation (DIXI).