Parents go to great lengths to ensure the health and well-being of their developing offspring. The favor, however, may not always be returned.

Dramatic research has shown that during pregnancy, cells of the fetus often migrate through the placenta, taking up residence in many areas of the mother's body, where their influence may benefit or undermine maternal health.

The presence of fetal cells in maternal tissue is known as fetal microchimerism. The term alludes to the chimeras of ancient Greek myth--composite creatures built from different animal parts, like the goat-lion-serpent depicted in an Etruscan bronze sculpture. 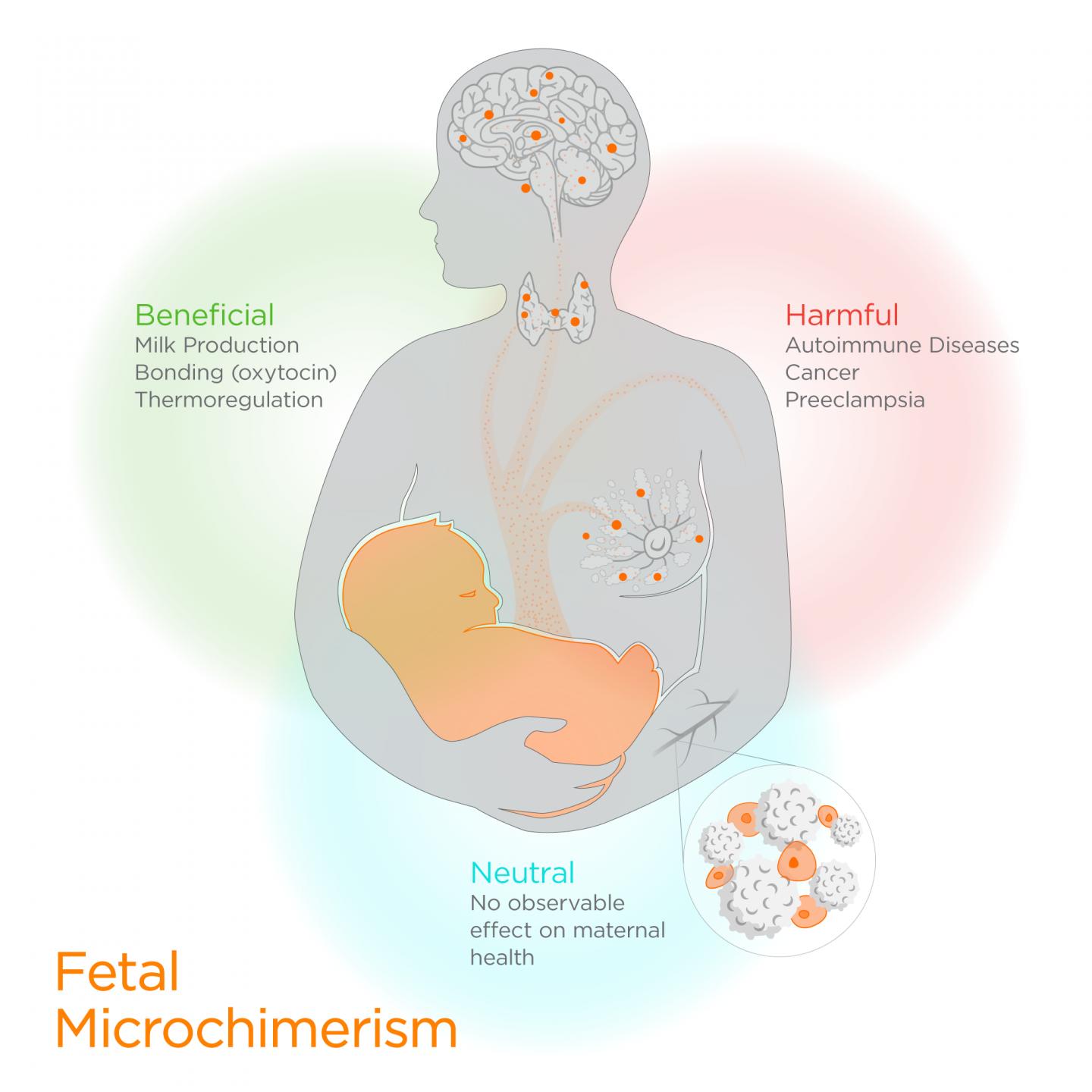 Fetal microchimerism. During pregnancy, cells of the fetus often migrate through the placenta, taking up residence in many areas of the mother's body, where their influence may benefit or undermine maternal health. Credit: Infographic by Jason Drees, Biodesign Institute

According to Amy Boddy, a researcher at Arizona State University's Department of Psychology and lead author of a new study, chimeras exist. Indeed, many humans bear chimerical traits in the form of foreign cells from parents, siblings or offspring, acquired during pregnancy.

"Fetal cells can act as stem cells and develop into epithelial cells, specialized heart cells, liver cells and so forth. This shows that they are very dynamic and play a huge role in the maternal body. They can even migrate to the brain and differentiate into neurons," Boddy says "We are all chimeras."

Fellow ASU researchers Angelo Fortunato, Melissa Wilson Sayres and Athena Aktipis joined Boddy for the new study. Fortunato is with the Biodesign's Institute's Human and Comparative Genomics Lab. Wilson Sayres and Aktipis--both with Biodesign's Center for Evolution and Medicine-- are also researchers with ASU's School of Life Sciences and Department of Psychology, respectively.

While fetal microchimerism is a common occurrence across placental mammals, (including humans), the effects of such cells on maternal health remain a topic of fierce debate in the biological community.

In research appearing in the advanced online edition of the journal Bioessays, Boddy and her colleagues review the available literature on fetal microchimerism and human health, applying an evolutionary framework to predict when fetal cells are inclined to act cooperatively to enhance maternal health and when their behavior is likely to be competitive, occasionally leading to adverse effects on the mother.

Fetal cells may do more than simply migrate to maternal tissues. The authors suggest they can act as a sort of placenta outside the womb, redirecting essential assets from the maternal body to the developing fetus. Cells derived from the fetus--which can persist in maternal tissues for decades after a child is born--have been associated with both protection and increased susceptibility to a range of afflictions, including cancer and autoimmune diseases like rheumatoid arthritis.

If some degree of fetal microchimerism exerts a beneficial effect on maternal and offspring survival, it will likely be selected for by evolution as an adaptive strategy.

A review of existing data on fetal microchimerism and health suggests that fetal cells enter a cooperative relationship in some maternal tissues, compete for resources in other tissues and may exist as neutral entities--hitchhikers simply along for the ride. It is likely that fetal cells play each of these roles at various times.

Fetal cells can also provide benefits to mothers, migrating to damaged tissue and repairing it. Their presence in wounds--including caesarian incisions--points to their active participation in healing. In other cases, fetal cells from the placenta are swept through the bloodstream into areas including the lung, where they may persist merely as bystanders.

Applying a cooperation and conflict approach, the authors make testable predictions about the circumstances favoring fetal cell cooperation or competition and attendant positive or negative effects on maternal health.

"Cooperation theory and evolutionary analyses are powerful tools for helping us to unravel the complex effects of fetal cells on the maternal body. They can help us to predict when fetal cells are likely to contribute to maternal health and when they may be manipulating maternal tissues for the benefit of the offspring and potentially contributing to maternal disease in the process," says Aktipis.

Evolutionary theory suggests that fetal cells will act cooperatively to enhance maternal health where the economic cost of doing so is low, for example, in tissue maintenance. Where the cost to fetal cells is high, including the division of limited resources between fetus and mother, competition is the more likely outcome, with escalating conflict leading to harmful effects for mother, developing fetus or both.

Fetal cells appear to play a complex role in the female breast and have been detected in over half of all women sampled. Given the co-evolution of maternal and fetal cells over the 160 million year course of placental mammalian evolution, it appears likely that fetal cells are active participants in breast development and lactation.

Milk production is a vital but energy-intensive activity for the mother, requiring subtle regulation. Poor lactation--a common affliction--may be linked with low fetal cell count in breast tissue. (The hypothesis suggests that a simple, non-invasive test for fetal cell abundance in breast milk could provide the first conclusive evidence of fetal cell influence on maternal health.)

With respect to breast cancer, existing data paints a complex picture. Fetal cells are generally found in lower abundance in women with breast cancer, compared with healthy women, suggesting they may play a protective role. On the other hand, some data indicates that fetal cells may be linked with a transient increase in the risk of breast cancer in the years immediately following pregnancy.

The thyroid gland performs a broad range of regulatory functions and during pregnancy, is involved in the efficient transfer of heat from the mother to the offspring. Again, fetal cells found in the thyroid are implicated and may be manipulating thyroid activity to enhance heat transfer to the fetus, potentially at the energetic expense of the mother.

Fetal cells occur more frequently in both the blood and thyroid tissue of women with thyroid diseases including Hashimoto's thyroiditis, Graves' disease and thyroid cancer, compared with healthy women. (Intriguingly, cancer of the thyroid is the only non-sex-specific form of cancer found more frequently in women than men.) The authors suggest that the maternal system, in attempting to wrest control from fetal cell influence, may induce hazardous levels of autoimmunity and inflammation.

The current overview represents a tentative step toward untangling the myriad influences of fetal microchimerism on human health. One of the more tantalizing possibilities raised in the new study is that fetal cells may be commandeering neural pathways overseeing emotion and behavior. They may, for example, hijack mechanisms triggering the release of oxytocin, a hormone long associated with the emotional bonding of mother and infant.

Indeed, fetal cells could be suspects in a broad range of physical and emotional manifestations in the mother, including pregnancy-related afflictions like morning sickness or postpartum depression. Even early onset menopause could be the result of fetal cell efforts to remove the mother from further child-bearing, in order to secure maximum resources for the fetus and eventually, the growing child.

Finally, the authors note, fetal microchimerism may be one piece of a subtle and dizzyingly complex puzzle. Cell traffic is actually bi-directional, with the fetus receiving cells from the mother. Fetal cells from maternal tissue may cross the placental barrier during subsequent pregnancies, potentially influencing the health of later offspring. To further complicate matters, cells from later fetuses can also cross the placenta to enter the microchimeric arena, perhaps introducing sibling rivalries for the mother's limited resources.

Fetal cells may eventually provide a novel and powerful means of diagnosing existing conditions and predicting long-term maternal health. As the authors note, they could also be applied therapeutically in the future, potentially for the treatment of poor lactation, for wound healing, tumor reduction and perhaps even pregnancy-linked psychological disorders.

Identification of fetal cells in maternal gut, liver or brain tissues is only a first step.

To tease out the true function of these cells, researchers need to examine their gene expression and interaction with maternal tissues. Inspection of maternal cells in surrounding tissue will help determine if they are immune cells targeting fetal cell interlopers or normal epithelial cells, existing in harmony.

"If future research bears out the predictions of this framework, it could transform the way we approach, treat and prevent a variety of diseases that affect women, especially new mothers," says Aktipis.

Improved methods of screening will help scientists listen in on the intricate dialogue between fetal and maternal cells, deepening our understanding of maternal health and disease.