News Staff
One of developmental biology's biggest mysteries is ontogeny and the signals that transform masses of undifferentiated cells into tremendously complex organisms.

A new paper suggests that it all begins with a single "master" growth factor receptor,  nuclear Fibroblast Growth Factor Receptor 1 (nFGFR1), that regulates the entire genome.  The research using mouse embryonic stem cells hopes to challenge the supposition that specific types of growth factors only functioned at a cell's surface and that growth factors function from within the nucleus. 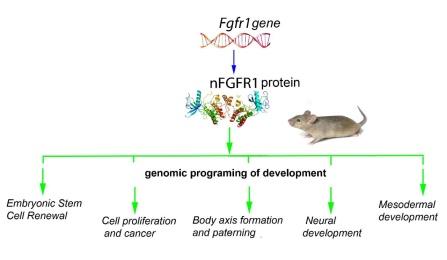 "Our research shows how a single growth factor receptor protein moves directly to the nucleus in order to program the entire genome," says senior author Michal K. Stachowiak, PhD, professor in the Department of Pathology and Anatomical Sciences in the University of Buffalo School of Medicinehe said.

Organizing 'this cacophony of genes'

"We've known that the human body has almost 30,000 genes that must be controlled by thousands of transcription factors that bind to those genes," Stachowiak said, "yet we didn't understand how the activities of genes were coordinated so that they properly develop into an organism.  "Now we think we have discovered what may be the most important player, which organizes this cacophony of genes into a symphony of biological development with logical pathways and circuits."

To study how nuclear FGFR1 worked, the team used genome-wide sequencing of mouse embryonic stem cells programmed to develop cells of the nervous system, with additional experiments in which nuclear FGFR1 was either introduced or blocked. The researchers found that the protein was responsible, either alone or with so-called partner nuclear receptors, for ensuring that embryonic stem cells develop into differentiated cells. By targeting thousands of genes, it controls the development of the major points of growth in the body (known as axes) as well as neuronal and muscle development.

The research shows that nuclear FGFR1 binds to promoters of genes that encode transcription factors, the proteins that control which genes are turned on or off in the genome.

"We found that this protein works as a kind of 'orchestration factor,' preferably targeting certain gene promoters and enhancers. The idea that a single protein could bind thousands of genes and then organize them into a hierarchy, that was unknown," Stachowiak said. "Nobody predicted it."