News Staff
Wine, medicine and movies are two great examples of how the naturalistic fallacy - the old ways are better - retain a vice-like grip on aspects of culture.  The naturalistic fallacy issues of wine tasting and medicine have been well-documented on Science 2.0 and, as anyone who got stuck watching "Crash" or "American Beauty" can tell you, awards and and critical acclaim in films also needs to be replaced with 21st century technology.

Researchers at Northwestern University have done just that; they have found that the best predictor of a movie's significance is how often a movie is referenced by other movies. In other words, a movie's significance is decided by today's and tomorrow's film directors -- not the critics.  No one is doing an homage to "Crash" but movies like "The Wizard of Oz", "Star Wars" and "The Godfather" have been referenced in movies so many times people feel like they have watched them even if they haven't. 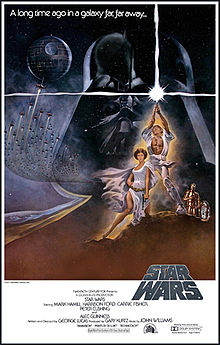 Star Wars won an Academy Award in 1978 - for Best Film Editing. That tells you all you need to know about how well critics and awards know good movies. Link: Wikipedia

"Movie critics can be overconfident in spotting important works, and they have bias," said Luís Amaral, a professor of chemical and biological engineering and co-director the Northwestern Institute on Complex Systems. "Our method is as objective as it gets."

The researchers found their automated method of movie citations is better at predicting greatness, especially in movies 25 years old or older, than these runners-up: the expertise of movie critics (a group of critics or a single critic), the wisdom of the crowd, the numbers of awards won and the amount of box office sales, among others.

Based on this analysis, Amaral plans to also assess the true importance of scientific papers, paintings and music.

The research team conducted a big data study of 15,425 U.S.-produced films listed in the Internet Movie Database (IMDb). Specifically, they looked to see how well an approach predicted a movie's inclusion in the National Film Registry of the U.S. Library of Congress, which is akin to the National Baseball Hall of Fame.

In their analysis, the researchers found the number of times a movie 25 years or older is referenced by other movies best predicts inclusion in this registry of American films deemed "culturally, historically or aesthetically significant."

Films with the most long-gap citations that also are in the National Film Registry are "The Wizard of Oz," "Star Wars," "Psycho," "Casablanca" and "Gone With the Wind."

"Directors keep coming back to movies that are significant," Amaral said. "If you show a little bit from 'Pscyho,' such as referencing the shower scene, you are putting that whole movie in front of the viewer of the new movie."

"There is something about a movie that is hidden to us, but there are measurable things, such as critic ratings, awards and referencing by other filmmakers, that hint at this hidden element -- a movie's significance," he said. "We find that ultimately it is the creators, the filmmakers themselves, who will determine which movies are important, not the expert critics."

Also important, the researchers write, is that the automated method can easily be applied to older films for which no other rating may be available.

Amaral enjoys movies, but what he really wants to do is develop a method for identifying the most significant scientific papers. Given the varied sizes of scientific fields, the sheer number of citations is not sufficient for determining greatness, he said.

"More than 1 million scientific papers are published each year worldwide," Amaral said. "It can be difficult to distinguish a good scientific paper from an average one, much like the movies. My next goal is to develop a good measure of scientific citations to get inside what is going on in the scientific literature."

Article: "Cross-evaluation of metrics to estimate the significance of creative works", Proceedings of the National Academy of Sciences (PNAS).
News Articles
More Articles All Articles
About