In the television show "Cosmos", the writers and host Neil deGrasse Tyson implied that the atmosphere on Venus was due to a runaway greenhouse gas effect. They also said Giordano Bruno was a martyr for astronomy and that Saturn was the 'jewel' of the solar system.

The only one of those partially correct is that Earth has a variety of factors that make our built-in atmospheric carbon dioxide regulator work where the one on Venus does not – including geologic cycles that churn up the planet's rocky surface. We also have gravity that keeps hydrogen from escaping into space after solar radiation breaks them, as happens on Venus.

Essentially, Earth is 'just right' and a cultural metaphor is often the "Goldilocks" story, where a difficult-to-please intruder isn't happy with 66% of everything she encounters during a home invasion.  Until she finds something 'just right'.

Researchers from USC and Nanjing University say water isn't the prime reason that we don't have a CO2 atmosphere and sulfuric rain clouds, like Venus has - they say that "fresh" rock pushed to the surface via mountain formation effectively acts as a kind of sponge, soaking up CO2. 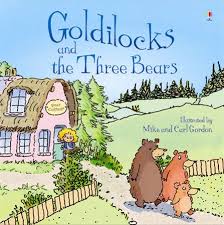 Goldilocks eventually settled in when things were just right. So did life in this solar system. Sorry, Saturn, you aren't the jewel of anything. Link: usborne.com

If this rock formation were too quick, it would deplete atmospheric CO2 levels to a point that we would have Global Cooling within a few million years. Too slow and the CO2 from volcanoes might not be offset by water alone. So the researchers say "fresh" rock exposed by uplift also emits carbon through a chemical weathering process, which replenishes the atmospheric carbon dioxide at a comparable rate. Rocks have not been implicated in global warming to-date.

"Our presence on Earth is dependent upon this carbon cycle. This is why life is able to survive," said Mark Torres, lead author of the paper and a doctoral fellow at USC.

While human-made atmospheric carbon dioxide increases are currently driving significant changes in the Earth's climate, the geologic system has kept things balanced for million of years.

"The Earth is a bit like a big, natural recycler," West said. Torres and West studied rocks taken from the Andes mountain range in Peru and found that weathering processes affecting rocks released far more carbon than previously estimated, which motivated them to consider the global implications of CO2 release during mountain formation.

The researchers noted that rapid erosion in the Andes unearths abundant pyrite — the shiny mineral known as "fool's gold" because of its deceptive appearance — and its chemical breakdown produces acids that release CO2 from other minerals. These observations motivated them to consider the global implications of CO2 release during mountain formation.

Like many other large mountain ranges, such as the great Himalayas, the Andes began to form during the Cenozoic period, which began about 60 million years ago and happened to coincide with a major perturbation in the cycling of atmospheric carbon dioxide. Using marine records of the long-term carbon cycle, Torres, West, and Li reconstructed the balance between CO2 release and uptake caused by the uplift of large mountain ranges and found that the release of CO2 release by rock weathering may have played a large, but thus far unrecognized, role in regulating the concentration of atmospheric carbon dioxide over the last roughly 60 million years.