The public has long suffered from green fatigue, where constant doomsday prophecies by environmental groups have become background noise, but there is good news too. It just has to come from the world of science instead.

After the detection of the ozone-depleting properties of  chlorofluorocarbons
(CFCs) in the 1970s, data from satellite measurements in 1985 were startling; a huge hole had been discovered over the Antarctic in the ozone layer that protects the Earth from dangerous, carcinogenic UV rays and it was unclear how much was natural and what had been caused by man. 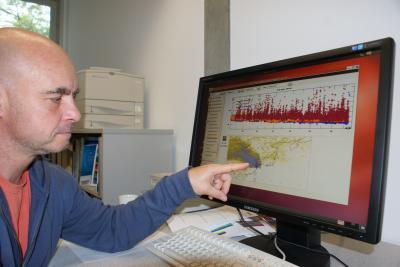 Stefan Reimann, Empa researcher who contributed to the latest UN ozone report, showing measurement data on ozone-depleting tetrachloromethane. The question is: who is still releasing this gas today? Image: Empa

In 1987, politicians around the world reached agreement on the Montreal Protocol that bans ozone-depleting substances, in particular chlorofluorocarbons. 197 countries ratified it and progress has been monitored since, producing periodic updates. The eighth in the series of these reports was published on 10 September 2014 at a joint press conference of WMO (World Meteorological Organization) and UNEP (United Nations Environment Program).

Ozone layer returning to its 1980 levels

The Antarctic ozone hole continues to appear every September, but unlike in the 1980s and 1990s it is no longer growing. Since the turn of the millennium it has shown signs of recovery. Model calculations reveal that by 2050 the ozone layer will return to its 1980 levels. The concentration of most ozone depleting substances (mainly CFCs) mentioned in the Montreal Protocol has fallen as expected.

Now, surprisingly "new" CFCs have been discovered in the atmosphere, though they have never been produced on an industrial scale and instead can escape as industrial by-products. The good news is that concentration of these substances is between 100 and 1,000 times lower than the classic ozone depleting substances.

CFCs used in the past, such as in insulating foams and cooling systems, still pose a significant threat to the ozone layer. During the recycling of these systems, it is important to collect CFCs separately and destroy them by incineration; otherwise this legacy of the past would harm the ozone layer more than all new substances together.

Classical ozone depleting substances are thus slowly disappearing but hydrofluorocarbons (HFCs), the replacement for ozone-depleting substances, are increasing by around 7 percent a year. These substances do not harm the ozone layer but are said to have a high greenhouse potential and should be replaced in future but there are open questions about the replacement substances supposed to mitigate the greenhouse effect. HFO-1234yf, for example, is intended to be used in AC system of new cars. This substance decomposes in the atmosphere into trifluoroacetic acid – a compound that is not degraded in nature and, therefore, accumulates in the environment.

During the regular monitoring of trace gas data from the global measurement networks, the atmospheric researchers noticed significant deviations. These findings are also mentioned in the latest UNEP report. For instance, the concentration of the ozone-depleting gas carbon tetrachloride is not falling by four percent (as predicted) but by only one percent – although production of this substance is only allowed as intermediate, with very small expected emissions. New measurement data indicate that the emissions do not come from Europe or North America.