It's not just American cars that are hurting the environment, researchers in California and Colorado have set their sights on ... rocket launches?

Future ozone losses from unregulated rocket launches will eventually exceed ozone losses due to chlorofluorocarbons, or CFCs, which stimulated the 1987 Montreal Protocol banning ozone-depleting chemicals, said Martin Ross, chief study author from The Aerospace Corporation in Los Angeles. The study, which includes the University of Colorado at Boulder and Embry-Riddle Aeronautical University, provides a market analysis for estimating future ozone layer depletion based on the expected growth of the space industry and known impacts of rocket launches.

"As the rocket launch market grows, so will ozone-destroying rocket emissions," said Professor Darin Toohey of CU-Boulder's atmospheric and oceanic sciences department. "If left unregulated, rocket launches by the year 2050 could result in more ozone destruction than was ever realized by CFCs."

A paper on the subject by Ross and Manfred Peinemann of The Aerospace Corporation, CU-Boulder's Toohey and Embry-Riddle Aeronautical University's Patrick Ross appeared online in March in the journal Astropolitics.

Since some proposed space efforts would require frequent launches of large rockets over extended periods, the new study was designed to bring attention to the issue in hopes of sparking additional research, said Ross. "In the policy world uncertainty often leads to unnecessary regulation," he said. "We are suggesting this could be avoided with a more robust understanding of how rockets affect the ozone layer."

Current global rocket launches deplete the ozone layer by no more than a few hundredths of 1 percent annually, said Toohey. But as the space industry grows and other ozone-depleting chemicals decline in the Earth's stratosphere, the issue of ozone depletion from rocket launches is expected to move to the forefront.

Today, just a handful of NASA space shuttle launches release more ozone-depleting substances in the stratosphere than the entire annual use of CFC-based medical inhalers used to treat asthma and other diseases in the United States and which are now banned, said Toohey. "The Montreal Protocol has left out the space industry, which could have been included." 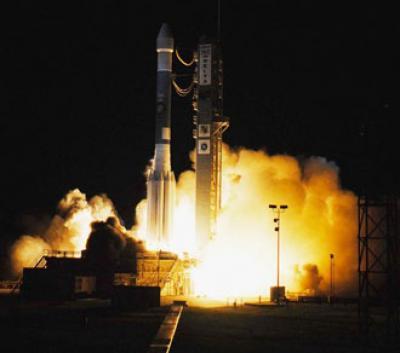 Highly reactive trace-gas molecules known as radicals dominate stratospheric ozone destruction, and a single radical in the stratosphere can destroy up to 10,000 ozone molecules before being deactivated and removed from the stratosphere. Microscopic particles, including soot and aluminum oxide particles emitted by rocket engines, provide chemically active surface areas that increase the rate such radicals "leak" from their reservoirs and contribute to ozone destruction, said Toohey.

In addition, every type of rocket engine causes some ozone loss, and rocket combustion products are the only human sources of ozone-destroying compounds injected directly into the middle and upper stratosphere where the ozone layer resides, he said.

Although U.S. science agencies spent millions of dollars to assess the ozone loss potential from a hypothetical fleet of 500 supersonic aircraft -- a fleet that never materialized -- much less research has been done to understand the potential range of effects the existing global fleet of rockets might have on the ozone layer, said Ross.

Since 1987 CFCs have been banned from use in aerosol cans, freezer refrigerants and air conditioners. Many scientists expect the stratospheric ozone layer -- which absorbs more than 90 percent of harmful ultraviolet radiation that can harm humans and ecosystems -- to return to levels that existed prior to the use of ozone-depleting chemicals by the year 2040.

Rockets around the world use a variety of propellants, including solids, liquids and hybrids. Ross said while little is currently known about how they compare to each other with respect to the ozone loss they cause, new studies are needed to provide the parameters required to guide possible regulation of both commercial and government rocket launches in the future.

"Twenty years may seem like a long way off, but space system development often takes a decade or longer and involves large capital investments," said Ross. "We want to reduce the risk that unpredictable and more strict ozone regulations would be a hindrance to space access by measuring and modeling exactly how different rocket types affect the ozone layer."