News Staff
Researchers have completed a large-scale research project conducted over a five-year period on the African continent to compile the first greenhouse gas budget of African rivers.

Covering 12 rivers spread across the entire continent of Africa, the study shows that greenhouse gas emissions from the rivers are very significant. The researchers trawled the African continent in order to analyze the streams of carbon dioxide (CO2), methane (CH4) and nitrous oxide (N2O), the three main GHG.

The work draws attention to the important role of wetlands (these include inundated forests, flood plains and large "meadows" of floating plants) characterized by intense "aerial" photosynthesis (by submerged vegetation) but the organic matter produced is transferred into the water sooner or later. This organic matter in the water increases the production and emission of CO2 and CH4. The carbon emissions (CO2 and CH4) associated with the humid zones are enormous because the surfaces they occupy are also extremely vast.

In the Congo basin, wetlands (mainly inundated forests) cover an area of 360 000 km2, equivalent to the entire area of Germany. 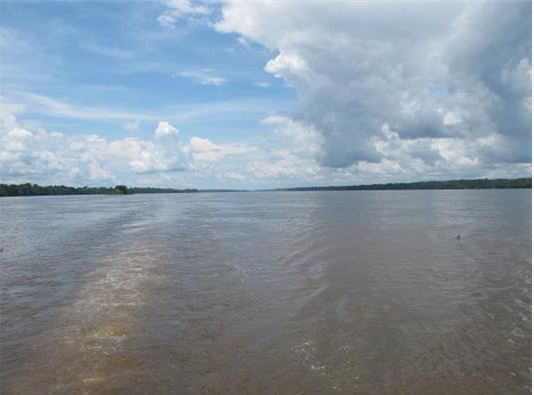 "Due to the fact that rivers link continents to the ocean by carrying organic matter that is partly degraded by bacteria, they play a major role in the production and emission of CO2 and CH4," explains oceanographer Alberto Borges of the University of Liège. "Research concerning GHG emissions in inland waters – rivers, lakes, and reservoirs – began in the 1990s in various developed countries, supported in part by the hydro-electric industry, and supplied valuable information about boreal (Scandinavia, Canada), and temperate (Europe, United States) inland waters. Concerning the tropics which hold 60 % of the freshwaters of the planet, studies were carried out almost exclusively in Brazil, on the Amazon the largest river in the world.

But can the data collected in Brazil be applied to the world’s second largest river, the Congo, also located in the tropics ? Similarly, can the data in the Amazon be applied to semi-arid rivers draining savannah rather than tropical forest? There was some important information lacking here. Given that Africa contains 12 % of the world's softwater, this study supplies a missing piece to the puzzle: a very significant and coherent data set in terms of the methodology employed and concerning an entire continent."

The 12 drainage basins (the area that includes an entire river and all its tributaries, from its source to its mouth) were spread over the entire African territory and all the different variations of these basins according to the corresponding climate and vegetation: from the humid climate dominated by the tropical forest of the river Congo (DRC) to the semi-arid climate dominated by the savannah of the river Tana (Kenya) and the very steep basin of the river Rianila (Madagascar).

"This large spectrum revealed the mechanisms controlling greenhouse gas emissions in inland waters, from basin to basin across the entire African continent. This also opens the way for a comparison study between the Amazon and Congo rivers or any other tropical river, "continues Alberto Borges, who says the study undertaken establishes a "baseline."

"We know that the population of the Democratic Republic of the Congo is set to double, increasing from 65 to 130 million inhabitants in 25 years",he points out."This huge increase will inevitably have an impact on the functioning of the river Congo, probably in response to increased deforestation and a shift towards intensive farming, since current farming practices are traditional. It is conceivable that the number of hydro-electric dams will increase as the hydroelectric energy potential of Africa is currently under-exploited. Similarly, water diversion for purposes of irrigation will increase. All these factors will have consequences for greenhouse gas emissions from rivers."