It has generally been believed that more attractive men had better semen quality.

Male facial attractiveness has been considered an important predictor of female mating preferences because of genetic benefits for offspring - facial traits may signal several quality factors (indirect benefits), such as health and intelligence (e.g. Andersson, 1994). The phenotype-linked fertility hypothesis predicts that male secondary sexual traits are reliable indicators of male fertilization efficiency but studies testing for the phenotype-linked fertility hypothesis have yielded contradictory results. Some studies in non-human animals have found support for the hypothesis whereas others have found either no associations between secondary sexual traits and fertility or even negative correlations.

In Spanish men, semen quality parameters (sperm motility and the proportion of morphologically normal sperm) were positively associated with the male facial attractiveness, but then studies in Australian men various studies found the opposite; males with a low pitched and thus more attractive (masculine) voices had lower concentration of sperm in their ejaculates than men with higher pitched (less masculine) voices. Men with attractive voices are also found to have attractive faces. 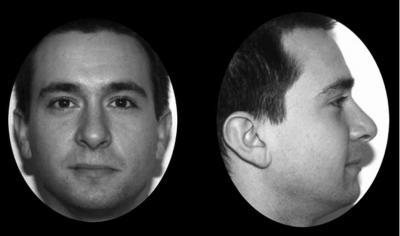 This image shows a frontal and right side lateral view of male face. Prior to attractiveness ratings, color photographs were scanned, and an oval mask was placed over the image to minimize the visual effect of hairstyle. Credit: Journal of Evolutionary Biology

In a new paper based on 50 Caucasian male students from the University of Valencia, facial masculinity was negatively associated with semen quality. As increased levels of testosterone have been demonstrated to impair sperm production, this finding may indicate a trade-off between investments in secondary sexual signaling (i.e. facial masculinity) and fertility.

Interestingly, males estimated facial images generally more attractive than females did, suggesting that males may generally overestimate the attractiveness of other men to females.