The case of Reo, a male chimpanzee that learned to walk again after being paralyzed due to illness, shows how much can be done to rehabilitate animals injured in captivity. So says lead author Yoko Sakuraba of Kyoto University, in an article in Primates, the official journal of the Japan Monkey Centre published by Springer.

In their normal work, researchers of the Primate Research Institute at Kyoto University use chimpanzees' interaction with computers and touch screens to study the cognition and perception of these primates. When Reo was paralyzed from the neck down, dedicated staff put this technology to further use by encouraging the animal to walk again. This is the first case in which a paralyzed chimpanzee has been rehabilitated through such a dedicated programme.

When Reo was 24 years old in 2006, he suddenly became paralyzed when a portion of his spinal cord became inflamed. For the first ten months thereafter, the chimpanzee was severely disabled, lying on his back. He gradually recovered enough to sit up, and could later pull himself upright by using suspended ropes. Intensive physiotherapy over a period of 41 months followed, after which he was able to climb about again using only his arms. 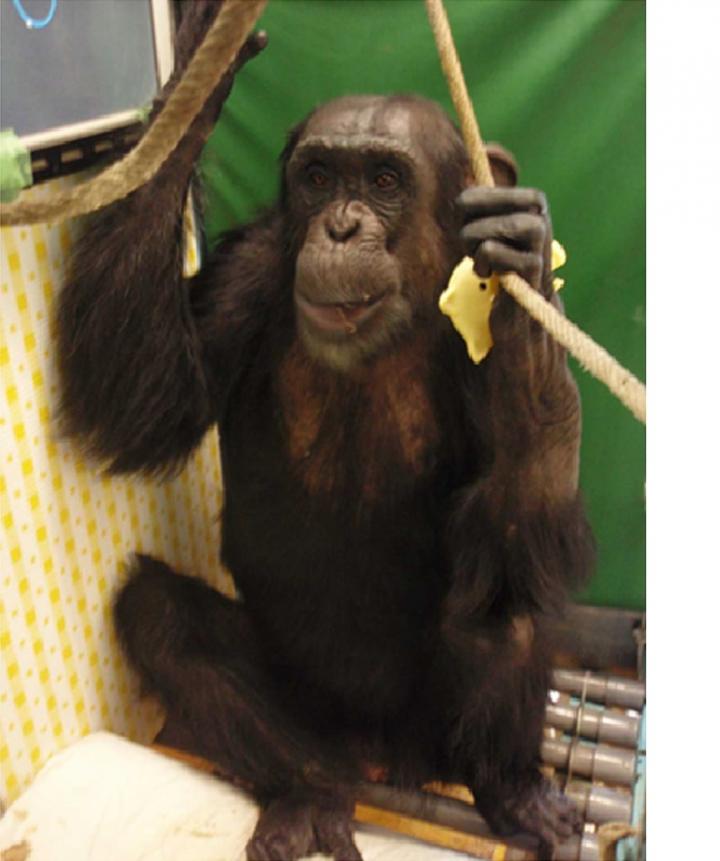 This is Reo sitting up by grasping ropes after lying on his back for 14 months following the onset of acute tetraparesis. Credit: ©Primate Research Institute, Kyoto University

To aid Reo's ultimate integration back among the other twelve animals held at the institute, his carers decided to try to get him walking again. They incorporate a computerised task in this process. This was considered an option because in his youth Reo had learnt how to perform cognitive tasks on a touch panel, and in so doing had become used to receiving food rewards whenever he succeeded at tasks presented to him.

A computer-controlled monitor was therefore placed on one wall, and cognitive tasks were again put to him. It was not plain sailing at first, and the research team had to adapt their ideas seven times before they received any cooperation from a somewhat fearful Reo. Thereafter, whenever he completed a task successfully, a food reward was placed on a tray on the opposite side of the room. This meant that Reo had to move at least two meters to reach it. To busy himself at the screen again to start a new task, he had to make the two meter return journey.

At first he did so using a rope for assistance, but gradually he started travelling in an upright seated position which resembled the side-to-side manner of a penguin walking on land. The rehabilitation sessions encouraged him to increase his movements considerably, and he started walking up to five hundred meters in a two-hour session.

"Cognitive tasks may be a useful way to rehabilitate physically disabled chimpanzees, and thus improve their welfare in captivity," says Sakuraba, who says that euthanasia need not be the only option for animals injured in captivity.

She further notes that the personality and physical condition of each animal must be considered when designing and adjusting such a rehabilitation program.