A peptide and its receptors work to regulate auxin response and control leaf tooth growth in plants.

The plant hormone auxin has been known to take part in the development of leaf teeth, but the exact mechanism of their formation has been a mystery up till now. In this study, the research group has found that a peptide called EPIDERMAL PATTERNING FACTOR-LIKE 2 (EPFL2) and its receptor protein, ERECTA family receptor kinases, control the amount of auxin during leaf tooth growth. In plant leaves where the EPFL2 peptide is inactive, the leaf becomes round without teeth.

Many leaves have small zigzags called leaf teeth on their margin. Examples of plants that contain leaf teeth include cherry blossoms, maples, dandelions and shiso that are used with many Japanese dishes. The leaf teeth of holly and thistle leaves have developed to become hard thorns to protect the plants themselves. Because of the pain that they cause, these leaves have been used as a charm against evil spirits or have appeared in myths to resemble sorrow and pain. Although plant teeth have been known to function for some plants as a means for protection, water drainage, and photosynthesis, the exact reason why they exist and how they are made are yet to be revealed. 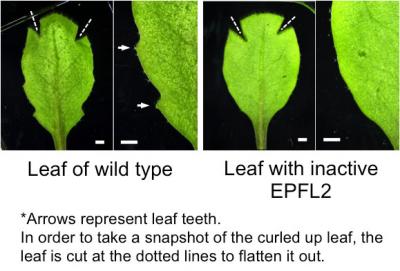 Leaves of wild type have teeth while those with inactive EPFL2 do not develop teeth. Credit: ITbM, Nagoya University

"I first started to wonder about the shape of leaves in 2012," says Uchida, one of the authors of this study. "I originally started this work with Satoshi Okamoto, a student in our group." Toshiaki Tameshige, a postdoctoral researcher at ITbM joined the team in 2013 to take up this work based on his expertise in plant leaves.

"My interest in plant leaves dates back to ten years ago, in 2006," says Dr. Toshiaki Tameshige, Associate Professor Naoyuki Uchida and Professor Keiko Torii of the Institute of Transformative Bio-Molecules (ITbM) of Nagoya University. "I was attracted to leaves because of its beautiful appearance and was fascinated by their various shapes. We decided to look into the function of EPFL2 to see its effect on leaf shapes."

EPFL2 is a peptide (a chain of amino acids) that has recently been discovered. Like the plant hormone, auxin, EPFL2 is secreted from plants but its function had not been uncovered yet. By using the model plant, Arabidopsis thaliana, the team studied the function of EPFL2 and found that plants that are unable to synthesize EPFL2 grow with rounded leaves, which do not develop the leaf teeth that are usually present in the wild type. Thus, they found that EPFL2 was essential for the formation of leaves with a zigzag edge.

Compounds such as the EPFL2 peptide and auxin, which control plant growth, act as 'keys' to activate specific physiological processes. The keys work by interacting with a 'lock', in other words, a receptor protein that binds with plant growth substances. In this study, the group succeeded in identifying the EPFL2 receptor along with EPFL2 for the first time.

The receptor of the EPFL2 peptide was characterized as a protein, which is part of the ERECTA family (ERf). The group found that the plants, which have lost some of the functions of the ERf receptor have developed leaves without teeth in a similar manner to the plants that are unable to make EPFL2.

"The most difficult part of this research was quantifying the degree of zigzags for leaf teeth," says Tameshige. "I have tried several different calculation methods and managed to develop a method for quantifying and comparing leaf teeth. After looking at over 1000 leaves, I was pleased to find evidence that EPFL2 plays an essential role in creating zigzag edges on the leaves."

For the leaf to gain its shape, the leaf starts from a small round shape and growth in specific parts of the leaf are controlled as the plant grows. In other words, growth in some parts of the leaf is enhanced whereas growth in other parts is suppressed to create protrusions and dents in leaves, respectively. There have been reports that auxin is responsible for the edges to protrude and grow into leaf teeth. Auxin is known to accumulate at the tips of leaf protrusions for plants under growth, and does not accumulate in the surrounding skirts of the tip. This difference in the concentration of auxin is necessary for the development of leaf protrusions, but the origin of this concentration difference during tooth growth has been unexplained up till now.

By studying the relationship between the EPFL2 peptide and auxin, the group found that EPFL2 inhibits the accumulation of auxin at skirts of tooth tips. Since EPFL2 was not synthesized at the tip of the leaf teeth but was only present at the skirts of the teeth, this prevented the accumulation of auxin at the skirts of the tip. In plants that are unable to make EPFL2, auxin spreads across the margin of the leaf and thus, leaf teeth are not generated due to the absence of different auxin concentrations across different regions.

The team next studied why the EPFL2 peptide was not made at the tip of the leaf teeth, but was only present at the skirts of the tips. Interestingly, they found evidence indicating that auxin determines the position of EPFL2 generation, i.e. where auxin accumulates, EPFL2 is not synthesized at that position. Therefore, the position where auxin accumulates and the position where EPFL2 is being generated resemble a photographic relationship of positive and negative images.

"I was really excited the moment when we saw that EPFL2 and auxin were in an inverse relationship," says Uchida. "It is difficult to say which is first, as it is like the chicken or the egg; whether auxin determines its accumulation position first or EPFL2 determines where it is synthesized first." This type of mutual relationship, where two substances inhibit each other is called feedback control and is a common mechanism found in various processes, such as shaping of the body and the circadian clock.

"This mechanism on how the EPFL2 peptide creates leaf teeth was uncovered using Arabidopsis thaliana," explains Tameshige. "We hope to see whether the same mechanism occurs in other plants, but our results suggest that EPFL2 may be responsible for creating leaves that have more zigzag edges or have prickly thorns," he continues.

"We are also interested in investigating whether we can synthetically prepare the EPFL2 peptide and use it as an additive to create leaves with unique shapes, for example in foliage plants and in bonsai," says Uchida.

"Furthermore, we may be able to change the leaf shape of vegetables, which will change its appearance as well as its food texture," says Tameshige. "If we can change the shape of leaf vegetables such as lettuce and spinach, this may lead to the generation of new species or brand vegetables that have premium value."

"My next goal is to be able to predict and reproduce the shape of leaves using computer simulation," says Tameshige. "I hope to make mathematical models to explain the relationship between EPFL2 and zigzag edges of leaves. It would be interesting to be able to design plants at will using computer modeling."