Long before animals with limbs (tetrapods) came onto the scene about 365 million years ago, fish already possessed the genes associated with helping to grow hands and feet (autopods) report University of Chicago researchers. 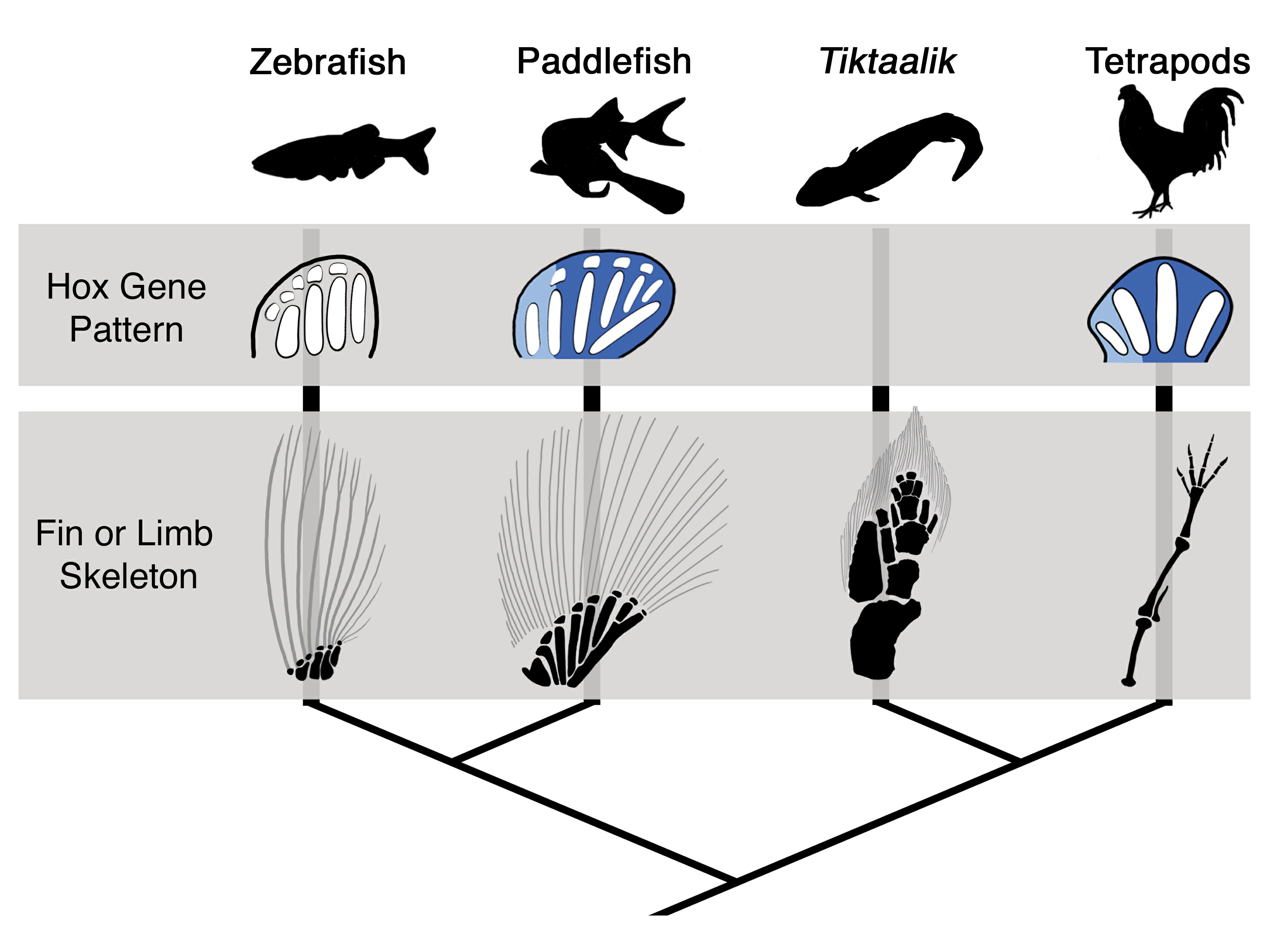 This finding overturns a long-held, but much-debated, theory that limb acquisition was a novel evolutionary event, requiring the descendents of lobed-fin fish to dramatically alter their genes to adapt their bodies to their new environments of streams and swamps.

The paper, "An autopodial-like pattern of Hox expression in the fins of a basal actinopterygian fish," shows that the genetic and developmental toolkit that builds limbs with fingers and toes was around long before the acquisition of limbs, according to the scientists, and that this toolkit exists in some primitive form in a living primitive bony fish, the paddlefish.

"We found that the genetic capability seen in tetrapods to build limbs is present in even more primitive fish," said lead author Marcus Davis, PhD, a postdoctoral fellow in Neil Shubin’s lab at the University of Chicago.

Instead of using zebrafish—the hallmark animal for laboratory development studies—the scientists used paddlefish as a proxy for a more primitive ancestor. Unlike the simple fins of zebrafish, paddlefish have an elaborate fin skeletal pattern similar to that seen in more primitive vertebrates such as sharks and many fossil fish. This sturgeon-type fish is farm raised for caviar, which gives scientists relatively easy access to the animal for study.

The fin of paddlefish resembles that of zebrafish. The interior arrangement is the same, but the back part of the paddlefish fin has longer elements. Accepted theory among scientists has been that the pattern of Hox gene expression seen in zebrafish represents the primitive condition for the fin in any vertebrate, and the group leading to tetrapods elaborated on this Hox expression by adding a second phase and added to the skeletal pattern.

The scientists studied the development of paddlefish fins to test whether the genes activated to make hands and feet in tetrapods were different from the genes activated to make fish fins. Davis working with postdoctoral fellow Randall Dahn, PhD, and Shubin, PhD, professor and associate dean for organismal and evolutionary biology at Chicago and provost of the Field Museum, disproved conventional wisdom.

The team looked at Hox genes—which play a vital role in limb development—in the pectoral fins of paddlefish. To track where the Hox genes are active in the fin, the team inserted molecular markers and showed the activity pattern has similarities to patterns of these same genes in tetrapod limbs. 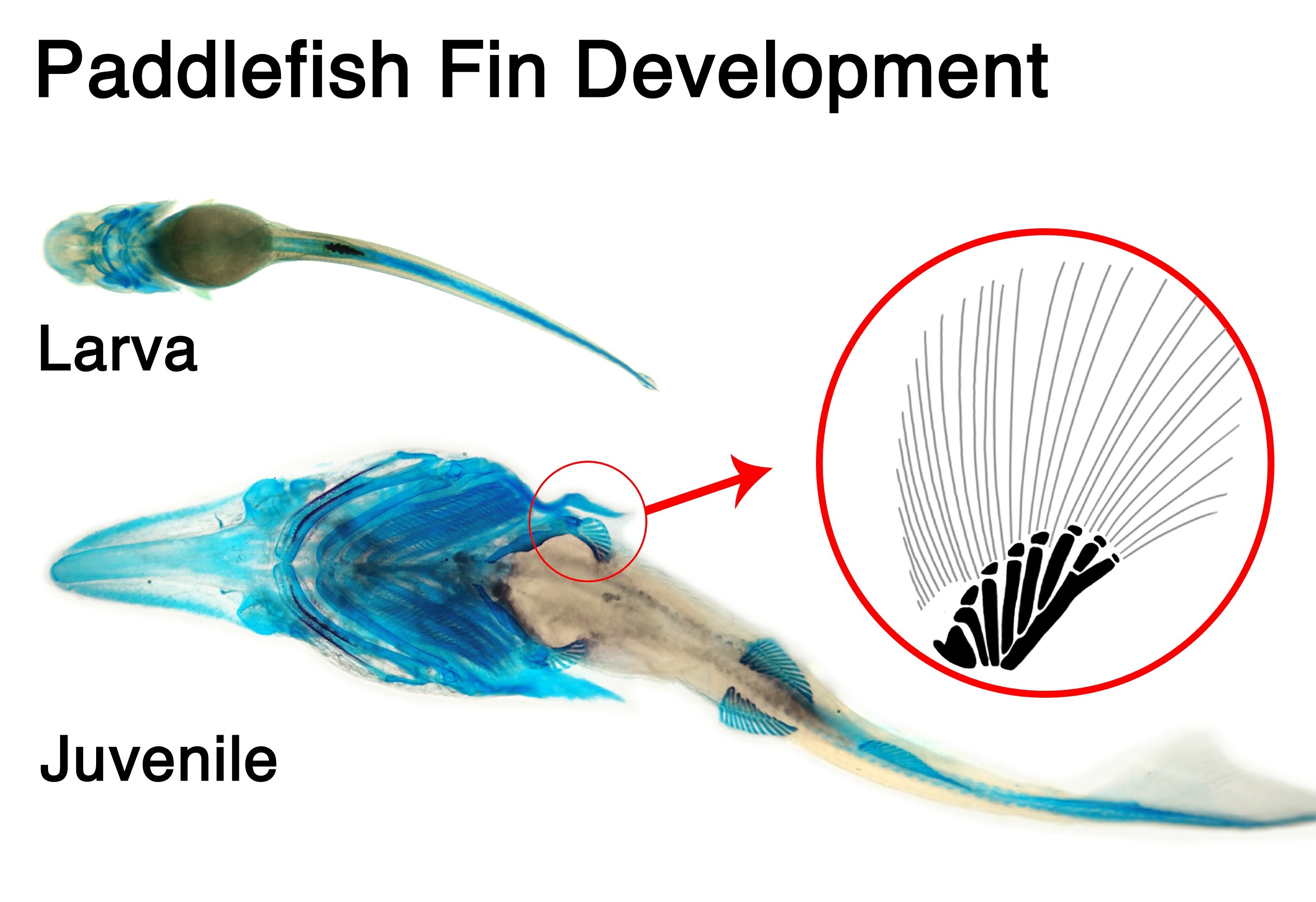 Larval and juvenile specimens of the North American paddlefish, Polyodon spathula, stained for developing cartilage. Inset shows the skeleton of the pectoral fin, the equivalent of the arms of land vertebrates (tetrapods). Photo by M.C. Davis

This is the first molecular support for the theory that the genes to help make fingers and toes have been around for a long time—well before the 375-million-year-old Tiktaalik roseae, the newly found species discovered in 2004 by Shubin and colleagues. Tiktaalik provided a missing evolutionary link between fish and tetrapods and was among the first creatures that walked out of water onto land.

Prior to this find, scientists had little evidence of where the wrist came from. A popular theory, one Shubin himself subscribed to, was that it was a novel development—that genetic variance gave rise to an entirely new function.

"This report provides important new information about the evolution of hands and feet in vertebrate animals," said Lance Grande, PhD, head of collections and research at the Field Museum.

Scientists have attacked the evolutionary quandary of limb development on two fronts: the direct evidence of the fossil record and the morphology, and its relationship with specific genetic mechanisms. What they needed, Davis said, was an animal "unmolested by time."

"So the innovation here is about a pattern of loss of gene activity [for the zebrafish] and not a pattern of acquisition [for tetrapods]," he said.

Although this pattern of genes clearly helps to make hands and feet today in tetrapods, that may not be their original intent, Shubin said. "Here’s a fish that doesn’t have an autopod but is still using those genes in a second phase to help pattern out a fin that doesn’t have fingers, never did, and is very far removed from tetrapods."

The capability of building limbs with fingers and toes existed for a long period of time, but it took a set of environmental triggers to make use of that capability.

According to Shubin, in the Late Devonian, animals like Tiktaalik and its descendants acquired limbs with fingers using this primitive design, largely because their ecosystem—the small streams that they lived in—was new.

"It had the tools," he said, "but it needed the opportunity as well."

The Shubin lab has expanded its studies to see if the Hox gene expression is present in yet older common ancestors. The research team now is studying the primitive fin development of sharks.