Life On Earth Still Favors Evolution Over Creationism
By The Conversation | September 11th 2014 05:30 AM | Print | E-mail 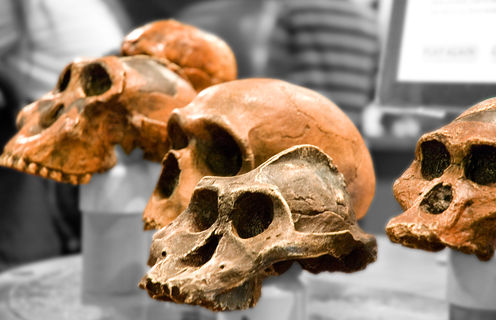 Charles Darwin’s Theory of Evolution, first published in 1859, offered a bold new explanation for how animals and plants diversified and still serves as the foundation underpinning all medical and biological research today. But the theory remains under attack by creationists in various parts of the world, particularly the US, Turkey, Indonesia and the Middle East.

Perhaps three of the most powerful ways to test evolution are through comparative genomics, homeobox genes and transitional fossils.

Collectively these provide solid evidence for evolution as a robust theory to account for the diversification of all life. So allow me to explore some recent discoveries in these fields.

The genome is the genetic material of an organism, comprising genes and non-coding sequences of DNA and RNA. The first organism sequenced for its entire genome – a bacteriophage (a bacterial virus) – was done in 1976 and it wasn’t until 1995 the first genome of a bacteria was completed.

By 2003 the human genome was sequenced in the world’s largest collaborative scientific project. It was found to be made up of 3 billion pairs of DNA bases that code 20,500 genes, the same number as in mice.

Today, a new generation of gene sequencers means that a human genome can be individually sequenced for around US$1,000.

Humans share 98.8% of their genes with chimpanzees. As we know the time at which divergent mutations accumulate between lineages, we can estimate that humans and chimpanzees last common ancestor (LCA) lived about 6-8 million years ago.

This date is supported by the known fossil evidence of ancient human species and prehistoric apes.

The coelacanth was thought to have gone extinct with the dinosaurs before a living one was caught off South Africa in 1938. It is a primitive lobe-finned fish whose genome sheds light on the early evolution of land animals.

Last year the whole genome of the coelacanth Latimeria chalumnae was sequenced. It is a living relic of a radiation of ancient lobe-finned fishes that reached their zenith of diversity about 300 million years ago.

The genome of the coelacanth has 19,033 genes. Within these, 251 genes common to all jawed vertebrates were selected and the comparative positions of the 100,583 amino acid positions were analyzed to see which sequences had the most similarity.

The resulting phylogeny (or evolutionary history of a species), showing inferred evolutionary relationships, supported the evidence from the fossil record. It proved that coelacanths diverged from the vertebrate tree well before the divergence of lungfishes and tetrapods (four-limbed species).

Whole genomes have been recently completed for the zebrafish, pufferfish, flatfish, elephant shark, chimpanzee, rat, platypus, chicken, dog, horse, wallaby and opossum as well as a range of invertebrate animals (such as fruit flies) and microorganisms.

Each time a whole genome of an organism is sequenced, its genetic diversity and complex protein patterning can be compared to other organisms whose genomes are known, and an evolutionary hypothesis generated based on the degree of similarity.

To date these results have all supported the existing theory of evolution from what we already knew about the anatomy of such organisms. It is powerful evidence for evolution as it would only take one such case to be out of the predicted phylogenetic position to challenge evolutionary theory, but this has not yet happened.

Homeobox genes (or “hox genes”) are involved in the development of patterns within an organism. They are basically the blueprint and toolkit that enables the body plan to get built, turning on or off the operation of other genes in the correct sequence as needed.

Hox genes are organized along the chromosome in the same order as the body parts they control.

The evolutionary significance of hox genes is profound. The very same hox genes occur within a wide range of organisms to do more or less the same job.

If you are an insect and you need to develop a leg then your sonic hedgehog (Shh) gene will be used. If you are vertebrate, whether a fish or human, likewise the Shh gene is put to use developing the fin or limb.

This shows that when fish evolved into land animals, some 370 million years ago, the transformation of the fish fin into a land animal limb was controlled by the same biological processes.

The Shh gene was also found to be active in sharks in developing the paired fins, demonstrating it is conserved for limb development in jawed vertebrate evolution.

It was recently discovered that fish also have the necessary genes and regulatory framework to form digits (fingers and toes) but do not develop them. So this step, developing digits, is only activated as a feature something unique to tetrapods.

Transitional fossils or “missing links" are fossils that show a mosaic of characters that place them as phylogenetically between two major groups of organisms. Archaeopteryx, one of the earliest fossil birds, dated at around 150 million years ago. Take the feathers away and you have a small theropod dinosaur skeleton. John Long, Flinders University

The first such famous fossil was Archaeopteryx, long hailed as the first “bird” because it had feathers but retained a reptilian skeleton. At around 150 million years old, it appeared earlier in the fossil record than any other known bird.

Today we know from extensive new studies of Archaeopteryx and the meat-eating theropod dinosaurs that it is just another feathered predatory dinosaur. Aurornis is another recently discovered feathered avian dinosaur similar to Archaeopteryx.

The most spectacular new fossil that closes a very major gap in vertebrate evolution is Entelognathus.

This 425 million-year-old armored fish, or placoderm, has a lower jaw and gular plates exactly like that of a bony fish (osteichthyan).

Recent work since 2009 has shown that placoderms were not a coherent (or monophyletic) group, but had several nodes in their evolutionary tree, with the higher nodes being closer to living fishes. The Entelognathus armored fish is the most primitive vertebrate to display an essentially modern complement of jaw and facial bones. Credit: Brian Choo

Entelognathus appears much earlier in time than the majority of placoderms, implying the major diversification of the group took place just after its initial appearance about 440 million years ago.

Only five years ago, the world’s oldest known bony fish, Guiyu, was announced from the same deposits in Yunnan, China, where Entelognathus was found.

The real surprise was that this ancient bony fish had spines in front of its fins and bony plates forming a rigid armor around it body. These are both features of placoderms and other early jawed vertebrates.

The transition from fishes to amphibians is clearly shown by these Late Devonian fossil forms. Tiktaalik (left), a lobe finned fish, has fin rays on its limbs, whereas Acanthostega (right), an early amphibian, possessed digits. The skulls are almost identical. John Long, Flinders University

Another truly spectacular transitional fossil found in recent years was the lobe-finned fish Tiktaalik, which lived about 375 million years ago in what is today Arctic Canada.

It was a four-legged fish which has a skull identical to that of an early tetrapod (amphibian), but had fin rays instead of digits on the ends of its limbs. Like Archaeopteryx and all other transitional fossils, it really depends on your perspective as to where it sits on the tree of life. One could view it either as a “fish with limbs” or an early “amphibian with fins”.

Tiktaalik beautifully demonstrates an intermediate evolutionary condition when advanced lobe-finned fishes had acquired most of the anatomical features necessary to become tetrapods.

And then there is the fossil evidence

Perhaps the strongest evidence for evolution today is simply the hundreds of millions of fossils held in museums and other collections around the world.

At the Page Museum in Los Angeles there are 3.5 million fossil bones in one building, and that’s just one of many hundreds if not thousands of museums, universities, geological surveys and privately owned collections containing fossils from around the world. Some of the many dire wolf skulls held at the Page Museum. Brian Choo

If just one of these fossils was found out of its predicted stratigraphic position it could disprove evolution.

Finding a mammal in the Cambrian Period or a dinosaur in the Devonian Period would instantly disprove evolution. But out of the hundreds of millions of fossil specimens collected and studied so far, not one has been found from any rock layer where it shouldn’t be expected according to evolutionary theory.

Now that’s irrefutable evidence for the reliability of evolution. If it wasn’t reliable, we wouldn’t be able to depend upon fossils from drill cores to locate the natural gas and petroleum deposits that we use in everyday life.

John Long, Strategic Professor in Palaeontology at Flinders University, receives funding from The Australian Research Council for his research.