The image showed thunderstorms wrapping tightly around the center of the storm while one broken band of thunderstorms extended to the northwest, while the other appeared on the eastern side of the center and paralleled the southern Mexican coastline. 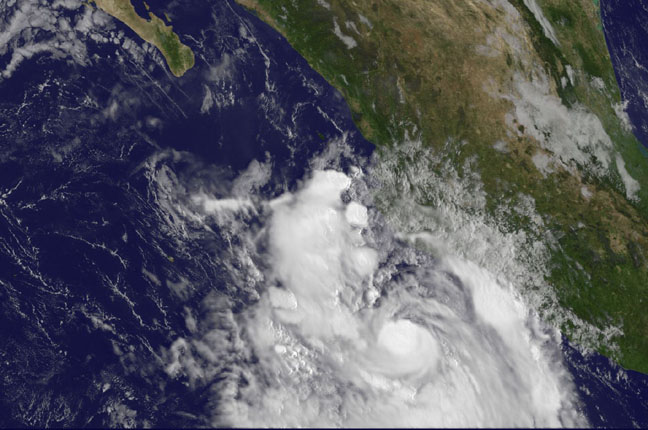 Forecasters from the National Hurricane Center (NHC) examining satellite imagery today, Sept. 18 noted that "there is a small central dense overcast surrounded by a cyclonically curved convective band (a band of thunderstorms). Polo has the opportunity to strengthen before the northeasterly wind shear increases in 24 hours before it is expected to gradual weaken.

At 11 a.m. EDT on Sept. 18, the center of Hurricane Polo was located near latitude 17.3 north and longitude 105.7 west. That's about 150 miles (240 km) southwest of Manzanillo, Mexico. Maximum sustained winds were near 75 mph (120 kph) and some slight strengthening is possible in the next day, according to the NHC. Polo is moving toward the northwest near 8 mph (13 kph) and is expected to continue in that direction for the next couple of days.

NHC noted that Polo will move parallel to the southwestern coast of Mexico, although any deviation from the forecast track could mean stronger winds to the coast. After Sept. 19, Polo is expected to weaken.