The public may be critical of the War On Cancer and its hundreds of billions of government money, but pharmaceutical companies have continue to make progress. A new study finds that 80 percent of bowel cancers could be treated with existing JAK inhibitors.

The risk of getting colorectal cancer increases with age, more than 90% of cases occur in people 50 years old or older, and it is the second leading cause of cancer death in the US. But there is a genetic commonality in 80 percent of those, and that is where JAK inhibitors come into play.

Dr. Toby Phesse  the Walter and Eliza Hall Institute said more than 80 percent of bowel cancers were driven by a defect in the Wnt signaling pathway. "This genetic defect triggers a high level of signaling in the pathway, leading to uncontrolled cell growth and therefore cancer. Targeting Wnt signaling directly as a treatment for bowel cancer presents several challenges as normal cells in the intestine rely on low levels of Wnt signaling to renew and keep the gut healthy. Blocking Wnt might prevent tumor growth but it could also cause significant damage to the intestines." 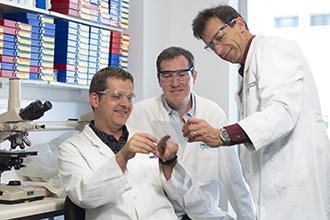 However, tumor cell growth can also be stimulated by another signaling pathway, involving proteins known as JAKs (Janus kinases). The research team examined whether targeting this parallel pathway could limit tumor growth without affecting the normal cells of the intestine.

Multiple JAK inhibitors are now in use, or are in clinical trials, for diseases including rheumatoid arthritis, psoriasis, blood cancers and myeloproliferative disorders.

"Our research showed that blocking JAK proteins could inhibit tumor growth in preclinical models of bowel cancer and human bowel cancer cells that have high levels of Wnt signaling," Phesse said. "Importantly, we didn't see any side effects in our pre-clinical models as Wnt signaling could still function in the normal cells of the intestine, as JAK inhibitors only block cell growth in cells with very high Wnt signaling, such as those found in the tumors. This makes it a very attractive therapy for bowel cancer."

Dr. Michael Buchert said the results were significant, as several JAK inhibitors have been approved for clinical use for other diseases. "Clinical trials have already shown that JAK inhibitors are safe for human use," he said. "We hope that this will enable our research to rapidly reach clinical trials for bowel cancer patients and deliver benefits in the near future."