Electronic devices that can be injected directly into the brain, or other body parts, have been a staple of science fiction for decades - and they seem a little closer to reality if you visit Charles Lieber's chemistry lab at Harvard.

A team of international researchers, led by Lieber, has developed a method for fabricating nano-scale electronic scaffolds that can be injected via syringe. Once connected to electronic devices, the scaffolds can be used to monitor neural activity, stimulate tissues and even promote regenerations of neurons.

In an earlier study, scientists in Lieber's lab demonstrated that the scaffolds could be used to create "cyborg" tissue - when cardiac or nerve cells were grown with embedded scaffolds. Researchers were then able to use the devices to record electrical signals generated by the tissues, and to measure changes in those signals as they administered cardio- or neuro-stimulating drugs. 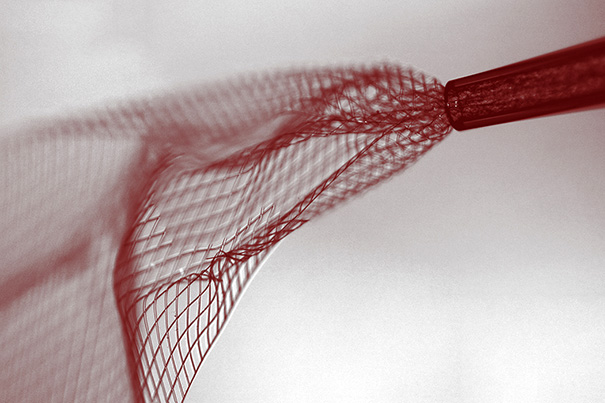 "We were able to demonstrate that we could make this scaffold and culture cells within it, but we didn't really have an idea how to insert that into pre-existing tissue," Lieber said. "But if you want to study the brain or develop the tools to explore the brain-machine interface, you need to stick something into the body. When releasing the electronics scaffold completely from the fabrication substrate, we noticed that it was almost invisible and very flexible like a polymer and could literally be sucked into a glass needle or pipette. From there, we simply asked, would it be possible to deliver the mesh electronics by syringe needle injection, a process common to delivery of many species in biology and medicine - you could go to the doctor and you inject this and you're wired up.'"

Though not the first attempts at implanting electronics into the brain - deep brain stimulation has been used to treat a variety of disorders for decades - the nano-fabricated scaffolds operate on a completely different scale.

"Existing techniques are crude relative to the way the brain is wired," Lieber explained. "Whether it's a silicon probe or flexible polymers...they cause inflammation in the tissue that requires periodically changing the position or the stimulation. But with our injectable electronics, it's as if it's not there at all. They are one million times more flexible than any state-of-the-art flexible electronics and have subcellular feature sizes. They're what I call "neuro-philic" - they actually like to interact with neurons.."

Despite their enormous potential, the fabrication of the injectable scaffolds is surprisingly easy.

"That's the beauty of this - it's compatible with conventional manufacturing techniques," Lieber said.

The process is similar to that used to etch microchips, and begins with a dissolvable layer deposited on a substrate. To create the scaffold, researchers lay out a mesh of nanowires sandwiched in layers of organic polymer. The first layer is then dissolved, leaving the flexible mesh, which can be drawn into a syringe needle and administered like any other injection.

After injection, the input/output of the mesh can be connected to standard measurement electronics so that the integrated devices can be addressed and used to stimulate or record neural activity.

Published in a June 8 paper in Nature Nanotechnology.