News Staff
Pulsars are superdense neutron stars, the remnants left after massive stars have exploded as supernovae. Their powerful magnetic fields generate lighthouse-like beams of light and radio waves that sweep around as the star rotates. Most rotate a few to tens of times a second, slowing down over thousands of years.

Some, dubbed millisecond pulsars, rotate hundreds of times a second. Astronomers believe the fast rotation is caused by a companion star dumping material onto the neutron star and spinning it up. The material from the companion would form a flat, spinning disk around the neutron star, and during this period, the radio waves characteristic of a pulsar would not be seen coming from the system. As the amount of matter falling onto the neutron star decreased and stopped, the radio waves could emerge, and the object would be recognized as a pulsar. 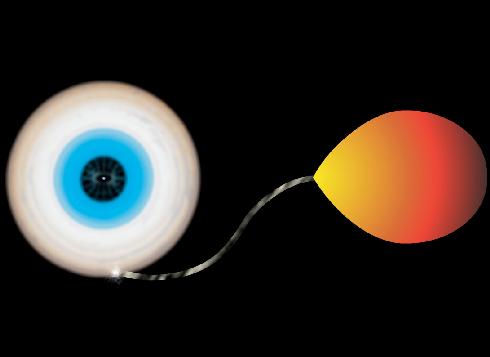 This sequence of events is apparently what happened with a binary-star system some 4000 light-years from Earth. The millisecond pulsar in this system, called J1023, was discovered by the National Science Foundation's (NSF) Robert C. Byrd Green Bank Telescope (GBT) in West Virginia in 2007 in a survey led by astronomers at West Virginia University and the National Radio Astronomy Observatory (NRAO).

The astronomers then found that the object had been detected by NSF's Very Large Array (VLA) radio telescope during a large sky survey in 1998, and had been observed in visible light by the Sloan Digital Sky Survey in 1999, revealing a Sun-like star.

When observed again in 2000, the object had changed dramatically, showing evidence for a rotating disk of material, called an accretion disk, surrounding the neutron star. By May of 2002, the evidence for this disk had disappeared.

That's right, in a short period of time the unique double-star system J1023 had changed identities.

"This strange behavior puzzled astronomers, and there were several different theories for what the object could be," said Ingrid Stairs of the University of British Columbia, who has been visiting the Australia Telescope National Facility and Swinburne University this year.

The 2007 GBT observations showed that the object is a millisecond pulsar, spinning 592 times per second.

"No other millisecond pulsar has ever shown evidence for an accretion disk," Archibald said. "We know that another type of binary-star system, called a low-mass X-ray binary (LMXB), also contains a fast-spinning neutron star and an accretion disk, but these don't emit radio waves. We've thought that LMXBs probably are in the process of getting spun up, and will later emit radio waves as a pulsar. This object appears to be the 'missing link' connecting the two types of systems," she explained.

"It appears this thing has flipped from looking like an LMXB to looking like a pulsar, as it experienced an episode during which material pulled from the companion star formed an accretion disk around the neutron star. Later, that mass transfer stopped, the disk disappeared, and the pulsar emerged," said Scott Ransom of the NRAO.

"This system gives us an unparalled 'cosmic laboratory' for studying how millisecond pulsars evolve," Stairs said. Maura McLaughlin, of West Virginia University, agrees: "Future observations of this system at radio and other wavelengths are sure to hold many surprises."

Archibald, Ransom, Stairs and McLaughlin are members of an international scientific team with representatives from McGill University, the University of British Columbia, the NRAO, West Virginia University, and others. The scientists announced their discovery in the May 21 online issue of the journal Science.

The National Radio Astronomy Observatory is a facility of the National Science Foundation, operated under cooperative agreement by Associated Universities, Inc.
News Articles
More Articles All Articles
About