News Staff
In an interstellar race against time, astronomers measured the space-time warp in the gravity of a binary star and determined the mass of a neutron star just before it vanished from view.

The researchers measured the masses of both stars in binary pulsar system J1906. The pulsar spins and emits a lighthouse-like beam of radio waves every 144 milliseconds. It orbits its companion star in a little under four hours.  The mass of only a handful of double neutron stars have ever been measured, with J1906 being the youngest. It is located about 25,000 light years from Earth.

According to general relativity, neutron stars wobble like a spinning top as they move through the gravitational well of a massive, nearby companion star. Orbit after orbit, the pulsar travels through a space-time that is curved, which impacts the star's spin axis. 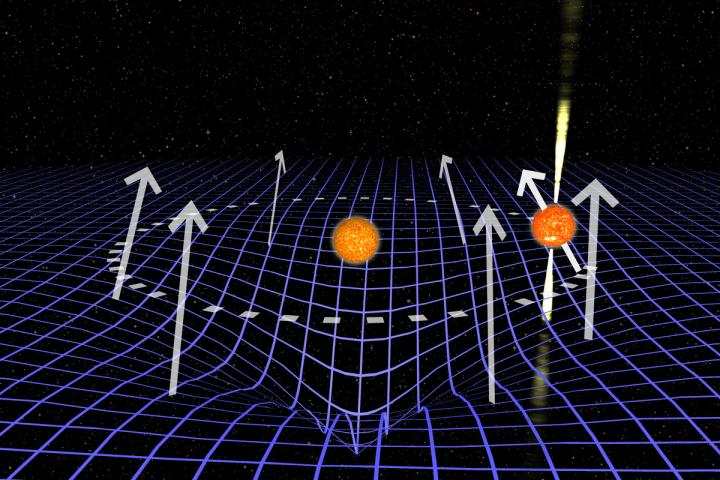 One orbit of pulsar J1906 (on the right, with radio beams) around its companion (centered), with space-time curvature (blue grid). Credit: Joeri van Leeuwen.

"By precisely tracking the motion of the pulsar, we were able to measure the gravitational interaction between the two highly compact stars with extreme precision," says Ingrid Stairs, professor of physics and astronomy at the University of British Columbia.  "These two stars each weigh more than the Sun, but are still over 100 times closer together than the Earth is to the Sun. The resulting extreme gravity causes many remarkable effects."

"Through the effects of the immense mutual gravitational pull, the spin axis of the pulsar has now wobbled so much that the beams no longer hit Earth," explains Joeri van Leeuwen, an astrophysicist at the Netherlands Institute for Radio Astronomy, and University of Amsterdam, who led the study.  "The pulsar is now all but invisible to even the largest telescopes on Earth. This is the first time such a young pulsar has disappeared through precession. Fortunately this cosmic spinning top is expected to wobble back into view, but it might take as long as 160 years."


Effect of geodetic precession in the observer pulsar. Two neutron stars orbit one another. The star visible as a pulsar shows rotating beams. The companion is frozen at the frame center. Credit: Joeri van Leeuwen