The XZ Tauri star system has been imaged blowing a hot bubble of gas into the surrounding space, which is filled with bright and beautiful clumps that are emitting strong winds and jets. These objects illuminate the region, creating a truly dramatic scene.

This dark and ominous landscape is located some 450 light-years away in the constellation of Taurus The Bull. It lies in the north-eastern part of a large, dark cloud known as LDN 1551, as seen in the Hubble telescope image below..

Just to the left of center in this image, embedded within a rust-coloured cloud, lies XZ Tauri. While it appears to be a single star, this bright spot actually consists of several stars. It has long been known to be a binary, but one of these two stars is thought also to be a binary, making a total of three stars within a single system. 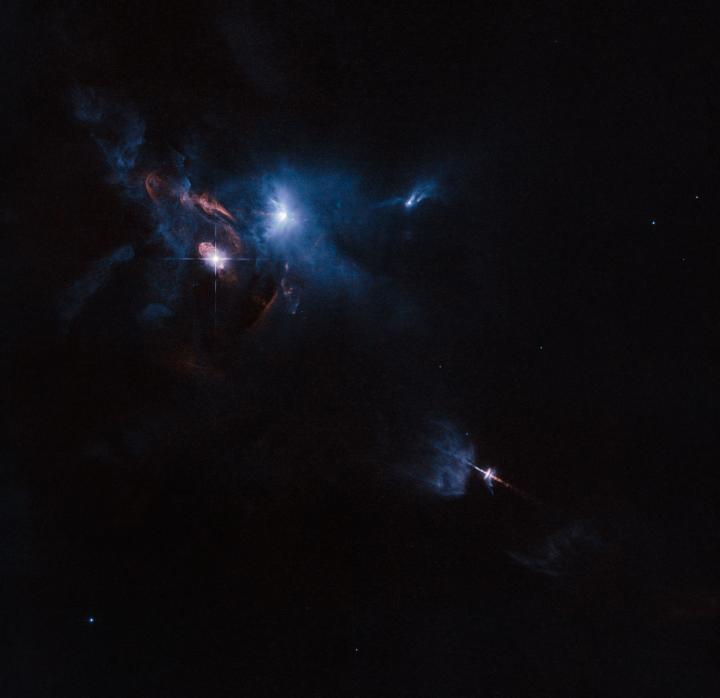 This is not the first time that Hubble has observed XZ Tauri -- between the years 1995 and 2000, a hot bubble of gas was spotted expanding outwards from the system. This bubble can be seen as the small orange lobe very close to the top left of XZ Tauri. This gas is speeding out from the star system, leaving a trail spanning tens of billions of kilometres. As the bubble travels it hits slower moving material, triggering pulses of light and rippling shockwaves.

Above and to the right of XZ Tauri, an equally epic scene is unfolding. Wisps of deep red seem to be streaking away from the blue-tinged clumps on the right. This bright blue patch contains a star known as HL Tauri, which is associated with Herbig-Haro object HH 150. Herbig-Haro objects are streaks of hot gas blasted into space by newborn and newly forming stars and LDN 1551 is particularly rich in these dramatic objects.

In the bottom right of this Hubble image is another Herbig-Haro object known as HH 30, associated with the variable star V1213 Tauri. The star itself is hidden within a flat, bright disc of dust that is split in half by a dark lane. This dust blocks direct light from V1213 Tauri, but the star is visible via its reflected light and the prominent, knotty jets it is blasting out into space.

Hubble previously viewed HH 30, alongside XZ Tauri, with its Wide Field Planetary Camera 2 between the years of 1995 and 2000. The observations were used to image and study the changes in disc brightness and jet strength over the five-year period. V1213 Tauri's strong magnetic field forms the jets by funnelling and shepherding gas from the disc, accelerating it along the star's magnetic poles to form two narrow beams.

A version of this image was entered into the Hubble's Hidden Treasures image processing competition by contestant Judy Schmidt, and won third prize.

In a press release issued by the European Southern Observatory today observations from the Atacama Large Millimeter/submillimeter Array (ALMA) reveal extraordinarily fine and never-before-seen detail in the planet-forming disc around HL Tauri. The new observations are an enormous step forward in the observation of how protoplanetary discs develop and how planets form.