Human bathroom walls contain messages that are wonderfully informative about our modern condition - they can tell you who to call if you have an evolutionary mandate to procreate or even notify you that someone else once peed in the same spot.

White-footed sportive lemurs learn a lot about each other due to bathrooms also. Only instead of writing on the walls, they use scent-marks to communicate with their own kind. A study published online in Behavioral Ecology and Sociobiology by Iris Dröscher and Peter Kappeler from the German Primate Center (DPZ) found that the urine left on latrine trees serves as a method to maintain contact with family members. It also serves as a means to inform an intruder that there is a male that will defend his partner.

Latrines thus serve as information exchange centers and promote social bonding in territorial nocturnal animals that do not live in closely-knit groups. 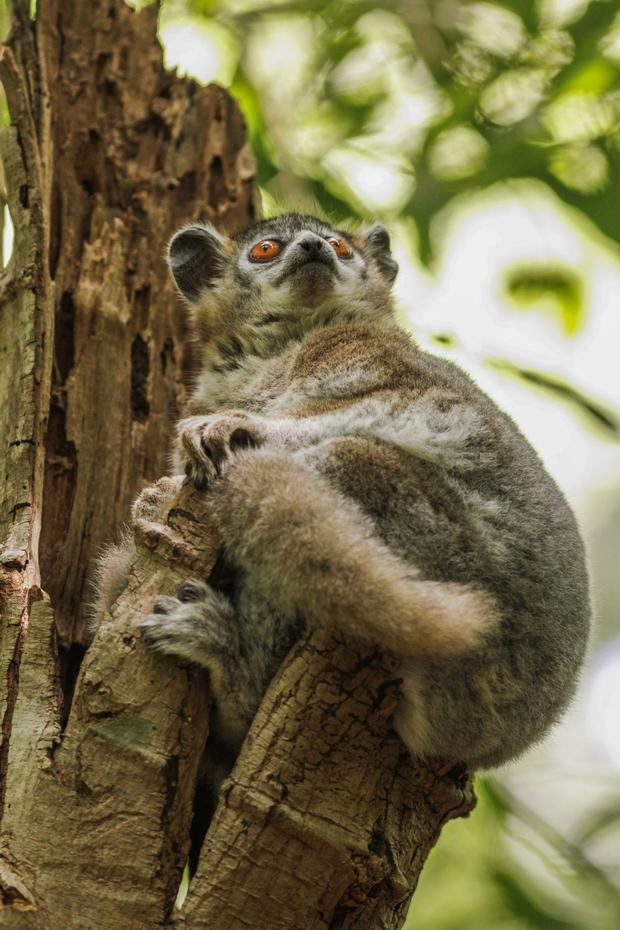 In the animal kingdom, the use of latrines, which serve as specific locations for urination and defecation, is a common occurrence. Because little is known about why primates, in particular, use the same latrines over and over, the researchers set out to investigate this phenomenon among white-footed sportive lemurs (Lepilemur leucopus) in southern Madagascar.

Do they hint to others that they want to defend their mate or territory? Or, do they indicate the fertility of the female? Or do they promote exchange of information within a group and support social bonding?

To answer these questions, the researchers wanted to establish where such latrines were found, and if they were used differently between seasons and between individuals of different ages and sexes. In the process, Dröscher and Kappeler spent over 1,000 hours watching the toilet habits of 14 radio-collared adult sportive lemurs.

White-footed sportive lemurs are nocturnal tree-dwellers that are found exclusively in southern Madagascar. They live together in families consisting of parents and their offspring. Even though the family members share a common territory, the individuals do not interact much. Neither do pair-partners sleep in the same tree nor do they associate while foraging. But what they have in common are latrines that are located in the core of their territory.

All members of the family visit the same latrines for defecation and urination. Dröscher and Kappeler believe the latrines are a way in which to maintain familiarity and social bonding among members of a social unit, who otherwise have very little contact with each other. Such scent signals are picked up from urine that stains the tree trunks rather than feces that accumulate on the ground under the trees.

Males visited the latrines more often during nights when an intruder invaded the territory. In addition, the males placed scent marks from their specialized anogenital glands preferentially in latrines. "This indicates that latrine use in this primate species should also be connected to mate defense," says Iris Dröscher, a PhD student at the German Primate Center.

"Scent marks transmit a variety of information such as sexual and individual identity and may function to signal an individual's presence and identity to others," continues Dröscher. "Latrines therefore serve as information exchange centers of individual-specific information."

"Especially nocturnal species with limited habitat visibility and low inter-individual cohesion profit from predictable areas for information exchange to facilitate communication," says Peter Kappeler, head of the Department for Behavioral Ecology and Sociobiology at the DPZ. "The white-footed sportive lemur has found these information centers by means of latrine use."