News Staff
21st century computer modelling software has enabled a long-lost, trumpet-like instrument called the  Lituus to be recreated – even though no one alive today has heard, played or even seen a picture of this forgotten instrument - allowing a work by Bach to be performed as the composer may have intended for the first time in nearly 300 years.

Generally acknowledged to be one of the greatest composers of all time, Johann Sebastian Bach was born in the German town of Eisenach in 1685 and produced over 1000 sacred and secular musical compositions. He died in Leipzig in 1750, at the age of 65.

Although made mainly of wood, the Lituus is actually classified as a brass instrument, on account of the way it is played.   Bach’s cantata ‘O Jesu Christ, meins lebens licht’ (BWV 118) was probably composed and first performed in Leipzig in 1736-37. The scoring specifies the use of ‘two Litui’ alongside other instruments. 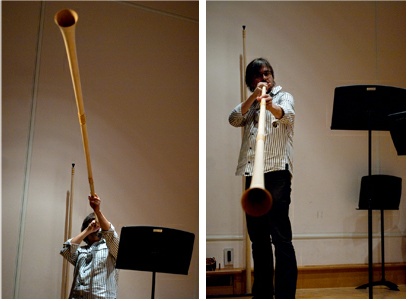 The software was originally developed by a University of Edinburgh PhD student, funded by the Engineering and Physical Sciences Research Council (EPSRC), with the aim of optimizing the design of modern brass instruments. Computer modelling is an emerging technology in instrument manufacture, but the new software offers unprecedented accuracy in terms of ensuring a brass instrument’s design delivers the required shape, pitch and tone.

Following its use to improve trombone design, the software has been deployed to help the Schola Cantorum Basiliensis (SCB), who asked the University to recreate the Lituus.  The SCB are a Swiss-based music conservatoire specialising in early music, they gave the Edinburgh team their expert thoughts on what the Lituus may have been like in terms of the notes it produced, its tonal quality and how it might have been played. They also provided cross-section diagrams of instruments they believed to be similar to the Lituus.

“The software used this data to design an elegant, usable instrument with the required acoustic and tonal qualities,” says Dr Alistair Braden, the software’s designer. “The key was to ensure that the design we generated would not only sound right but look right as well.”

Professor Murray Campbell, who supervised the software’s development, adds: “Crucially, the final design produced by the software could have been made by a manufacturer in Bach’s time without too much difficulty.”

SCB has now used Edinburgh’s designs to build two identical examples of the long-lost instrument. Two and a half metres long, made from pine and with a mouthpiece made of cow horn, the instruments are thin, completely straight and have a flared ‘bell’ at the end.

Both were used in an experimental performance of the cantata ‘O Jesu Christ, meins lebens licht’ in Switzerland earlier this year. Written by Bach in the 1730s, it is thought that this is the only piece of music still existing that specifies the use of the Lituus – and has almost certainly not been performed using the Lituus since Bach’s time.


“Sophisticated computer modelling software has a huge role to play in the way we make music in the future,” comments Campbell.

The software opens up the possibility that brass instruments could be customised more closely to the needs of individual players in the future – catering more closely for the differing needs of jazz, classical and other players all over the world.

Similar software could be used to pinpoint leaks in hard-to-access pipework and ducting in power stations and elsewhere. Analysis of acoustic signals sent through pipework etc would enable computer models to be constructed that accurately show its condition, aiding safety and avoiding the need for shutdowns to carry out inspections.

The Schola Cantorum Basiliensis is a music conservatoire based is Basle, Switzerland. For more information, see http://www.scb-basel.ch/index/112998