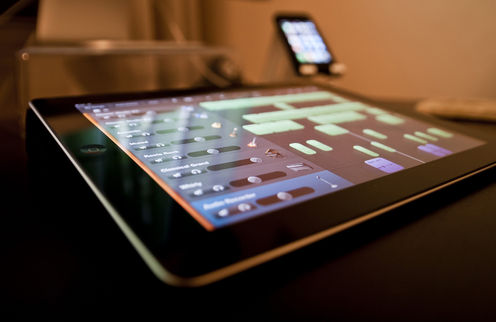 Does this count as homework? Credit: Rob Boudon, CC BY

By Mark Banks, University of Leicester

The urge to make new music is alive and well among young people in the UK, but not always using conventional instruments in the classroom or school orchestra. A new survey of music education has found that 40% of children make music outside of school with friends and 20% have made music using a smartphone or tablet.

The Making Music report, published by the Associated Board of the Royal Schools of Music, found that “learners are taking more control of their own music making”, with “peer-to-peer” music production now more popular.

It seems that a significant part of an encouraging overall rise in the number of children playing music can be attributed to the playing of devices and technologies that aren’t commonly regarded as musical instruments at all.

The report found that since 1999, the percentage of children claiming to “know how to play a musical instrument” has risen from 41% to 76%. Now 62% of children have had some kind of instrumental lessons compared with fewer than a half of adults.

There has been a general increase in children taking both school and private music lessons, and evidence that around 80% of music teachers feel satisfied and fulfilled in their work. All this seems to suggest that current policies of music education are having a positive effect. It could be a sign of class. Khairil Zhafri, CC BY

Children of the less well-off, however, are much more likely than their affluent counterparts to play something other than a conventional instrument. While children in the highest social classes (A and B) still tend to play piano, brass or woodwind, the majority of children (65%) in the lower bands (C2, D and E) now claim to mainly play “other” instruments than those offered by the classical orchestra, or pop music instruments such as the electric guitar.

What these “other” instruments might be isn’t wholly specified – but it does appear to include the kind of smart and mobile technologies that allow for social and Do It Yourself (DIY) music production, without the cost of lessons or conventional instrumentation. With around 81% of 12 to 17-year-olds estimated to own a smartphone, as well as 45% of under 12s, the opportunities for self and community music-making appear to have become much more widespread.

This is not quite a triumph for music education. Much of the music-making undertaken by ordinary children goes unheralded or unnoticed. The music curriculum continues to focus on standard instrumentation and conventional musical training. This might be fine if all groups were able to benefit.

This means that despite many efforts to widen access, attempts to provide the poorest children with a music education continue to hit a bum note.

This is not to say that schools and teachers are failing. It is to the great credit of music educators that they continue to provide children of all social backgrounds with the best education that limited resources and an unlimited imagination can provide.

But austerity has hit music education especially hard. As the Making Music report identifies, public funding for music education has fallen from £82.5 million in 2010 to £58 million in 2014. The overall provision in schools continues to be patchy and piecemeal, with many primary schools providing barely any music teaching at all – a theme recently explored by the Channel 4 TV show Don’t Stop the Music.

The much-vaunted Music Education Hubs launched in 2012 to replace existing local authority-run services appear to have met with limited success. A recent funding boost of £18m for music education may offer some help. But a continued reliance on thinly-spread pools of peripatetic and part-time teachers, many now effectively working on zero-hours contracts, suggests that despite reporting great “job satisfaction”, means many educators are being asked to work miracles on a subsistence wage and shoestring budget.

If the majority of children from lower-income homes now make music through other means than standard instruments and training, what implications might this have for schools struggling to offer the conventional diet of piano, flute and trumpet? The creative energies of these ordinary children who clearly love music – but remain excluded from formal tuition – could be brought into the classroom in new ways.

The battle for better-funded and inclusive music education must surely continue. But finding ways to bring the tools and techniques of this new generation of “hidden musicians” into the classroom might be one way of raising levels of participation and progress among those who might otherwise fail to fully benefit from the joys of making music.

Mark Banks, Professor of Culture and Communication at University of Leicester, does not work for, consult to, own shares in or receive funding from any company or organization that would benefit from this article, and has no relevant affiliations.